Railway Bridge over Leeds and Liverpool Canal at Ainscough's Mill 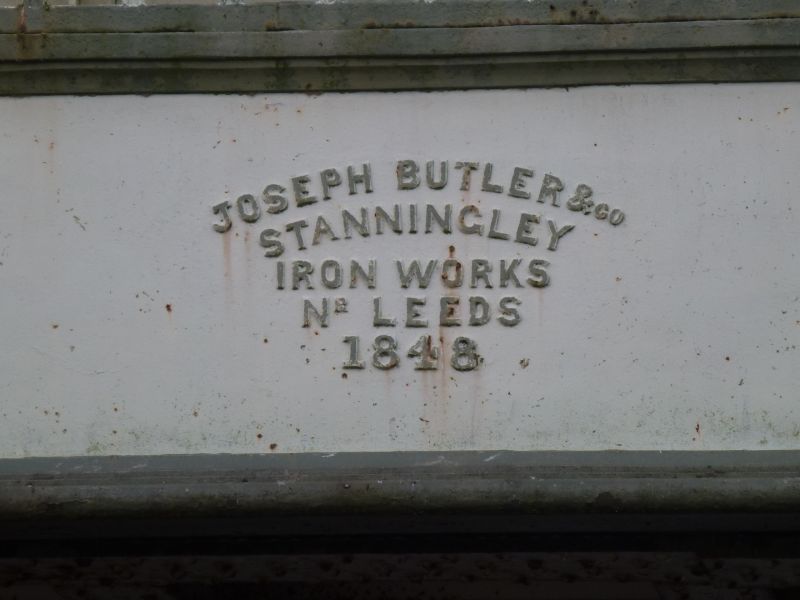 Railway bridge over canal. 1848 for the East Lancashire Railway, altered early C20 for the Lancashire and Yorkshire Railway. Stone, cast iron and steel.
squared rock faced limestone abutments with dressed stone capping. Cast iron
face girders in four panels, decorative cast iron railings above. Each face girder carrries the inscription:-
JOSEPH BUTLER & Co STANNINGLEY IRON WORKS Nr LEEDS 1848
The girders which carry the track are rivetted steel plate girders and date
from the early C20. This bridge is a particularly good example of a cast iron railway bridge partially replaced with steel, something which happened all over the system following the collapse of the London, Brighton and South Coast Railway's Portland Road bridge in Croydon in 1891. Its original appearance is unaltered on the outer faces, the girders are dated and have their makers name and the railings are complete. This bridge is one of an important series of bridges over the Leeds and Liverpool canal and it has group value with the immediately adjacent Ainscoughs Mill.
History: This bridge was built as a part of the East Lancashire Railway which opened 2/4/1849.
This company was a constituent of the Lancashire and Yorkshire Railway on formation in 1859.
The track was singled in the 1960's but the line remains open.