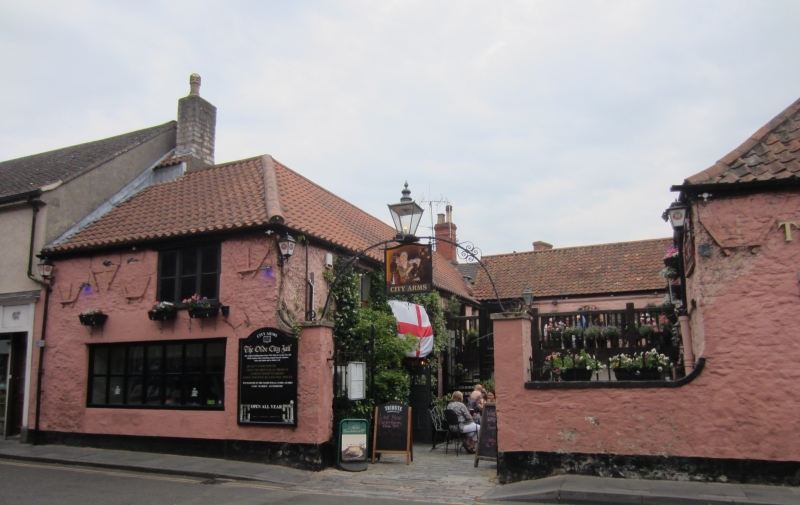 Inn. C16, with much later revision. Local stone rubble
colourwashed. Clay pantiled roofs, brick and stone chimney
stacks
PLAN: U-plan around courtyard, with access off High Street,
and flank to Queen Street.
EXTERIOR: 2 storeys. East unit has one-bay end wall to street,
with vertical boarded door in part-blocked cart opening, and a
3-light horizontal bar casement above. Return along courtyard
of 4 bays: lower bay 1 has a metal casement window painted
over; bay 2 has pane sashes both levels, lower bay 3 has a
pair of part-glazed doors; to upper bays 1 and 3 are C17
timber-frame windows with ovolo-mould mullions, adopted; bay 4
has a C20 casement window at upper level.
The south wing at the end of the courtyard features an open
timber staircase which serves a doorway to upper bay 1 of 3
bays. C20 timber casement windows to upper bays 2 and 3, and
below are two C20 windows based on C17 borrowed light such as
survive at No.6 High Street (qv) featuring turned balusters.
The courtyard elevation of the west wing dominated by a leanto
verandah with clay pantiled roof, between the uprights are
balustrades of a C17 pattern although of C20 build. This
elevation 5 bays random fenestration. Bay 1, 3 and 4 have
ovolo- mould timber-frames at upper level, with blocked window
bay 2 and blank bay 5, below, bays 1 and 2 have windows on the
"borrowed light" theme, and to bay 3 french doors to match.
Bay 4 has a reserve chamfer stone surround single-light window
with two sets of iron grilles, with a blocked segmental
archway to right, and bay 5 has 2 modern casements with iron
bars flanking a chamfered segmental arched doorway which has
what appears to be an early door.
Plain end elevation to High Street, but on the curve into
queen Street a 16-pane sash window at first floor level.
3 bay elevation to Queen Street, with 16-pane sash window
upper bay 1. Signboard to bay 2, over a C20 casement windows.
12-pane casement to upper bay 3 and old 3-light frame below,
possibly an adopted ovolo-mould pattern.
INTERIOR: the east wing was badly damaged by fire, so little
remains. The south wing appears totally modern. The ground
floor of the west wing was totally reconstructed c1987, but
the upper room has an open ceiling exposing the collar truss
roof frame, basically old although the collars have been sawn
off and reset at a higher level-there is also other misleading
applied timberwork.
The premises served until c1800 as the common gaol. The stone
setts to the courtyard of significance to the general setting.
(Serel T: Lecture on History of Wells: 1858-).