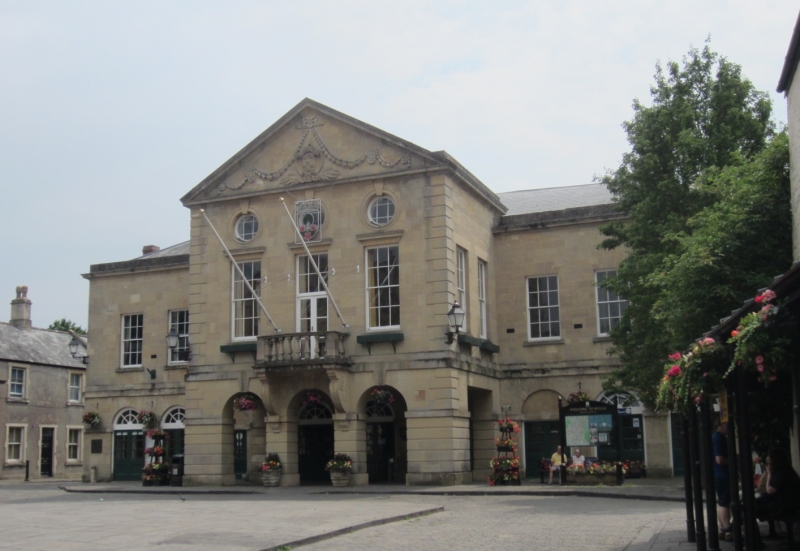 Town Hall, with magistrates courts and other offices. 1779,
with extension of 1907 and 1932/33. Ashlar stone facade,
rubble stone extension, English garden wall brickwork to rear
wing, hipped Welsh slate roofs, ashlar chimney stacks.
PLAN: entrance hall flanked by Court Room and lesser rooms,
through screen and stair to main Hall at first floor; long
rear wing including cells.
EXTERIOR: 2 storeys with attics to centre, 9 bays, with a
2-bay forwards projection of 1907 for the 3 centre bays. In a
classical style. Plinth, rusticated piers and quoins to centre
unit, band course between floors, shallow parapet. All ground
floor originally arcaded with open semicircular arches, now
filled with doors and glazing along line of original facade,
large 12-pane sash windows to first floor.
Central projection to match, but open at ground floor level,
and central bay first floor has french doors opening to large
stone balcony with balustrading, carried on very large
scrolled brackets; at attic level 3 circular windows, in
bolection mould architraves with keystones, pediment over with
thin garlands and city coat of arms. The 3 oculi and the
balcony are work of the 1932 alterations. Matching 2-bay
extension to right. East return of 3 bays has ashlar on ground
floor only, with arcading, 2 bays with paned french windows
and fanlights, and one with fanlight only.
Extension to rear of 1907; 2 storeys and 10 bays, with 7 plain
sash and 3 smaller lights to first floor above 9 barred cell
windows, including a door below window 6, and a further
doorway to the right. This unit with hipped slate roof.
INTERIOR: entrance hall has 2 unfluted Doric columns on
pedestals carrying longitudinal beams and 2 transverse deep
square beams, probably inserted later; to each side, through
paired arches, is a heavily detailed stone staircase with
raked square balusters. Main stair, of C20, is through three
arches, to 8 wide steps, through a further screen wall to the
principal staircase returning towards the front. Main hall has
dado rail, modillion cornice, but this not carried through to
end bay, with proscenium arch having panelled reveals and
soffit. On the W side are 2 fireplaces with bolection mould
surrounds, and four 6-panel doors in raised moulded
architraves, and with panelled linings; at the far (S) end are
two 6-panel doors under sloping heads and with panelled
linings, below three 12-pane sashes (but top sash pivoted).
The ceiling has a central rosette and 4 circular cast-iron
vents. The Court Room has a circular central ventilator;
fittings are late C20.
HISTORICAL NOTE: built by public subscription on the site of
the Canonical House also known as 'The Exchequer', on the
authority of an Act of Parliament dated 1779, this replaced an
earlier structure nearer the centre of the Market Place '...
supported by stone columns, and over it a large room for
transacting the public business of the borough...' which was
by this time in a ruinous state. The last Assize Court was
held here in 1970. A plaque on the front of the Town Hall
records some of the building dates and information.
(Buildings of England: Pevsner N: North Somerset and Bristol:
London: 1958-: 325; Bailey S: Canonical Houses of Wells:
Gloucester: 1982-: 156).