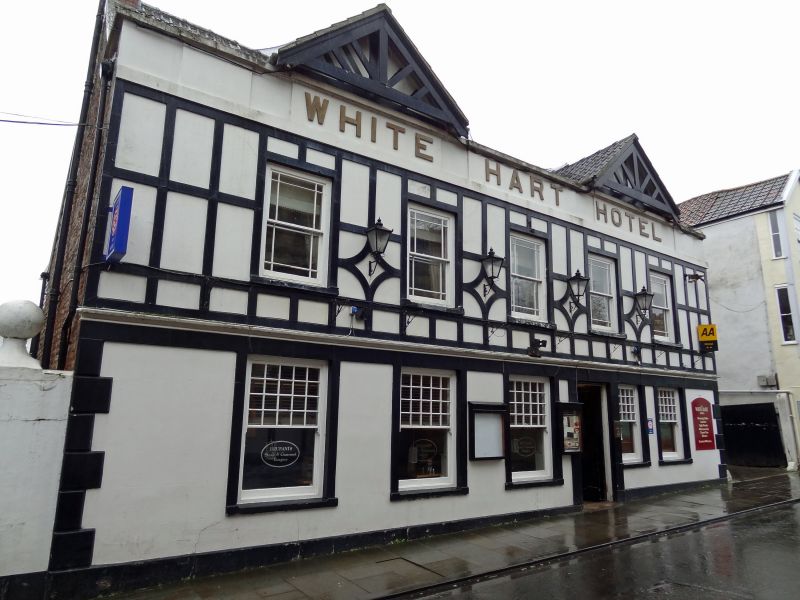 Hotel. Some C16 and C17 fabric, substantial alterations late
C19 and refronted early C20. Rubble, rendered front with
applied timber-framing, double Roman or pantile roofs.
PLAN: the wide parallel-plan front range has a transverse
gabled roof; attached, left rear is a deep wing, with gabled
roof facing the rear slope of the front range. There appears
to have been a long narrow early range, set gable to the
street, but reroofed at the front when 2 bays were added. The
early range may have been a 3-room plan with cross passage,
entered on the N side from a side passage or courtyard, the 2
rooms nearer the street being heated. At the rear right is a
gabled wing at first floor above a wide carriageway.
EXTERIOR: 2 storeys, 5 windows; at first floor plain sashes
with margin-pane surrounds, to stooled sills, and at ground
floor 3+2 sashes, the upper sash with 20 small panes, the
lower sash plain. Between bays 3 and 4 an early 4-panel door
in a plat-band surround. Small brick stack to the left gable.
There is a small plinth, dying to the right, a moulded string
above first floor, and a plat band below a blocking-course or
frieze with plain parapet carrying 2 false gables, with
timber-framing in 2 planes.
The return gable to the left is in plain rubble, stepped down
to a one-storey flat-roofed addition. Set back from this is
the long 2-storey wing, with various sashes, but also with a
4-pane sash at each floor to the left in C17 flush chamfered
stone surrounds, that to the ground floor with a central
mullion stub. At the street end is a brick stack to the gable.
Beyond is a further, lower wing.
The right return has a plain rubble gable with short
flat-roofed addition, and a single-storey flat roofed-unit
against the set-back wing, which has a 2-light casement, a
4-pane sash, and a very small slit light with flush chamfered
surround at first floor. Below is the C20 entrance, then to
its right a wide C20 door beneath a 5-pane transom-light.
Returned at the end of this wing is a wide gabled unit,
rendered, carried on three C17 chamfered and stopped beams.
The throughway is cobbled, and in the wall to its left is a
3-light stone casement with ovolo-mould mullions and surround.
INTERIOR: the street door gives to a stone-paved passage, with
what seems to be an original external wall to its left,
containing a former stone-framed casement, and the stone
entrance doorway with 4-centred head over a C17 door. To the
right of the passage is a shop. To the left are 2 rooms with
dividing fireplace set close to the passage, then the
staircase, with a further early room beyond. The middle room
has a 6-compartment ceiling with C16 moulded beams, and a
rebuilt fireplace, and opens to the front room, mainly
refitted in the C20, but with fireplace and interesting
cast-iron fireback with scrolled head and figures.
The staircase occupies part of the assumed transverse
cross-passage. The rear room is at a slightly lower floor
level, with low ceiling, cut into by a stair in one corner,
and in 6 compartments with deep chamfered beams; there is a
wide open fireplace to the external wall, with brick cheeks
but a large stone lintel to a very flat arch.
The staircase is a dog-leg, and at first floor detailing is
plain; the parlour, with coved ceiling, runs the full width of
the street front.
The wing at the rear has C19 king and queen-post trusses, and
the pantiles are underlined with lath and plaster.
SUBSIDIARY FEATURES: to the left of the front is a pair of
square rendered gate piers with capping swept to a ball
finial, but no gates.
HISTORICAL NOTE: there is a suggestion that this may have been
the Bishop's guest house. Later it became the Harts Head Inn.
The street frontage successfully conceals an interior of
considerable interest.