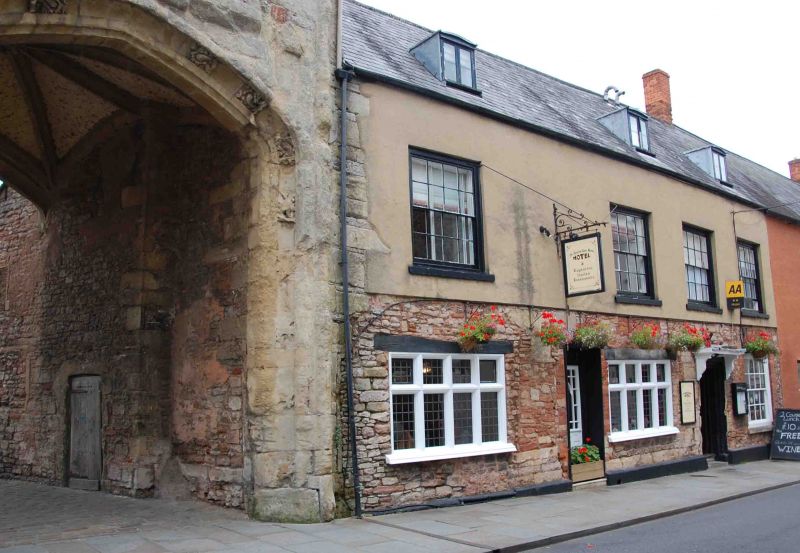 Hotel. 1451 with later amendments. Local random stone rubble
with Doulting stone dressings, rendered at first-floor level,
Welsh slate roof with abutment to north and continuation to
south, stone chimney stacks.
PLAN: the building incorporates Nos 20 and 22; No.20 has a
single room on each floor, much restructured in the early and
later C18, but retaining C15 fabric. No.22 has 2 main rooms at
each level in a former single-depth range, possibly with a
former cross-passage, and with spiral stair at the rear, right
end; this part is also linked with the mediaeval Brown's Gate
(qv), including one of its lettable rooms.
EXTERIOR: 2 storeys with attic, 4 bays. Plinth, ground-floor
bays 1 and 2 have 4-light ovolo-mould mullioned and transomd
windows under timber lintels, and bay 4 has a 16-pane sash
window with exposed sash boxes and timber lintel, there is a
half-glazed door between bays 1 and 2, and to bay 3 is a
6-panel door, recessed and up 2 steps, with moulded timber
hood on console brackets. First floor has 16-pane sash windows
to all bays, attic has dormers with 2-light segmental-arched
head casement windows to bays 1 and 4 and between bays 2 and
3.
North side elevation integral with Brown's Gatehouse (qv), and
features a break forward eastwards, with a timber doorway in
stone surround, a blocked 2-light window to left, with a
blocked single-light above.
Rear elevation to Cathedral Green in form of outshut, with
battlemented rear wall, with a part-glazed pair of doors and a
2-light casement window to ground floor, and above, cutting
into parapet string, a 2-light horizontal-sliding sash, at
mezzanine level to right an oculus. 2 late dormer windows in
roof with former chimney between. left of this, a section of
C18 and earlier, with three storeys, 2 bays, having sash
windows with thick glazing bars, 12-pane to ground and first
floors and 6-pane to second, C20 part-glazed door with timber
hood to lower bay 1.
INTERIOR: at the ground floor the right-hand room has been
much modified to provide a reception area, and a rear room has
a small stone square fireplace and a moulded cornice. To the
left of the entry, C20 panelling has replaced most wall
detailing, but there are 2 ceilings each in 4 compartments
with C16 moulded beams. The further room has a large fireplace
to the end wall, with a heavy and richly carved C15 overmantel
with brattishing and florets, above which is a small area of
C17 panelling. To the right of this is part of the buttress
stonework to Brown's Gate.
The rear wall has a stone chamfer-arch doorway to the left,
and a small C15 stone fireplace with 4-centred arch and
spandrels, but cut through centrally to a raised arch; to its
right the upper part of a further arched doorway, now as a
lunette, but perhaps the former rear door to the passage.
Above these rooms the former space has been sub-divided, with
a passage to the E side, with irregular stonework, and
including a fireplace, and the compartmental ceilings are
visible in sections. The windows have panelled shutters.
The entry to the passageway is through an arched chamfered
doorway. In the attic floor is one C17 door with moulded
planks, cut at the head to fit an irregular opening.
The roof over No.22 has a flat chamfered windbrace over the
front slope, with a very large chamfered and stopped purlin; a
central principal breaks through the purlin at the crown of
the arch brace, where a dormer has been formed. The rear slope
in this same room has one chamfered and stopped rafter
exposed. Over No.22 no wind-bracing remains, but one mortice
is visible in a rear principal; the main structure is heavy
cambered collar trusses and 2 large purlins, and one room has
a cruck-like foot to one of the principals.