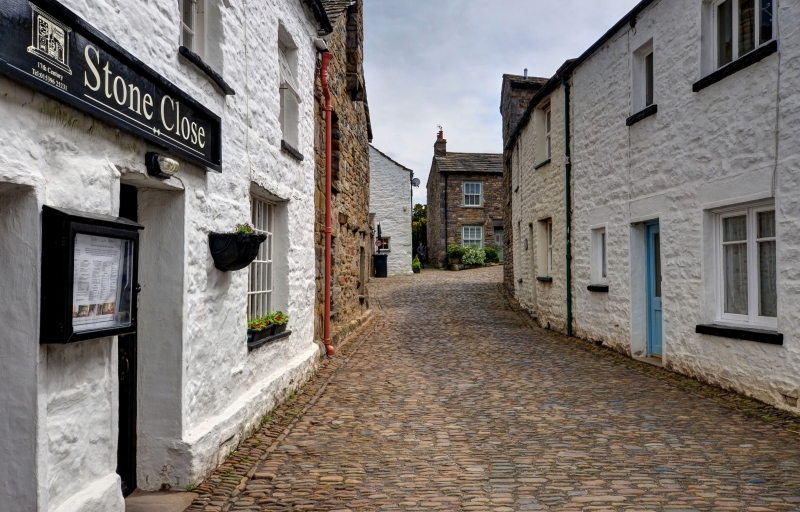 Pair of cottages, now cafe with dwelling over, with attached
barn. Probably late C17 and early to mid C18. White-washed
roughly coursed rubble with quoins; stone slate roof. Linear
plan on roughly east-west axis facing south, the left cottage
single-depth and 1 unit each plus a back extension, the
right-hand cottage double-depth; and the barn continued at the
west end of the left cottage.
EXTERIOR: the cottages are 2-storeyed (with 3-storey
proportions), 2 windows each, with a plinth. The doorways
almost adjoin in the centre of this range, both are
square-headed but that to the right is taller. The left
cottage has a rectangular window at ground floor with a C20
small-paned top-hung casement, and 2 square windows at
1st-floor level, both now top-hung casements imitating 6-pane
sashes. The right-hand cottage has a large square shop window
at ground floor, with glazing bars, and 2 rectangular windows
above, both now top-hung casements imitating 12-pane sashes.
Large square chimney on the ridge at junction with barn and
overlapping it (indicating that it is either corbelled or
extruded), with a stone slate band and a flat stone slate cap;
gable chimney at junction with Dolly's Cottage to right. The
barn continued at the same height to the left, 3 bays, has a
doorway at the junction, a segmental-headed wagon doorway in
the centre, with long rubble voussoirs, and some blocked
slit-breathers.
INTERIOR: the left cottage has a sunk floor, and a pair of
large chamfered lateral beams; the right-hand cottage has a
pair of smaller chamfered axial beams, a very large
rectangular C18 fireplace with a corbelled lintel and moulded
cornice, containing a mid C19 iron range with cranes (etc);
and, flanking the fireplace, complete suites of built-in C18
cupboards with fielded and shaped panels. At 1st floor the
left cottage has a lateral beam (boxed), the ceiling to the
east of it being noticeably lower than to the west: perhaps an
indication of a former partial attic loft.