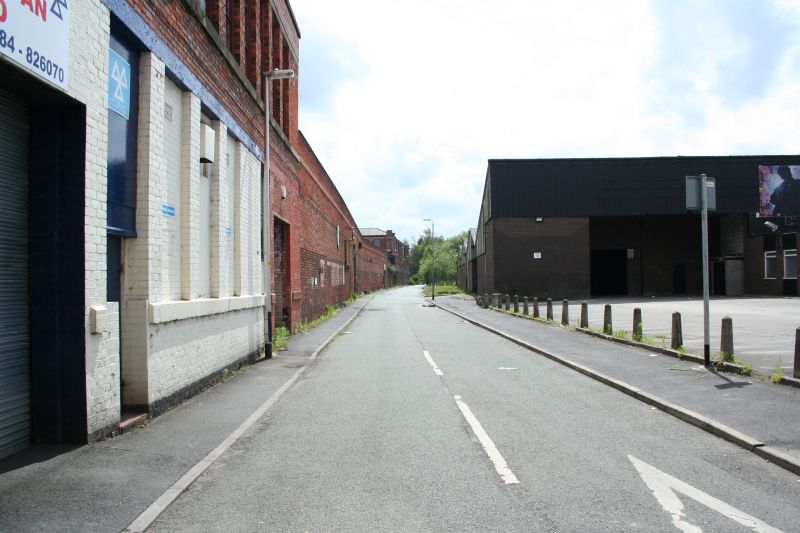 Integrated cotton mill, comprising spinning block with
integral engine house, and associated boiler houses, chimney,
reeling and winding rooms, weaving shed and warehouse; now
partly warehouses and workshops and partly unoccupied. Dated
1884 on parapet above entrance bay; by AH Stott for Farington
Eckersley & Co.Ltd; altered.
SPINNING BLOCK: red brick in English garden wall bond with
plinth of blue engineering brick, sandstone dressings (roof
concealed but probably asphalt). Large rectangular plan on
north-south axis with off-centre entrance bay containing
staircase with lateral engine house to rear and separating
long spinning rooms to south from short preparation rooms to
north. 4 storeys, 16:2:5 windows; with a strongly battered
plinth, panelled pilasters to the corners and the entrance bay
terminating in dentilled cornices; coped parapet, and
balustraded upstand over the entrance bay with a central panel
lettered "1884" topped by a segmental pediment. The entrance
bay has a pilastered doorway and shouldered side windows under
a stone entablature with central pediment, and pairs of
segmental-headed windows to the upper floors with stepped
jambs, stone sills and imposts, and those at top floor with
keystones. The main ranges to left and right are very
regularly fenestrated, with large segmental-headed windows on
all floors, those at ground floor and 3rd floor with
sillbands, all with arched brick heads and those at 3rd with
keystones; the 6th, 15th and 18th windows at ground floor have
been replaced by doorways, but the others have 6-pane joinery,
those at ground floor now with boarded lights and the others
mostly covered by translucent screens, and some damaged. The
south end has 3+3 windows separated by a prominent latrine
turret with paired lancet windows. The 7-window north end has
an added external lift to the centre and a turret to the rear
corner with similar lancets. The rear has fenestration like
the front, and a projecting full-height engine house with
panelled pilasters and a very large round-headed window with
pilaster jambs, moulded stone head with large keystone and
wooden 2-light joinery with circular tracery (damaged).
BOILER HOUSES AND CHIMNEYS detached to north, single-storey
under roof of 6 hipped spans (felted over slate), the eastern
portion built for former Old Mill; outer walls mostly rebuilt;
stump of chimney to rear of eastern portion; complete chimney
to rear of western portion, octagonal, tapering, with stone
oversail.
FORMER REELING ROOM contiguous with western boiler house,
single storey, with corner pilasters and stone doorway but
otherwise much altered; contiguous with this to the west, the
former "new" REELING AND WINDING ROOMS (now integrated with
weaving shed as car workshop), distinguished principally by
central clerestory roof.
FORMER WEAVING SHED parallel to rear of spinning block, and
linked to it in centre, with north-lights roof.
All these elements formerly a single functional entity. Forms
part of important group of cotton mills and associated
structures on this site, collectively a very striking feature
close to Wigan Pier.