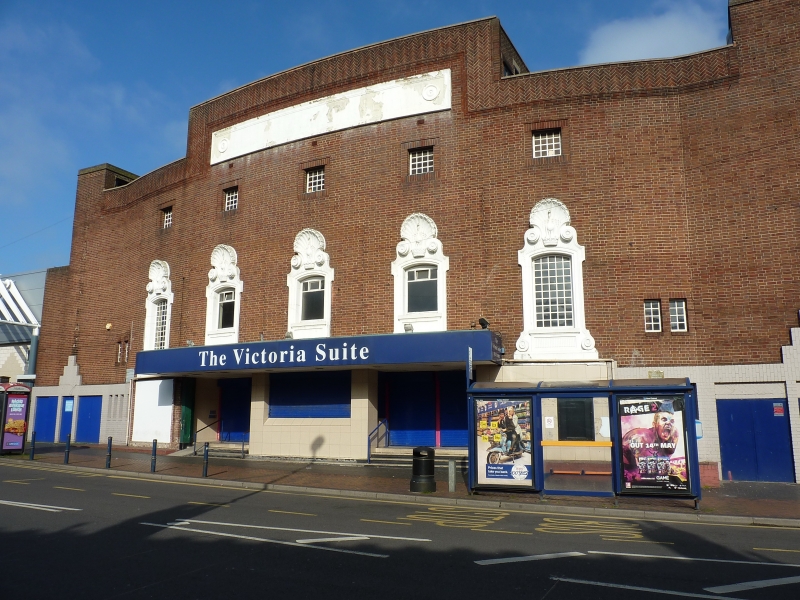 Location: Soho and Victoria, Sandwell, B66

EXTERIOR: Broad (120 feet) symmetrical three-storey frontage, breaking forward into a wide bay following the street line. The ends of the facade are terminated by lower wings and then short towers. Rising in the centre is an attic storey, carrying a broad panel which once displayed the name of the cinema. Border of chevron-laid bricks along the parapet of the central curving part of the facade, which also rises to run along the top of the attic storey. The entrances are up three steps, through two wide apertures in the centre, flanked by four narrow vertical windows on each side and a set of three exit doors, the middle of which is surmounted by a ziggurat of recently-painted vertically-laid brickwork. In the curving portion, there are five symmetrically positioned vertical windows at first-floor level, each embellished with elaborate Baroque surrounds (painted, but said to be of Portland stone) with swan-necked pediments surmounted by peacocks with spreading tails. The end two windows stand on low plinths with volutes flanking a reeded panel, and retain original small-pane glazing bars. At second floor level are small square windows set within indented brickwork surrounds. Roof not seen on facade. The first section of the return walls are of similar brick with scattered windows lighting inner foyers and lavatories. Rear part of the return walls are treated as roof mansards. Rear facade with gable end for auditorium roof, low stage fly tower and heating plant chimney.

INTERIOR: Wide but shallow lobby with flanking stairs ascending to an upper foyer. The ceiling over the stairs is plastered to imitate vaulting. Extremely wide double-height Art Deco auditorium. The side walls of the auditorium are lined by twelve tall, narrow pointed-topped triple-inset niches, which diminish in size in line with the rise of the balcony. At the foot of each niche is a fan-shaped motif. Proscenium with splayed ante-proscenium - the surface of the latter is ribbed and has a central feature (simplified in recent years) with canted sides. The embellished profile of the outer edge of the ante-proscenium was designed as a lighting cove (now disused). Coffered ceiling over ante-proscenium. The main ceiling is panelled with a fibrous plaster lighting feature in the centre designed as a series of circular formations. Shallow balcony with broad central vomitory which has panelled timber sides and two sets of double doors with border mouldings and lozenge-shaped glazing apertures. Five small windows, with blind glazing, on the rear wall. Two columns to support the former projection room over the rear balcony. The ceiling over the rear balcony has fibrous plaster honeycomb ventilation grilles.

ANALYSIS: This cinema opened as the Rink Cinema, replacing a cinema of 1912 on the site converted from an ice rink. It closed as the Gaumont in 1964, since when it has operated as a bingo club. It is a good example of a large super-cinema from the earliest years of `talkies', or sound films, and has many original features.