Chilcot School Including Number 4 at Rear 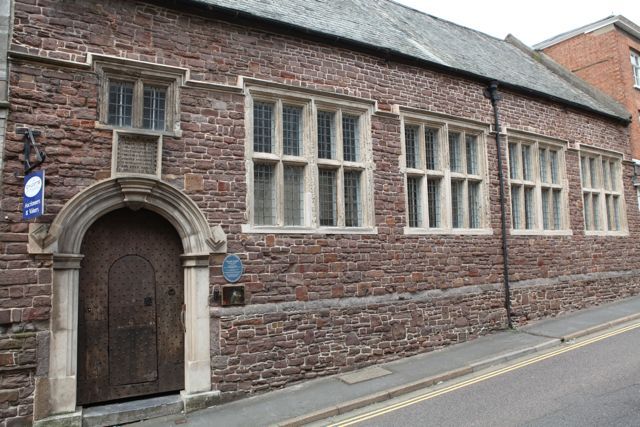 Includes: No.4 ST PETER STREET Tiverton.
Council meeting room and house, formerly school and
headmaster's house. Dated 1611; minor additions at rear.
MATERIALS: squared purplish stone rubble with most details in
dressed limestone, possibly from Beer; the front doorway
appears to be of a local volcanic stone, refaced with cement.
Storehouse rendered. Slated roofs with stone parapets on the
gable ends; storehouse roof of corrugated asbestos. C20 metal
ventilator on centre of ridge. House has stone chimney
(probably C19) at front end and red brick chimney at rear.
PLAN: school consists of an open hall along the street
frontage with a through-passage at the left-hand end; gallery
above the passage. Headmaster's house lies behind, at right to
the right-hand end. Opposite it, to the left of the courtyard,
is a 2-storey building (probably a C19 addition) with a
storehouse adjoining.
EXTERIOR: school single-storey. Front has 4 mullioned and
transomed windows of 4 lights each with king mullions;
ogee-moulded mullions, continued hoodmoulds. At left-hand end
is a round-arched doorway with moulded jambs, imposts and
archivolt; keystone projects, and appears originally to have
had a pendant. Hoodmould with lozenge terminals. Studded plank
door, much repaired with round-arched wicket-gate cut into it.
Above the door is a square moulded plaque with inscription:
Robert Comin als Chilcot borne in this towne founded this free
English Schoole and indowd it with maintenance for ever anno
dni. 1611. Above the plaque is a 2-light mullioned gallery
window with continued hoodmould. Projecting plinth with
chamfered coping of volcanic stone. Moulded corbel table under
the eaves.
Rear wall has 2 windows to left, matching those at the front.
Rear doorway to passage has Tudor arch with straight
hoodmould; masonry encased in cement. Rear extension, forming
in the ground storey a lobby to the rear courtyard, has a
plain segmental stone arch and a studded plank door.
Headmaster's house is 2-storey with a 3-window front facing
the courtyard. Centre doorway concealed by C19 or C20 gabled
porch. Ogee-moulded, stone-mullioned windows; those in ground
storey are of 4 lights with hoodmoulds and relieving arches,
those above are of 3 lights at either end and 2 lights in the
middle.
Rear gable wall (prominent in the view from Exe Bridge) has 2
stone-mullioned windows in each storey. Those in ground storey
have 3 lights to left and 2 to right; those in second storey
have 2 lights, the left light of the iron casements with small
oblong leaded panes.
INTERIOR: through-passage divided from schoolroom by a
stone-rubble wall containing a Tudor-arched limestone doorway
with ovolo and ogee mouldings, carved spandrels and large
pyramid-like stops; studded plank double doors with moulded
ribs. Schoolroom plain.
In rear wall to right a segmental-headed fireplace with
double-ogee moulding. barrel-vaulted ceiling with moulded ribs
having carved bosses at the intersections.
Gallery woodwork is probably entirely of 1907; a plaque
records that in that year the school was incorporated into a
gymnasium. Interior of house not inspected.
HISTORY: Robert Chilcot was the brother-in-law of George Slee
(qv The Great House of St George, St Peter's Street), another
Tiverton wool merchant and the nephew of Peter Blundell (qv
Old Blundells' School), a wool merchant with Tiverton links.
An outstanding example of a school of this period, Tiverton
also boasting Blundell's School (qv).