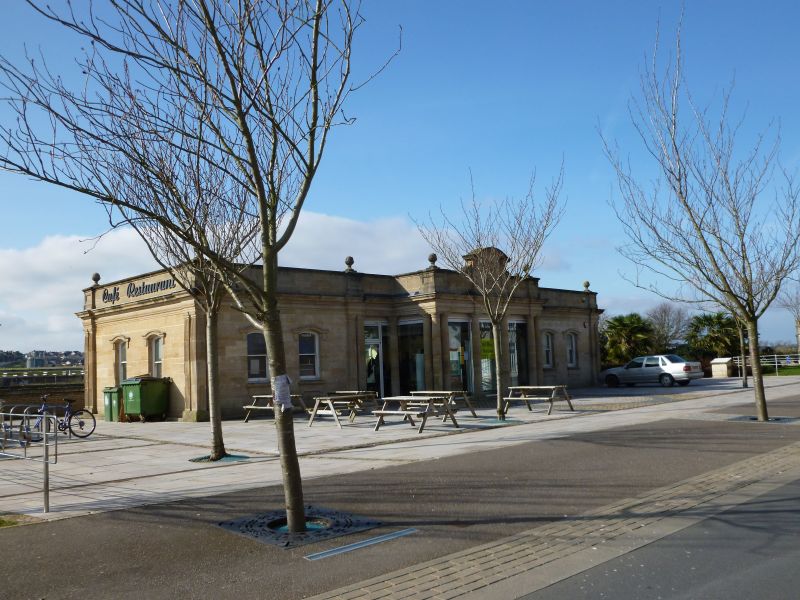 Bus station offices, waiting room and toilets. Dated 1922;
small late C20 addition to rear. Designed by ET Saunders,
borough surveyor, to match the adjoining Queen Anne's Walk
(qv). Front and side walls of limestone ashlar, rear wall
rendered. Flat roof; rear addition has slated lean-to roof.
Plan is 3 rooms wide and 2 rooms deep, centre front room being
used as waiting room with toilets behind.
One storey. Classical design with 3-bay portico flanked on
each side by a doorway and 2 windows. Portico has Tuscan
columns, coupled at either end, supporting an entablature with
pulvinated frieze. Tall parapet with pedestal at each end
carrying an urn; tall panel in centre with date 1922 and town
arms, the whole flanked by pilasters supporting an open curved
pediment.
Windows have segmental heads with moulded archivolts carried
on plain brackets; lugged aprons below the cills. Flanking
each of the 2 pairs of windows are coupled, fluted pilasters
supporting an entablature, parapet and urns like those over
the portico. Side elevations repeat this arrangement. Wall at
rear of portico, together with the doorways at either side,
have been replaced in late C20. To left of portico, next to
the right-hand pair of pilasters, is a tablet inscribed WALTER
LEWIS CROOT, MAYOR, 1922.
INTERIOR: partly inspected, seems to be entirely plain.
Included for group value.
(Lamplugh L: Barnstaple: 1983-: 144).