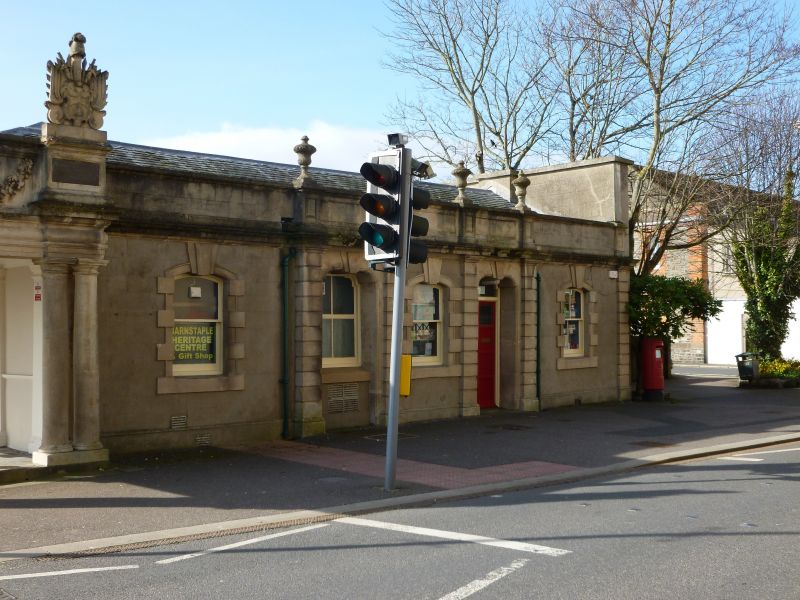 Former public baths, converted to Masonic Hall in 1868, now
club. Said to be 1859, the date of the public baths, but some
brickwork looks earlier. Attached to NW side of Queen Anne's
Walk (qv). Flemish bond brick construction, the SW elevation
originally rendered, the NE elevation (to The Strand),
designed to continue the scale of Queen Anne's Walk (qv),
cement-rendered and blocked out.
Roughly rectangular block consisting of 2 parallel halls,
roofed on a NW/SE axis divided by an entrance passage from
offices on the NE side. Main entrance from Queen Anne's Walk
into passage between halls and offices, entrance to offices in
NE side from The Strand.
Single-storey. Asymmetrical 5-bay NE elevation (to The Strand)
continues line of cornice and parapet of Queen Anne's Walk,
centre 3 bays are broken forward with chamfered, rusticated
pilasters. Windows with Gibbs surrounds and segmental heads
with triple keyblocks. Doorway in right-hand of centre bays,
C20 timber windows.
SW side, facing the river is 6 bays divided by pilasters with
round-headed recesses with keyblocks, the 2 outer bays
fenestrated with C20 timber windows. The exposed brickwork is
heavily repaired and the original, particularly on the NW
return, might be pre-Victorian. Two C20 timber windows onto
Queen Anne's Walk.
INTERIOR: 2 attractive late Victorian/Edwardian halls. The SW
hall has walls divided by giant engaged columns with a large
cornice and coved, ribbed ceiling. End bays have square wall
pillars with coffered ceiling and round-headed niche at NW end
and flat ceiling at SE end. NE hall has c1900 3-bay roof with
flat ceiling above collars of A-frame trusses which are held
on moulded corbels; Adam-style frieze above moulded picture
rail.