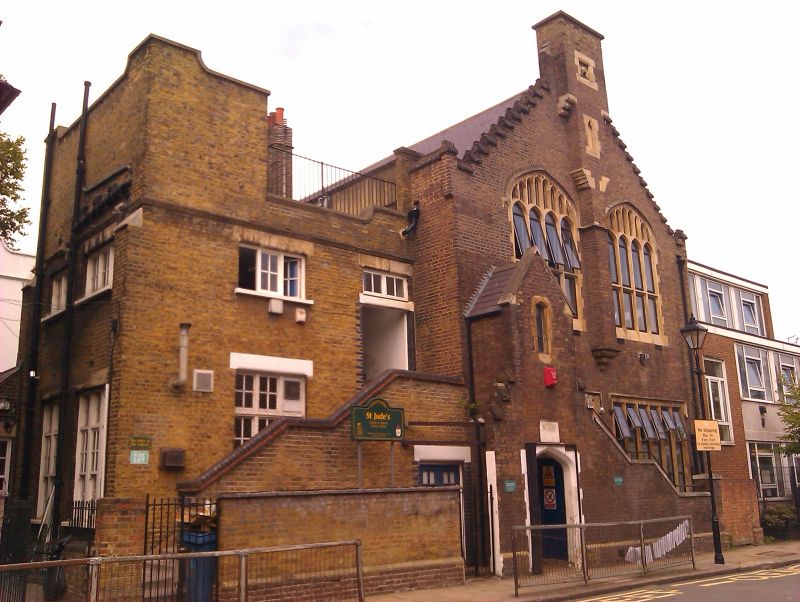 National schools. 1870-1874. Probably by a Mr Hall. The stone
dressings were renewed at about the time the Church of St
Jude, St George's Road (qv) was rebuilt, c1898.
MATERIALS: brick in Flemish bond with stone dressings; roof
covering concealed by parapet.
EXTERIOR: gable-facing elevation of 2 storeys and 2-window
range in Gothic Revival style. First-floor level entrance at
south corner reached up flight of stairs and set in a gabled
porch; second entrance below. Ground-floor windows are
mullioned with 4 and 6 lights respectively; Perpendicular
tracery to 4-light first-floor hall windows, which have
mullions and one transom each. Between these is a wall shaft
rising to a bell cote. The facing gable is crowstepped, and
forms a strong group with the pair of east-facing gables to St
Jude's Church in St George's Road (qv).
2-storey, flat-roofed addition to the south dates to 1902-3;
the Modern style addition to the north was opened in 1966.
Neither is of architectural interest.
INTERIOR: not inspected.
HISTORICAL NOTE: the first St Jude's School was a makeshift
structure built c1850 soon after the former Philanthropic
Society Chapel was sold to the Anglican Church. It was given
its present character in 1870-74, when the chapel, now St
Jude's Church (qv), was reoriented. The identity of the
original architect has not been recorded, but it is likely
that the work was completed by a Mr Hall, perhaps Henry Hall
architect to the Deptford School Board.