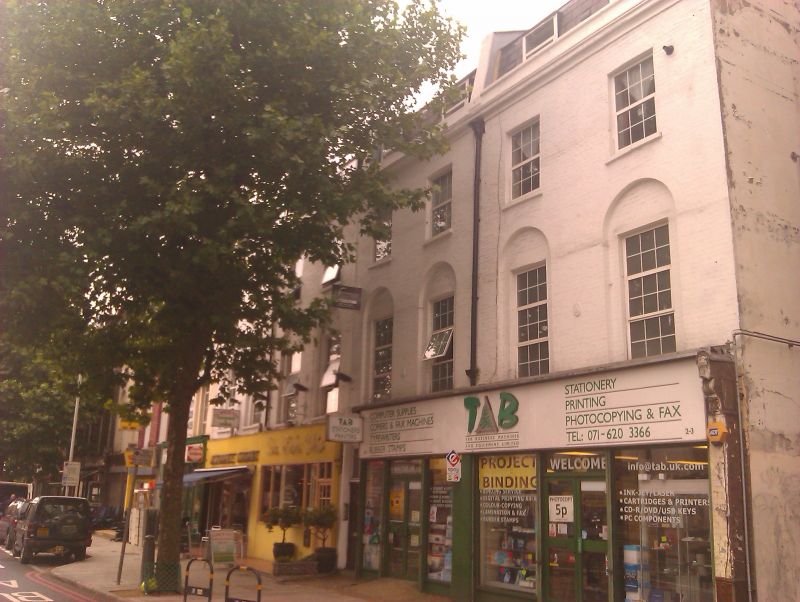 GV II
Terrace of thirteen houses, now with shops to ground floors. C 1817-19. Built to standard elevation pattern by William Mountague, Surveyor to the Corporation of London. Yellow gault brick (some fronts now rendered and painted), York stone window cills and coping to parapet, slate roofs. Three storeys over basements.
EXTERIOR: Each house comprises a two-bay front, originally with entrance doors to the left (that to No 6 in situ): ground floors now mainly with modern shop fronts, generally without interest; those to Nos 6 and 13 are probably Victorian survivals. The first floor consists of a continuous arcade, with tall window openings set within the recessed arches. The front of No 9 has been rebuilt. Nos 9-10 and 12-14 retain original 6/6-pane sashes to each floor, the rest are modern replacements. Nos 2-4 retain a moulded cornice at parapet height. Each house has an early mansard storey with a central window.
INTERIORS: only partially inspected, and evidently much altered. The comparable houses across the street retain stairs with columnar newel posts and stick balusters, panelled partitions to the stairwells, and some marble chimneypieces with roundels to the corners: such features, commonly found in late Georgian London houses, were probably repeated in these houses.
ADDITIONAL FEATURES: Lead plaques showing the ownership of the properties by the Bridge House Estate of the City Corporation remain in situ on nos 1-4, 8, 10-14.
HISTORY: these houses stand on part of the City's Bridge House Estate. The opening of Blackfriars Bridge in 1760 encouraged the development of this area, and Robert Mylne's scheme for St George's Fields was commenced in 1770, with the obelisk marking this new approach to the City being erected in 1771. This area required draining before development could get underway, however, and not until 1807 did George Dance prepare a scheme for the building of terraces around this new civic space along what is now London Road. An Act enabling development to start was finally passed in 1810. The arcaded fronts are of a kind stipulated by the City Corporation: William Mountague was the City Surveyor at the time of their building. These houses form part of this notable piece of Late Georgian town planning, and have strong group value with the obelisk in St George's Circus and the matching terrace across the road, which is dated by deeds to 1817-1819. This row is shown as already built on Horwood's map of 1819.