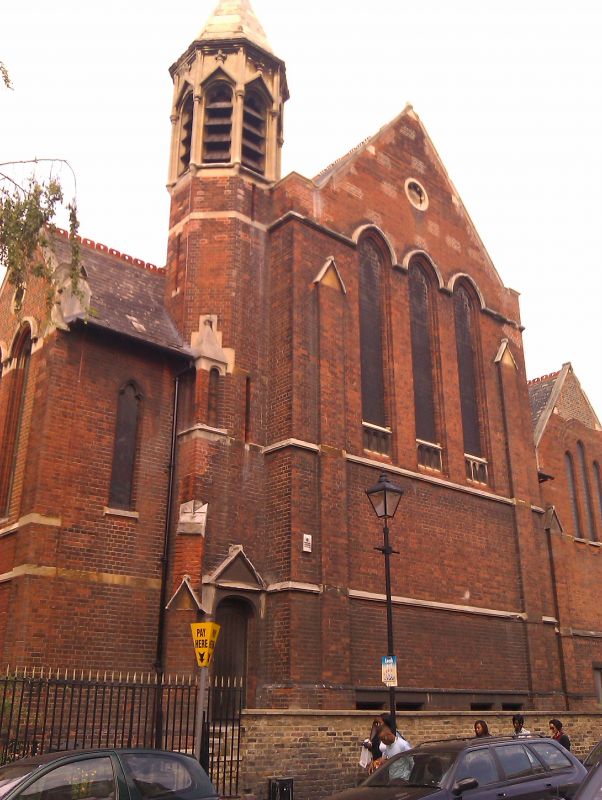 PLAN: nave and square-ended chancel of four bays with north and south aisles; vestries/organ chamber to north and south, the former with an east-facing gable and the latter treated as a transept, its gable end facing south; polygonal bell turret rising to stone-capped roof filling angle between this transept and chancel flank. Entrance at ritual west end of south aisle; glazed undercroft to aisle.

EXTERIOR: the earlier structure survives at the west end of the north aisle, and was retained as a temporary measure until the church's west end could be completed; these remains consist of four pointed windows, two over two; only one of these early C19 windows is currently in use (looking at the wall from the west this is located in the upper right corner). This structure is unrelated in scale or materials to the later Victorian church; immediately east is an unusual roof truss that belongs to another phase of construction.

INTERIOR: not inspected at time of resurvey, however photographs held by the RCHME taken in the late 1980s show interior surfaces of unpainted brick and a flush panelled ceiling carried on arched principals tied with metal bars. Aisle roofs on strutted principal rafters. Panelled reredos with painted frieze above; raised chancel with pulpit to ritual northeast; organ to north of chancel.

FITTINGS: at the time of the Royal Commission's visit, the church liturgical fittings were largely intact. The east gables of the chancel and vestry/organ chamber form a strong group with the facing gable elevation of the former National Schools to the north in Colnbrook Road (qv).

HISTORICAL NOTE: The Philanthropic Society was dedicated to training and reforming young offenders. It occupied the site from 1791 to 1849, when it left Southwark for Redhill. The chapel of 1803-1806, which was not cardinally oriented, was given over to Anglican use and a scheme for enlarging and improving initiated but then immediately abandoned for lack of funds. In 1871 a scheme for reorienting the church, extending it and providing a proper chancel was carried out. The commission awarded by limited competition judged by Aston Webb; construction was delayed by lack of funds. Leverton's building swept away virtually all of the earlier structures; the c1871 school survived.