Subway, Vestibule, Terrace and Stairs to the Crystal Palace 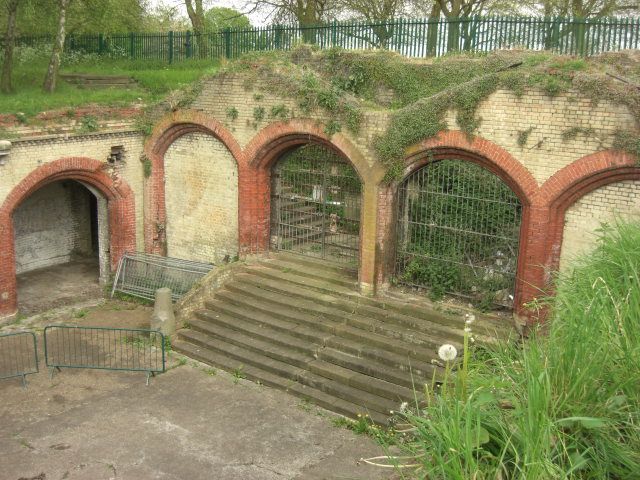 MATERIALS: the main structure is a built from red and cream brick, and has paved floors in alternating stone, and stone steps.

PLAN: the subway was built to link the Crystal Palace High Level railway station (now demolished), which stood in a cutting on the north-west side of Crystal Palace Parade, with the Palace to the south-east.

From a terrace on the north-west side, railway passengers would enter the vaulted subway crossing beneath Crystal Palace Parade, and emerge in a glass-roofed vestibule (roof no longer extant) to the south-east, which communicated with four staircases, two ascending for entry to the central transept of the palace, and two for departure. A stair from the north-west terrace enabled access to Crystal Palace Parade, above.

EXTERIOR: the north-west is the only external elevation of the subway, which is otherwise subterranean. It is built in cream brick with a parapet to the road above, and has four wide segmental-arched openings, lined in red brick. The terrace is paved in stone slabs laid in a diamond pattern, with star formations at either side. There has been repair and replacement in concrete.

INTERIOR: the subway has three parallel rows of five octagonal columns, with half-octagonal responds against oblong piers at either end and along the walls; all are cream brick with moulded stone capitals and ovolo stone mouldings to the brick bases. Circular fan faults rise from each in red and cream brick laid to form diamonds. Ovolo-moulded stone defines each vault, between which are circular roundels with polychromatic diapering, and a central cast-iron gas light fitting. The side walls are cream brick between the piers, with a border of red brick. At the northern corner there is an L-shaped porcelain channel in the floor, a remnant from the use of the subway as an air raid shelter.

The vestibule has retaining walls to either side, with stairs ascending to ground level at the south-east end. The side walls have three segmental arches lined in red brick, the northernmost two of which are blind, and the southernmost opening into tunnels lined in buff brick, with stairs ascending to ground level. The south-east side of the vestibule mirrors the entrance to the subway with its four arches: the outer two are blind, and the central two open, reached by a short flight of steps which then have a quarter turn from which staircases rise to ground level. A wall separates the two flights, which would have served for entrance and departure, and the retaining walls are cream brick. At the top of the north-west and south-east walls traces of the two shallow pitches of the roof remain.

The original 'Crystal Palace' was built to house the Great Exhibition of the Works of Industry of All Nations, a vast international showcase of the applied arts that took place in Hyde Park between May and October 1851. The exhibition was conceived by its sponsor, the Society of Arts, Manufactures and Commerce, as a means of educating the British workforce and improving what were felt to be the country's poor standards of industrial design. After the exhibition closed, Joseph Paxton's enormous iron, glass and timber structure was dismantled, and its prefabricated components used to construct a second, even larger exhibition building set amid grand landscaped pleasure grounds, also designed by Paxton (1803-1865) and his protégé Edward Milner, on the slopes of Sydenham Hill – at that time well beyond the outer fringe of London. The new Palace, which opened in 1854, was based on a revised design by Paxton with input from the architects Matthew Digby Wyatt and Owen Jones, and developed by a private consortium known as the Crystal Palace Company. It hosted a sequence of permanent displays illustrating themes from natural history and the development of civilisation, as well as a theatre and concert hall, several large commercial showrooms and an immense shopping bazaar. A broad new avenue, Crystal Palace Parade, gave access to the Palace via three entrances aligned with the building's three 'transepts'.

For its first three decades the park drew an average of 2 million visitors per year – and railway companies sought to capitalise on this potential. The park was initially served by a railway station on its south-west boundary (the extant Crystal Palace Station), and a second station, initially known as Crystal Palace and Upper Norwood, and latterly as the High Level Station, was built at the south-western corner, in a cutting adjacent to Crystal Palace Parade. As explained in the Conservation Management Plan, the undependable nature of reporting in the C19 resulted in the designer of the new railway terminus being misreported a number of times, however, it is believed to have been designed by Charles Barry Jr, son of the eminent architect Sir Charles Barry, although his brother Edward has not entirely been discounted. ‘The Engineer’, on 18 August 1865 reports Charles as the architect, as does the Morning Post, on Christmas Day, and a correction published in the ‘Illustrated London News’ confirms that it was Charles, rather than Edward, who designed the station and subway (7 October 1865). The contractor for the station was Messrs Lucas. The Governors of Dulwich College, for whom Charles Jr was the Estate Surveyor, having succeeded his father in 1858, stipulated conditions for the design and materials of the station, raising costs to a final figure of £100,000.

Construction of the new station had begun by 1863, and it was opened on the occasion of the Oddfellows Fete on 1 August 1865; the subway was not opened until December. The ‘Railway News’ noted that the ‘beautifully arched subway leading from the station into the central transept will alone repay a visit’ (30 December 1865). The station was initially segregated by the class of passenger, and had a concourse at the northern end leading first-class passengers to the vaulted subway, where they would emerge at the central transept of the Crystal Palace; lower class passengers were filtered to the south transept. The subway is a striking Byzantine-style construction, with dramatic fan vaults in red and cream brickwork, said to have been built by Italian cathedral bricklayers, and intended as an exciting prelude to the Palace itself. The materials mirrored those used in the station, a grand edifice with turrets, heavy rustication and arcading, built in a French Renaissance-style.

Charles Barry (1823-1900) was the eldest son of the renowned architect of the Houses of Parliament, who, incidentally, spent his final afternoon at the Crystal Palace when he died on 12 May 1860. Having served his articles at his father’s offices, Charles Jr began his own practice in 1847 with Robert Richardson Banks, a principal assistant to his father. He became a fellow of the RIBA in 1854, served as President from 1876 to 1879, and was awarded the gold medal in 1877. In 1858 Barry succeeded his father as surveyor the Dulwich College Estate, within which some of his finest buildings stand; the new college building, commissioned shortly after the subway, is listed at Grade II* (NHLE 1385418).

In spite of the initial popularity of the Palace and the park, the Crystal Palace Company twice went bankrupt (1887 and 1901). Visitor numbers fell as the C19 drew on, though were bolstered by various sporting events being held, and facilities established in the park; it began hosting the FA Cup Final in 1895. The High Level Station never received the great number of passengers anticipated, though investment on the line continued. The station was temporarily closed during the First World War, and despite low passenger numbers, the line was electrified in 1925.

The Crystal Palace was destroyed in 1936 by what was the biggest peace-time fire of C20 London. The demand for train services following the disaster further diminished, and the station closed during the Second World War. The subway was adapted for use as an air raid shelter, and the glass roof of the vestibule, suffered damage from anti-aircraft fire. The station was repaired and re-opened after the war, though was little-used and closed in 1956, before being demolished in 1961, following which its plot was redeveloped for housing. In 1952 the park and Palace lands were transferred to the London County Council (LCC) and the lowest part of the site was reopened as a public park. Continuing the sporting tradition that had begun as the popularity of the Palace waned in the later C19, it became the home of the National Recreation Centre, opened in 1964, listed Grade II*.

The subway remains extant, though the roof to the vestibule, which was damaged during in the War, no longer survives.

The subway, vestibule, terrace and stairs of 1865, providing entrance to the Crystal Palace, are listed at Grade II*, for the following principal reasons:

* an elaborate pedestrian subway, with finely-crafted Byzantine-style vaulting in high-quality materials, which survives well;
* an architecturally imaginative and elegant solution to the problem of transporting visitors beneath the road, and providing a dramatic prelude to the Crystal Palace;
* one of the few surviving structures related to Crystal Palace and its re-erection on Sydenham Hill.

* the Great Exhibition was one of the most important technological, artistic and cultural events of the C19, and Paxton’s Crystal Palace was at its heart; its re-erection at Sydenham Hill, on a larger and more extravagant scale in its own landscaped grounds represents the apogee of Victorian ambition;
* designed by Charles Barry Junior, a highly-accomplished architect, and illustrating his architectural imagination and ingenuity.

* with the Grade II* registered landscape and other surviving structures of the mid-C19 Crystal Palace scheme, and important C20 listed buildings, illustrating the sustained prominence of the park for public leisure.