Base of the southern water tower to the Crystal Palace including attached low walls, brick-lined trenches and pipework 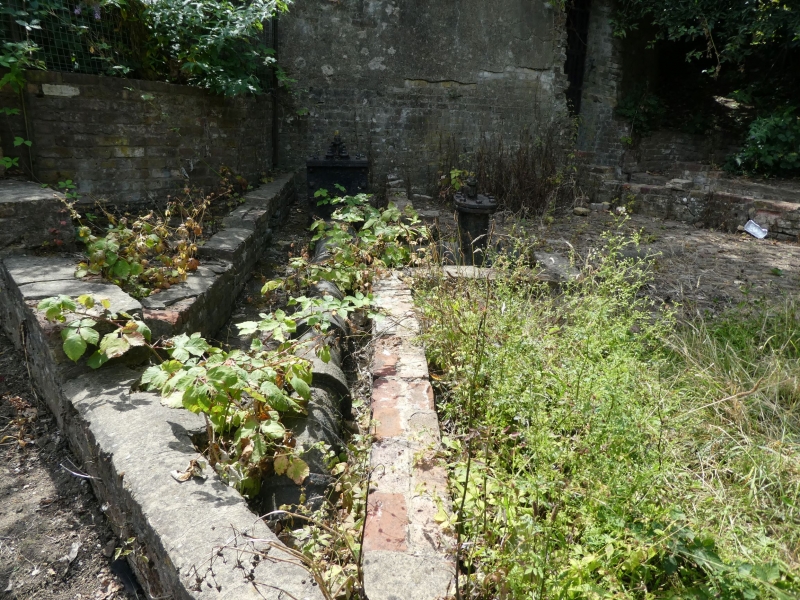 Entry Name: Base of the southern water tower to the Crystal Palace including attached low walls, brick-lined trenches and pipework

Base and foundations of the southern Crystal Palace water tower. Built for the Crystal Palace Company by Fox, Henderson and Company to designs by Isambard Kingdom Brunel between 1854 and 1856. The tower itself was demolished in 1940-1941.

Base and foundations of the southern Crystal Palace water tower. Built for the Crystal Palace Company by Fox, Henderson and Company to designs by Isambard Kingdom Brunel between 1854 and 1856. The tower itself was demolished in 1940-41.

DESCRIPTION: the structure comprises a thick, tapering, ring of brickwork, around 5.5m in height and laid in English bond, beneath which is subterranean area enclosed within the circular mass concrete foundation with a depth of around 3m. The brickwork has a coating of cement render which has fallen off in places. On the north side of the structure is an arched opening with a cast-iron gate. To the east of the entrance is a small brick arch at ground level. From this protrudes a large diameter cast-iron water pipe, laid in a brick-lined trench, which branches to the north-east and north-west with a large rectangular valve to each branch. To the north and east of the tower base are a number of attached low walls and a brick pavement.

Within the tower base a vaulted brick passageway gives access to a 5m high square brick structure which formed the base of the brick chimney which occupied the centre of the tower.

The original 'Crystal Palace' was built to house the Great Exhibition of the Works of Industry of All Nations, a vast international showcase of the applied arts that took place in Hyde Park between May and October 1851. The exhibition was conceived by its sponsor, the Society of Arts, Manufactures and Commerce, as a means of educating the British workforce and improving what were felt to be the country's poor standards of industrial design. After the exhibition closed, Joseph Paxton's enormous iron, glass and timber structure was dismantled, and its prefabricated components used to construct a second, even larger exhibition building set amid grand landscaped pleasure grounds, also designed by Paxton (1803-1865) and his protégé Edward Milner, on the slopes of Sydenham Hill – at that time well beyond the outer fringe of London. The new Palace, which opened in 1854, was based on a revised design by Paxton with input from the architects Matthew Digby Wyatt and Owen Jones, and developed by a private consortium known as the Crystal Palace Company. It hosted a sequence of permanent displays illustrating themes from natural history and the development of civilisation, as well as a theatre and concert hall, several large commercial showrooms and an immense shopping bazaar.

Plans for the park and gardens of the Palace included a water display comprising almost 12,000 individual jets with a great circular fountain which occupied the central position below the Terraces, the main jet attaining a height of around 45m. Paxton planned two water towers to provide the necessary water pressure. They were also to incorporate the chimney flues for the boilers which heated the Palace. The designs were produced by his assistant, Charles Heard Wild, but Paxton turned to Isambard Kingdom Brunel for advice after reservations about the viability of the designs. Brunel raised a number of engineering issues and eventually the directors of the company decided that Brunel should replace Wild as the engineer responsible for the towers. Paxton meanwhile decided to increase the capacity of the tanks from the original 500 tons to 1500 tons. As a result Wild’s slender towers, which had begun to be built, were demolished.

Brunel’s re-designed towers were begun in August 1854, after the Palace had been formally opened. The foundations consisted of a Portland cement concrete ring 1m thick and 3m wide with an outside diameter of 18m. On this was built a drum of tapering brickwork to a height of 5.5m on which stood 12 cast-iron foundation plates from which rose the cast-iron columns and bracing with a cladding of cast-iron panels. The tower had ten storeys, reached by cast-iron spiral stairs winding around the central chimney, each with metal-framed, multi-paned, arched windows set around the circumference. The columns supported the water tank itself and the brick chimney passed through the centre of the tank to an ornamental cast-iron cap surmounting the glazed conical roof over the tanks. The two towers were 86m tall and of identical design. Construction was undertaken by Fox, Henderson and Company, who had been the main contractors for the Great Exhibition building and its relocation to Sydenham. The towers became operational on 2 June 1856 and on 18 June the fountains were turned on in the presence of Queen Victoria.

Following the opening of the Crystal Palace School of Practical Engineering in 1872, the first three floors of the South Tower were fitted out as a lecture room, drawing office and workshops. They retained this function when the main college building (the surviving part houses the Crystal Palace Museum) was built around 1880, until the school relocated in 1916.

Although the water towers generally functioned efficiently, the Winter Garden and Leisure Park were less successful (the Crystal Palace Company twice went bankrupt in 1887 and 1909) and many of the fountains fell out of use long before the fire of 30 November 1936 which destroyed the Crystal Palace. The towers survived the fire and, prior to this, John Logie Baird had used the South Tower from 1933 for an antenna mast for his experimental television transmitting station. During the Second World War, reputedly after concerns that the towers offered a distinctive landmark to German aircraft, it was decided to demolish them. The North Tower was demolished with explosives on 16 April 1941 but, due to the proximity of housing and the former engineering school buildings, the South Tower had been previously dismantled in sections during the autumn of 1940.

The base of the south tower was excavated in 1985.

The base of the southern Crystal Palace water tower, built by IK Brunel between 1854 and 1856, is listed at Grade II for the following principal reasons:

* as one of the few surviving structures related to the relocated Crystal Palace, a project representing the apogee of Victorian cultural and engineering ambition;
* for the tangible evidence it provides for the design and construction techniques used by Brunel in the pair of water towers, a once iconic presence in the landscape;
* for the early use of Portland cement concrete for the foundations.

* as one of the last major commissions by IK Brunel, the foremost engineer of the Victorian Age;
* as a reminder of John Logie Baird’s pioneering television transmissions in the 1930s.

* with the other listed structures in the vicinity relating to the Crystal Palace including the nearby re-erected cast-iron column.