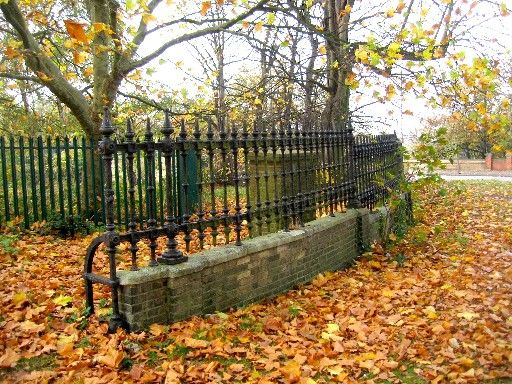 DESCRIPTION: Two sets of railings survive on the eastern side of Crystal Palace Parade, on either side of the former location of the Palace's central transept. The railings themselves have thick tubular uprights with multiple torus mouldings and blunt spear-like finials, threaded onto square-sectioned top and bottom rails with heavy bosses at the intersections. Beneath are low stone-capped plinth walls of stock brick, with projecting pilasters about every three metres supporting taller and thicker iron uprights. The southern railings comprise a curving run of nine and a half bays, supported by a curved brace at their inner (northern) end and gradually stepping downward towards their outer end where they are attached to the square brick end pier of the subway parapet. The northern railings describe an answering curve before running straight for eight bays, terminating in another square pier. The railings in the northernmost three bays have partly collapsed, and of the innermost two bays of the curved section only the plinth wall remains.

A cast-iron BOUNDARY POST, marked 'Camberwell Parish 1870', stands against one of the pilasters.

HISTORY: The original 'Crystal Palace' was built to house the Great Exhibition of the Works of Industry of All Nations, a vast international showcase of the applied arts that took place in Hyde Park between May and October 1851. The exhibition was conceived by its sponsor, the Society of Arts, Manufactures and Commerce, as a means of educating the British workforce and improving what were felt to be the country's feeble standards of industrial design. After the Exhibition closed, Joseph Paxton's enormous iron, glass and timber structure was dismantled, and its prefabricated components used to construct a second, even larger exhibition building set amid landscaped pleasure grounds on the slopes of Sydenham Hill - at that time well beyond the outer fringe of London. The new Palace, which opened in 1854, was based on a revised design by Paxton with input from the architects Matthew Digby Wyatt and Owen Jones, and developed by a private consortium known as the Crystal Palace Company; it hosted a sequence of permanent displays illustrating themes from natural history and the development of civilisation, as well as a theatre and concert hall, several large commercial showrooms and an immense shopping bazaar. A broad new avenue, Crystal Palace Parade, gave access to the Palace via three entrances aligned with the building's three 'transepts'; the surviving railings marked the middle entrance via the taller central transept. In 1864 the Crystal Palace High Level railway station was built alongside the Parade, with access directly into the site by means of a pedestrian subway beneath the road, the whole station ensemble being designed by E M Barry.

Despite fluctuating commercial fortunes and a major fire in 1866, the second Palace continued in operation for eighty-two years, before a second, even greater fire in 1936 resulted in its near-total destruction. The cleared site was put to a variety of uses: during WWII it served as a dumping-ground for rubble from London bomb-sites, and since the 1950s its northern section has accommodated a caravan park, a BBC television transmitter and a covered reservoir. The High Level Station was demolished (apart from the subway) in 1961, and its site later developed for housing, while the wider park was transformed by the construction in 1960-64 of the National Recreation Centre (parts of which are Grade II* listed).

REASONS FOR DESIGNATION: The north and south spear railings and parish marker are listed at Grade II for the following principal reason:
* Design: a handsome example of mid-Victorian cast ironwork, displaying the bold and sturdy forms typical of the period
* Historical: they mark what was once the main entrance to the Crystal Palace, Victorian London's greatest permanent public spectacle and one of the most important buildings of the C19.
* Boundary post: a well-preserved and clearly legible example of its type, which has group value with the adjoining railings.