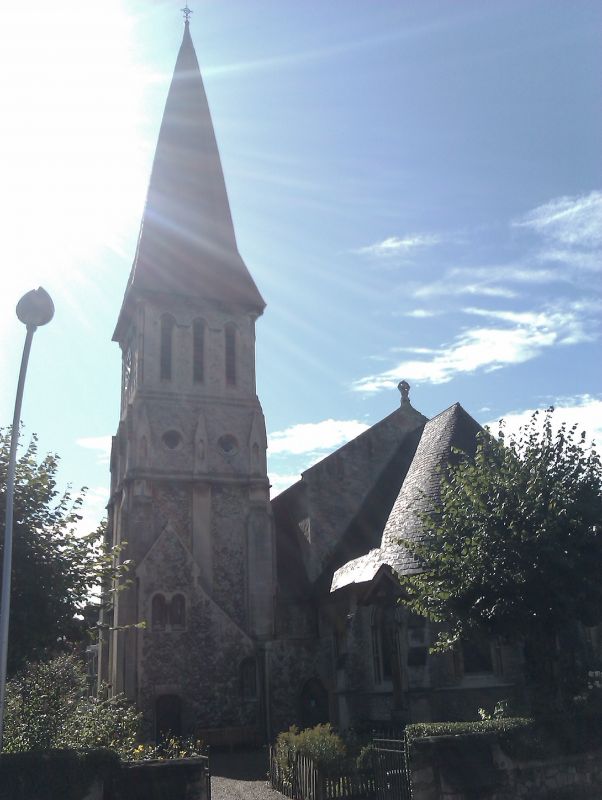 Anglican church. 1863-65. By Charles Bailey; vestries added in
1883 by A Burt, and a choir vestry in 1914 by HS Rogers.
Reconstructed internally in 1951 by JBS Comper after bomb
damage.
MATERIALS: Kentish ragstone with roofs of tile. Comper's work,
which is included for its intrinsic interest, complementing
the furnishings and original architecture, of reinforced
concrete, roof of metal.
PLAN: rounded apse with choir of one bay; vestries to north
and south; chapel of 2 bays off north nave aisle; nave of 5
bays with west gallery; south aisle; nearly freestanding
tower, 3 stages with broached spire, to south elevation, on
join between nave and chancel. Revival of Early Gothic lancet
style; Comper reproduced this style in the clerestory, but
inside his vaulting has an almost Italian medieval feeling.
EXTERIOR: east lancets to apse are sub-ordered with jamb
shafts, divided by buttresses and 2 set backs to corbel table;
plinth at sill level. Parish rooms in similar materials to
north-east; single storey with gableted roof.
To the south of the apse is a 2-storey, gable-facing stair
tower. Tower of 3 stages with clasping corner and central
buttresses to each face; ground-level round-arched lights,
with a pair of trilobed lancets above; stage below bell stage
with quatrefoil roundels and gableted niches; bell stage with
3 lancets; corbel table to spire eaves. Coupled trilobed
lancets to each bay of nave and clerestory; timber-framed
porch to south aisle, 2nd bay from west. Gable crosses to east
and west gables.
West elevation most unusual design: single pointed and
sub-ordered entrance, flanked by strip buttresses terminating
in gabled niches; 3 lancets to level above, lighting west
gallery; just above centre lancet a 8-light wheel window.
Corners of nave marked by broad setback buttresses terminating
in pepper pot finials; west end of aisles with kneelers to
lean-to roof.
INTERIOR: chancel raised by 3 steps above nave; camber-arched
king strut with 4 arches turning the round of the apse, each
springing from wall shaft. Nave arcade responds abut wall
pierced by chancel arch which is simply chamfered and rebated
supported on corbelled shafts. Broadly proportioned nave with

quadripartite groin vaults; arcade rebated, sitting on
cylindrical piers; shallow north and south aisles.
FITTINGS include: Tudor-style painted screen and rood loft to
north wall of chancel; baldacchino on clustered shafts, with
trilobed arches, the spandrels painted with angels; at west
end of chancel a Renaissance-styled altar; west gallery
supported on 7-bay arcade in an English Renaissance style;
north, or lady chapel with painted decoration to vault ribs;
the latter has a polychromed statue of the Virgin and Child;
organ in tower arch at east end of south aisle; octagonal font
at west end; stone paving to nave consistent with the rest of
Comper's alterations. Most glass clear, except for one aisle
window dated 1914 and in the manner of Kempe. Brass
chandeliers, 5 to each side, in an C18 style.
HISTORICAL NOTE: although the rebuilding of war damage was
quite extensive, Comper's vault increases the interest and
value of the design especially when it is considered together
with the extraordinary range of high quality C20 furnishings,