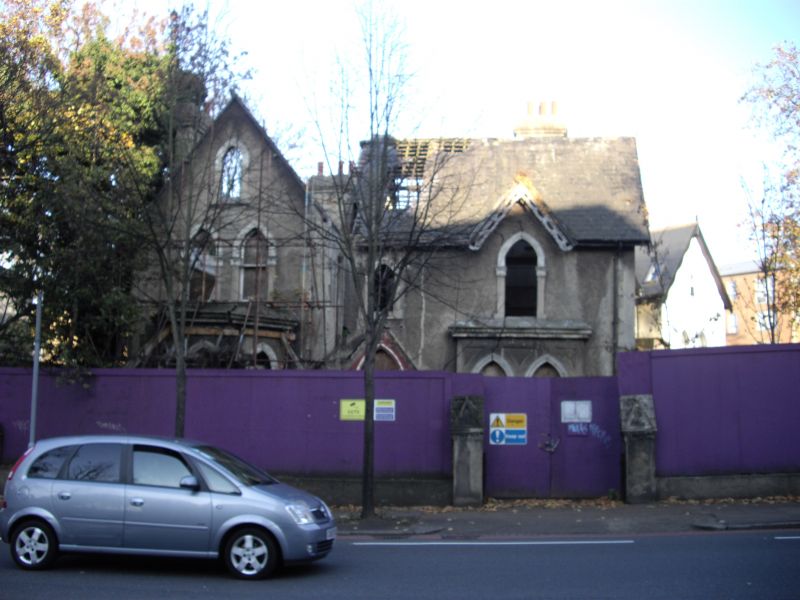 MATERIALS: Massed shuttered concrete of Portland cement with an aggregate of 'burnt ballast', a type of burnt clay, giving the material a porous honeycombed texture. The concrete was therefore faced with a layer of a mortar-like composition called 'compo' to make it weatherproof and render was used to provide artificial stone detailing to quoins and window details. Slate roof.

EXTERIOR: The house is designed in a Gothic style, of two storeys plus attic with steeply pitched slate-covered gabled roofs with walls of massed shuttered concrete. The two principal (south-west and south-east) elevations both have projecting gables to the left, with ground floor canted bays with pointed arched Gothic windows with foliate capitals (the windows to the bay on the south-east elevation have been lost since 2001) and two similar arched windows on the first floor with a final one in the attic-storey, below traceried barge-boards. The south-west elevation originally had a gabled porch in the return angle but this has been lost apart from its concrete base, as has the original panelled door. To the right of the porch is a shallow bay on the ground floor with double-arched windows and concrete canopy. Above this is a single arched window beneath a gablet with bargeboards. This arrangement is repeated on the south-east elevation except that the two ground floor arched windows (lost since 2001) do not have the projecting bay. The north-west and north-east elevations, in contrast to the two principal elevations, have square-headed windows with imitation-stone stucco dressings except for an arched window below the gable of the north-east elevation. The house has three large concrete chimneys, two positioned in the outer walls on the north-west and north-east sides and a third projecting through the roof to the right of the south-east gable. Part of the steeply pitched slate roof has been lost altogether and in other parts only the rafters and battens remain.

INTERIOR: Since originally listed in 1994, the interior has suffered much loss. In 2009 it no longer retained its elaborate cornices and ceiling roses which were clearly part of the building's special interest. The plan form of the ground floor remains legible as the interior concrete walls remain.

HISTORY: No. 549 Lordship Lane was built in 1873, probably as the rectory for St Peter's church which was being constructed at the same time on the other side of Lordship Lane, on land owned by the Dulwich College Estate. The architect is currently unknown but it is reasonable to suggest that it was designed by the architect of St Peter's, Charles Barry Junior (1823-1900). Barry was the Architect and Surveyor for the Dulwich College Estate, having succeeded his father, the far more eminent designer of the Palace of Westminster, Sir Charles Barry (1795-1860), in 1858. WH Blanch in his 'Ye Parish of Camerwell, a brief account of the Parish of Camberwell, its History and Antiquities' (1875) states that the mansions and villas built on College land were '..either from his [Barry's] designs or built under his supervision'. The house was constructed of massed concrete by the contractor, Charles Drake of 37 Rockingham Street, Newington Causeway. Drake had previously constructed a number of concrete buildings and at the time was working on the Grade II* listed Down Hall near Harlow, Essex, designed by FP Cockerell. He was one of the foremost advocates of concrete as a suitable building material. The use of mass concrete, where the concrete is used to construct walls and other architectural elements by being poured in situ using shuttering, was probably imported as an idea from France where pioneers such as Francois-Martin Lebrun in the 1830s and Francois Coignet in the 1850s had used the material to construct houses and other buildings, although early English examples are known. The development of concrete was given a boost by the development of Portland cement by IC Johnson in the mid-1840s and its use in fire-proof floors from around the same date. In 1864 the builder, Francis Tall, patented a shuttering system and Drake, who had been Tall's manager, patented an improved version using standardised metal panels in 1867. By the 1970s the building had become a children's home but was unoccupied from the 1980s leading to its structural decline.

REASONS FOR DESIGNATION: No. 549 Lordship Lane, Southwark is designated for the following principal reasons:
* As a relatively early example of massed concrete construction;
* Attributed to a noted Victorian architect, Charles Barry (Junior);
* Group value with the Grade II listed St Peter's church and its church hall.