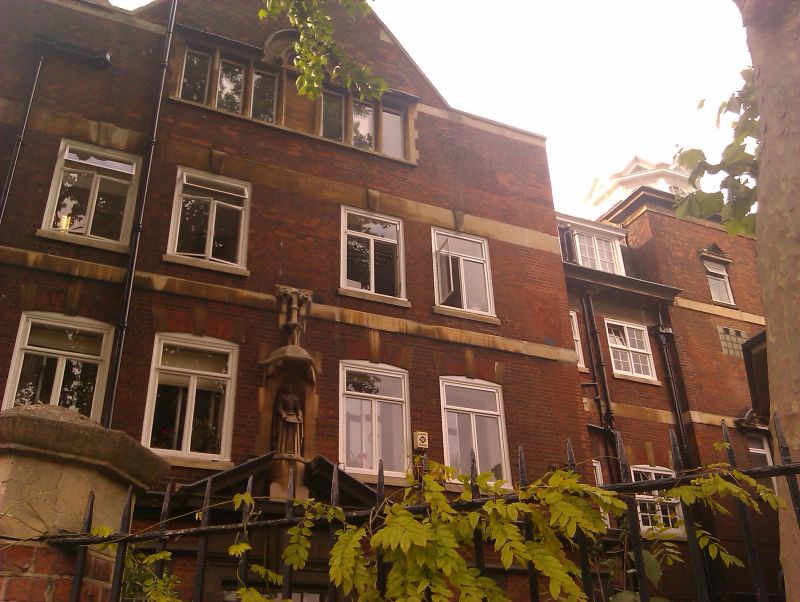 II
School, dated 1873, completed 1874; by Frederick W Roper, for the London School Board; converted to residential flats in 1990s.

MATERIALS: stock brick in English bond relieved by red and white brick; stone dressings. Original roofs renewed, but in the same style and design as the original.

EXTERIOR: The chief elevation was that published by the architect in Building News, to the east, but which is now difficult to view: here the two wings come together and the tower adds a picturesque note. The majority of the windows have flat heads with chamfered stone lintels set under brick relieving arches, with the resulting tympana picked out in a basket-weave pattern of brick. There are several high stacks with simple brick caps. The long elevation to Hunter Close has three bays of paired windows under gabled half dormers, each gable with ventilating slits in the apex, and a large bay with the 1st- and 2nd-floor paired windows set in double-height pointed-arched recesses; this bay contains an entrance marked "Infants" and finishes in a facing gable with stack running through the peak. In the tympana are the initials "SBL" and the date "1873". The return to the left contains an entrance marked "Girls" set in a pointed aedicule. There is also a single-storey addition of lesser interest.

INTERIOR: not inspected. The building has been converted to residential use but some original features such as staircases, roof structure and fireplaces may survive, although the plan form is likely to have been altered.

HISTORY: The former Tabard Street School (now a residential building known as the Tabard Centre) was built by the London School Board and dates from 1873. It was built to the designs of Frederick W Roper for the London School Board. It was originally known as the Great Hunter Street school. The school was opened just two years after the 1871 establishment of the London School Board, following the passage of the 1870 Elementary Education Act which compelled the attendance of young children at school and resulted in a surge of school building across the country. The London School Board was the most influential of the new Boards, and was responsible for vast numbers of schools across the capital, generally defined by their distinctive Queen Anne style architecture evolved by the Board's architect, E.R. Robson. Initially, however, the Board commissioned designs from private architectural practices. Where they survive, and many have been demolished or altered, schools from this period of private architect's designs are of particular interest. The London Board schools were described by Sir Arthur Conan Doyle as 'Beacons of the future!' often being the most identifiable and notable buildings in their late C19 urban neighbourhoods.

The Tabard Street School was converted to residential use in the 1990s.

REASONS FOR DESIGNATION DESCISION: The Tabard Centre is listed for the following principal reasons:
* the design has that measure of informality with hints of the Gothic Revival but an overall emphasis on direct, simple, construction, which is characteristic of the early School Board style;
* it is a fine example from the early period when Board Schools were built to the designs of private architects, before E.R. Robson's Queen Anne style schools became the norm;
* it is of special historic interest as one of the first wave of schools built after the Education Act of 1870.