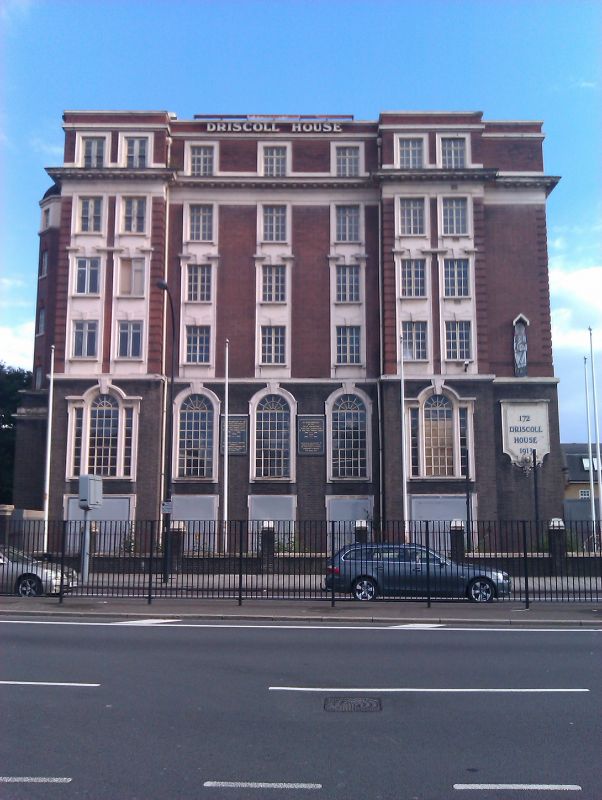 MATERIALS: red brick with painted concrete dressings to New Kent Road and front elevation facing west; brown brick with gauged red brick dressings to courtyard elevation. The external and load bearing walls are all brick but the interior makes extensive use of Mouchel-Hennebique ferro-concrete, a relatively new and innovative material, introduced into Britain at the very end of the C19. Metal-framed casement windows, with a few timber replacements.

PLAN: six-storey building: raised basement and upper ground floor, then four storeys with upper level appearing as an attic. U-plan, presenting its side elevation to the road, and with two wings enclosing what was originally a garden court and an open air lounge, below which are service rooms enclosing a small basement area. The main entrance is now in the long side of the building facing west and at right angles to the road, but access for the residents was originally the discreet garden court entrance. Original plan largely still in use at the time of inspection (2005), with kitchen, dining room, and service area in the basement, office, staff rooms, and communal rooms in the raised ground floor, and accommodation above.

EXTERIOR: the north, west and south elevations feature a continuous dentillated cornice, rusticated red brick quoins, tall round arched windows under keystones at the tall raised ground level, and the upper windows organised into narrow vertical bays also with keystones. Facing north to New Kent Road, a shallow block, seven window bays wide, the pair to each end slightly advanced. There is a canted apsidal stair tower with semi-domed top to the east end. The raised basement and upper ground floors have larger windows, those in the end bays with a Venetian windows. First to third and attic floors have rectangular windows, those in the attic above cornice level are shorter. Plaque to west side, now 'Driscoll House 1913', with cherub and scroll detail. A few windows are late-C20 timber replacements. The long main frontage to west is organised into a five part façade, with advanced end and central bays. Central entrance bay has a rusticated stone base with a prominent pedimented doorcase, and a three-storey Venetian window, capped with open segmental pediment. Wing to south is similar, but plainer, with flat gauged brick arches with keyblocks over windows, and also has a canted apsidal stair tower to east. The inside courtyard elevations facing east also plainer but with tall ground floor windows and doors under gauged red brick arches, the latter opening onto a stair with metal geometric detailing balustrades, leading to a flat roof top area (formerly the garden court).

INTERIOR: the interiors remain remarkably intact. The ferro-concrete is apparent in the construction of columns, beams, ceilings, floors, stairways and partitions between individual bedrooms or cubicles. The walls of the communal living areas are covered almost entirely with glazed tiles throughout to picture rail level. The basement dining room has brown glazed bricks, with arched openings and part-glazed doors. There are cream tiles in the kitchen and the upper public spaces. The large former common room and library have mauve glazed tiles, with matching pilasters and moulded tiles, and fireplaces with floral swags over. The former sewing room and reading rooms are the similarly finished in green, and also with arched niches and integral fireplaces. The main entrance includes an office with a glazed service window under wide arch. The stair and balustrade is metal with geometric detailing and turned balusters, this continuing the full height of the building. There is a secondary stair to the end of each wing with much simpler metal balustrades. Other surviving features in the communal areas include fixed pantry and hatch with sash servery windows. The basement laundry retains its butler's sinks and drying cabinets; staff and locker areas have been altered. The upper floors have bedrooms and bathrooms, the rooms extended down both sides of a spine corridor. Here, two tiny rooms have been combined to form one small one. These once shared a window, with a partition wall dividing the two casements: a groove in the central strut of the metal frame indicates how the partition was held. These ferro-concrete partitions have gaps at top and bottom, now blocked in. The communal bathrooms have some later alterations, too.

HISTORY: Driscoll House was opened in January 1913 as the Ada Lewis Women's Lodging House. Ada Lewis was the wife of Samuel Lewis, moneylender to the rich, philanthropist, and founder of the Building Fund which later became known as the Samuel Lewis Trust for Dwellings for the Poor. Ada Lewis was also concerned about the lack of decent housing for single working women, and when she died in 1906, she left £50,000 to endow women's lodging houses in London. In 1910 the trustees of her will purchased land at 172 New Kent Road and in 1911 work began to the designs of Joseph and Smithem. The building was completed in 1912, and it was opened in January 1913 by HRH Princess Louise, Duchess of Argyll.

When Ada Lewis House was opened it had been looked forward to for some time by those concerned for the plight of the increasing numbers of single working women in need of accommodation. Working men in need of housing had already been accommodated for in London by the Rowton Houses, but despite a number of late-C19 developments for professional women, including clubs, these were beyond the pocket of many working women. Between 1905 and 1910, at least four houses offering cheaper rooms opened in London, but some of these were still for women of slightly higher incomes, as was the case with the YWCA, which had been providing accommodation for women for some time. The Ada Lewis House offered modest lodgings and ordinary domestic services to about twice the number of women at about half the price. Other similar projects followed, but Ada Lewis House holds a significant place in the history of women's work and women's housing as the first of its scale, fulfilling a very serious need. In 1968 the building was sold, and it has been a hotel for travellers and foreign students since then, named Driscoll House.

SUMMARY OF IMPORTANCE: The Ada Lewis Women's Lodging House, now Driscoll House, was opened in January 1913, funded by the philanthropist Ada Lewis and built to the designs of Joseph and Smithem. The building has special historic interest as the first hostel on this scale in London providing accommodation for the large numbers of working women from the growing class of those employed in clerical or similar work. Both its scale and aims are distinct from earlier examples, and the building has an added significance for being the first of its kind especially for women and equivalent to the better known Rowton hostels for men. Ada Lewis House also has special architectural interest for its well composed and crafted free English Baroque revival exterior that represents the philanthropy of its benefactor and the idealism of its origins. The historic interest is manifest in the integrity of the original plan form and finishes, including a number of glazed tile communal rooms, that illustrate the original arrangement of the building. These remarkably intact internal arrangements represent the changing reality of the lives of growing numbers of women at the start of the C20. Furthermore, there is some interest to the relatively early use of ferro-concrete in a residential institution.