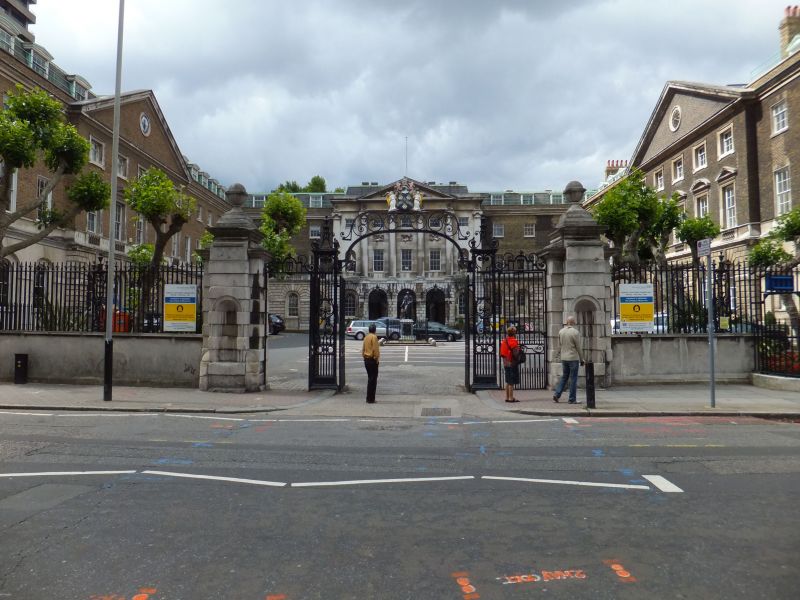 Hospital and chapel. 1721-5 & 1728 with other C18 additions,
part rebuilt later C20. Ranges around inner quadrangles,
1721-5; central main entrance block by Thomas Dance, 1728
(remodelled by Richard Jupp, 1774); east wing originally by
James Steere, 1738-41, completely rebuilt in facsimile after
World War II; chapel and west wing by Richard Jupp, 1774-7.
MATERIALS: centre block: multi-coloured stock brick and
Portland stone; slate mansard with dormers behind brick
parapet over stone cornice to outer sections. Wings similar,
with stucco to ground floor; slate mansard with dormers with
alternating triangular and segmental pediments to side
sections behind brick parapet above stone cornice.
PLAN: large forecourt with buildings on 3 sides, 2 inner
quadrangles behind.
EXTERIOR: centre block: 3 storeys, sunk basement and attic, 13
bays. Projecting central frontispiece of 5 bays in stone with
rusticated ground floor containing 5 round-headed openings
with rusticated voussoirs, the central 3 bays, with decorative
wrought-iron gates and fanlights, forming an open arcade
leading to the cloister behind, the outer ones glazed in
round-headed recesses. Above, 4 giant Ionic attached columns
flanked by 2 giant Ionic pilasters rise through 1st and 2nd
floors to support entablature with paterae in frieze, with
pediment above over central, slightly projecting 3 bays.
3 panels with bas reliefs of putti between 1st- and 2nd-floor
windows, statues of Aesculapius and Hygeia in niches at 1st
floor, and allegorical figures in tympanum all by John Bacon.
Stone rustication continues across outer sections of ground
floor, which are set in advance of upper floors and have
rusticated voussoirs to recessed round-headed windows, and
balustraded parapet above. All windows are sashes with glazing
bars and flat, gauged-brick arches.
West wing: 3 storeys and attic, 15 bays. Slightly projecting
central section of 5 bays with ground-floor of rusticated

stone containing round-headed sash windows with glazing bars
in round-headed recesses with rusticated voussoirs and plain
band at spring, the central opening a double door of 8 panels
with radial fanlight, cornice head, and iron gates with
overhanging lamp holder. Keystones support cornice with broad
band above containing balustraded panels beneath 1st-floor
windows. Stone architraves to 1st- and 2nd-floor windows, with
pulvinated friezes and alternating triangular and segmental
pediments over cornices to 1st-floor windows. Stone-coped
pediment above stone cornice containing clock face.
Side sections are stucco at ground floor with similar windows
and doors with keystones supporting cornice beneath broad band
at 1st-floor sills continuous with that across central
section. All 1st- and 2nd-floor windows are sashes with
glazing bars, outer sections with gauged, flat brick arches.
Gabled end of 5 bays to street.
East wing (Boland House): a copy of west wing except that it
has a sunk basement, a wind-vane dial in the pediment instead
of a clock, and no doors to side sections or iron gates with
overhanging lamp holder to central door. Unmatching,
pedimented 5 bay end to street.
Chapel in centre block of west wing: Richard Jupp c1775 with
remodelling of sanctuary, 1959. Almost square plan with
galleries on 3 sides, altar at west end. Chapel, which is
approached through narrow vestibule beneath east gallery which
contains stairs leading to galleries, has aisle of 4 bays
formed by Ionic columns supporting north and south galleries.
A 5th bay to the west contains the sanctuary in the centre, a
vestry to the north and an organ chamber to the south.
Entablature above columns has dentil cornice and fluted frieze
with paterae, which continues along west wall, broken only by
round arch with blue marble architrave, above altar.
Round-arched (later) stained-glass windows to central 3 bays
of sanctuary, a square-headed leaded one to each gallery
either side. 5 sash windows to east gallery. Doors with radial
fanlights to vestibule at east end.
In centre, a shallow niche with a monument in white marble to
Thomas Guy by John Bacon, 1779. It depicts the founder
assisting a sick man into his hospital which is shown in
relief in the background. A decorative cast-iron railing forms
semi-circle around.
Groin-vaulted plaster gallery roof supported on columns with
foliage capitals. Flat plaster ceiling to main body of chapel
with circular motif in centre and framed by groined
semi-vaults.
Quadrangle ranges south of main entrance: rectangular plan
with 2 inner courtyards separated by a loggia of 10 bays with
round-headed arches on stone piers running north/south.

Elevations to courtyards of 3 storeys with attic in mansard
roof, east/west elevations 8 bays, north/south elevations 7
bays. Round-headed arches to stone ground-floor with keystones
and impost blocks, originally filled in c1780 with windows
(and some doors). Upper floors of brick have segmental,
gauged-brick arches to sash windows with glazing bars. Much
rebuilt after war damage.
INTERIOR: not inspected.
The chapel is a unique survival, the only C18 hospital chapel
in England. It was restored in 1980.
(Survey of London: Roberts H: Bankside: London: 1950-).