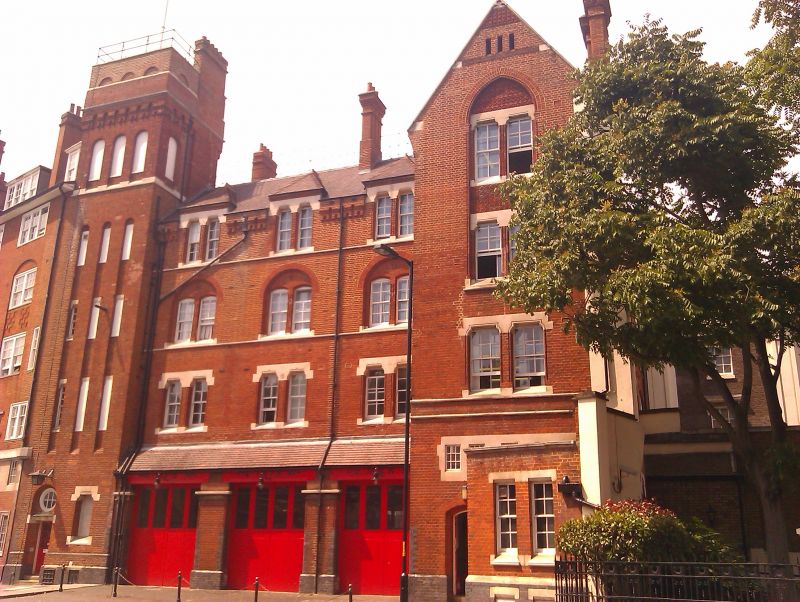 GV II
Fire station, 1878, by Alfred Mott, chief architect to the Brigade under the Metropolitan Board of Works, and 1911 by the Fire Brigade Branch of the London County Council Architects Department, job architect W E Brooks.

EXTERIOR: the four-storey Gothic Revival elevation to Southwark Bridge Road comprises a gable-facing cross wing of one window to the right, a recessed central range of three windows containing the appliance bays, and a five storey watch tower to the left. The three appliance bays project slightly under a pitched tiled roof and have characterful lettering and decoration to the lintels reading 'MFB', '1878' and 'MBW'. All the upper-floor windows are pairs with slim brick mullions and stone lintels and sills. Those to the second floor of the central range are segmental-arched and set in round-arched recesses; the lintels of the third floor windows break the corbelled eaves to terminate in hipped dormers. The windows to the cross wing are set in a pointed relieving arch in the gable end; the arch has terracotta diapering, as does the apex of the gable. The square watch tower has slit windows set in slender round-arched recesses. The top stage has three round-arched lights, a corbelled parapet and an attic storey, the latter added in 1911. The return elevation to the north has scattered fenestration. Of the handful of early fire stations designed in the 1870s, as the type emerged from the mere adaptation or emulation of houses to become identifiable, landmark buildings, only Tooley Street, Hampstead and this section of Southwark station survive.

The extension of 1911 to the south has five storeys plus attic with dormer windows and basement. Using a mixture of polite architecture, such as the stone plinth and relieving arches, and vernacular forms, such as the barely projecting canted bay and dormer windows, Brooks created interest in what would otherwise be a vast elevation. The ground floor comprises four appliance bays with modern doors to the left and a vehicular access arch to the right. The elevation is symmetrical on the upper floors: the central four bays have canted bay windows to the first and second floor set in segmental relieving arches which rise to frame the bands of sash windows on the third floor; the outer two bays, which are narrower, have pairs of sash windows set into the relieving arches rather than canted bays, and patterned brickwork in between the second and third floor windows adds interest. The fourth floor windows, bands of sashes of varying widths, are set just under the eaves. The relieving arches and diapering connect this elevation to that of the 1878 wing alongside it; like the best of LCC architecture of this era, the extension to Southwark Fire Station was sensitive to its immediate context.

The vehicle arch has round windows set in glazed brick arches and leads to the drill yard at the rear from where the rear elevation is visible. The 1878 and 1911 buildings are more interconnected here, with the staircase bay of the 1911 extension overlapping the watch tower. The arrangement of the 1878 section is similar to its façade with rear access to the appliance bays in the central range and comparable fenestration and corbelled eaves, but no dormer windows and only one relieving arch, this with blue brick rather than terracotta diapering. The roof of the appliance bays has been replaced. The 1911 section is more utilitarian than its facade, in yellow stock brick, but the two gabled stair towers and arrangement of irregularly-shaped windows including a canted bay, a dormer, an oculus and a large semi-circular window add interest. Balconies run across the third and fourth storeys of the elevation, providing access to the former firemen's flats.

Running west from the five storey range of the 1911 section is a series of low-storey buildings, only some of which are of special interest. The contemporary two storey half-hipped roofed range facing the drill yard and the double-pitched, glazed-roofed section behind it are of interest as an integral part of the original building; these were offices (the room with the mullioned bay window), and a paint and repair shop for fire engines, as is clear from the surviving carriage openings and glazing in the roof to admit daylight. An extension to the west of this range, in red brick, is of lesser interest. In the late C20, these buildings have been enveloped by larger, yellow brick buildings which are not of special interest; the divide between the historic and modern sections is easily identifiable. The buildings of Winchester House are listed separately.

INTERIOR: The interior has been quite altered, but retains a few features of note. There are original staircases, with metal balustrades and handrails; segmental arched door openings leading from the stairs; a number of sliding poles with timber double-doors; a fireplace and two re-sited historic stone plaques in the reception area; and some simple partitioning in one of the offices in the 1911 section. The appliance bays in both sections retain their iron uprights and girders, some in the 1878 section with decorative capitals; the 1911 appliance bay has been subdivided in part. The vast majority of the internal doors have been replaced. The upper storeys of both sections contain long spinal corridors, off which are offices, recreation rooms or dormitories; the former firemen's accommodation plan is not readable inside, although the external balconies and the doors and windows on the rear elevation still indicate the old arrangement. A room in the upper storey of the west-east range in the drill yard contains half-height panelling.

HISTORY: Fire services in London emerged principally from the need for insurance providers to limit their losses through damage to buildings and property in the period after the Great Fire of 1666. Initially each insurer maintained a separate brigade that only served subscribers until the foundation of an integrated service in 1833, funded by City businesses. In 1866, following an Act of Parliament of the previous year, the first publicly-funded authority charged with saving lives and protecting buildings from fire was founded, the Metropolitan Fire Brigade. Under its first Captain, Eyre Massey Shaw, the Brigade purchased a former workhouse of 1777 and an adjoining site on Southwark Bridge Road. The building had been a private house and hat factory since the early C19 and became Massey Shaw's residence and the Brigade headquarters. The site was developed to serve its new function: in 1878, with the fire station to the south by Mott; in 1883 with a grand Gothic wing to the east by Robert Pearsall, Mott's successor as chief architect, hiding the former workhouse building from the main road; and finally in 1911. The Pearsall wing was demolished soon after WWII.

The Fire Brigade was initially part of the Metropolitan Board of Works, whose architects designed the first fire stations. It was in the 1870s that a fire station-type of identifiable, landmark building emerged from the previous practice of adapting or emulating domestic buildings. Of the handful of early fire stations designed in the 1870s only Tooley Street, Hampstead and this section of the station at Southwark survive; Southwark is thus of special interest for its rarity. Southwark is the most influential of these surviving stations because, as headquarters, it established a prototype for stations built across London in the 1880s. By the time the extension was built in 1911, the Fire Brigade was part of London County Council. From 1896 new stations had been designed by a group of architects led by Owen Fleming and Charles Canning Winmill, both formerly of the LCC Housing Department. They brought the avant-garde approach which had evolved for new social housing to the Fire Brigade Division, as the department was called from 1899. The extension to Southwark Station was one of their more standardised plans, but the treatment of the façade in particular is characteristic of the subtle and stylish designs produced by the LCC Architect's Department in the early part of the C20.

REASONS FOR DESIGNATION: Southwark Fire Station is listed for the following principal reasons
* the 1878 section is notable for its rarity as an early, identifiable fire station type with landmark qualities as seen in the watchtower;
* the 1878 station was also an influential prototype, establishing the model for stations built across London in the 1880s;
* the 1911 extension has special interest in equal measure for the quality of the elevational treatment which is exemplary of the LCC Architects' Department's work;
* there are very few fire stations with multiple-phases of building and the contrast at Southwark illustrates the development of fire station design in two periods of expansion for the London Fire Brigade;
* special historic interest as a significant element of a complex of Fire Brigade buildings, including the home of Captain Eyre Massey-Shaw and the Fire Brigade Headquarters from 1878 to 1937. The sheer scale of Southwark Station identifies it as an unusual station and the additional appliance bays and workshops in the drill yard are physical reminders of its role as headquarters, and the fifty years in which London's fire service provision was directed from this site.