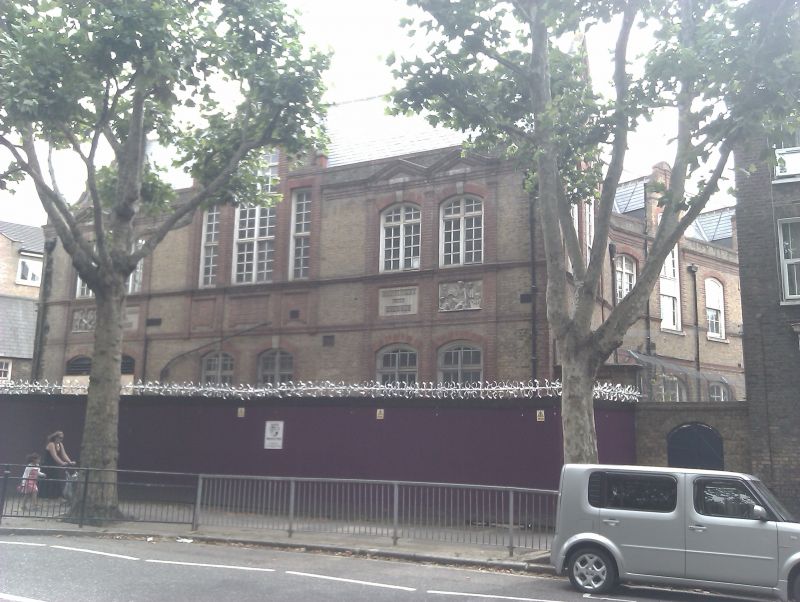 School and schoolkeeper's house. 1873-74, extension of 1899.
By ER Robson. For London School Board. Yellow brick with red
brick dressings and slate roof.
PLAN: block to Southwark Park is of 2 storeys and rectangular
in plan, 7-window range. An extension of 1899 in a
complementary style to the rear of this block, and a handsome
schoolkeepers house with Dutch gable facing Southwark Park
Road.
EXTERIOR: symmetrical front, the parapet interrupted by a
shaped gable. The windows are 'framed' by a 2-dimensional grid
of red brick pilasters, cornice and string courses that
articulates the elevation.
All windows unless otherwise stated are segmental-arched;
tripartite window under shaped gable with segmental-arched
centre light; flanking lights are flat-arched. First-floor
windows in outer paired ranges are topped by a pediment which
is incorporated into the parapet. Beneath the 1st-floor
windows in the outer ranges, and forming a spandrel panel, are
2 sculptural reliefs which depict children learning; to each
an inscription panel with the words "School Board for London"
and "Southwark Park Schools". South elevation and rear with
shaped gables, a motif continued in the ranges to the
courtyard at the rear.
The courtyard to the rear of the main block presents a most
picturesque and successful space, although formed, in part, by
buildings of at least 2 periods. All glazing of an authentic
design: casement with fixed or pivoting lights above; those on
the north side have 8x8 sashes with fixed lights above.
INTERIOR: not inspected.
A fine example of an early school by Robson in a style which
would be most influential to later school boards across the
country.