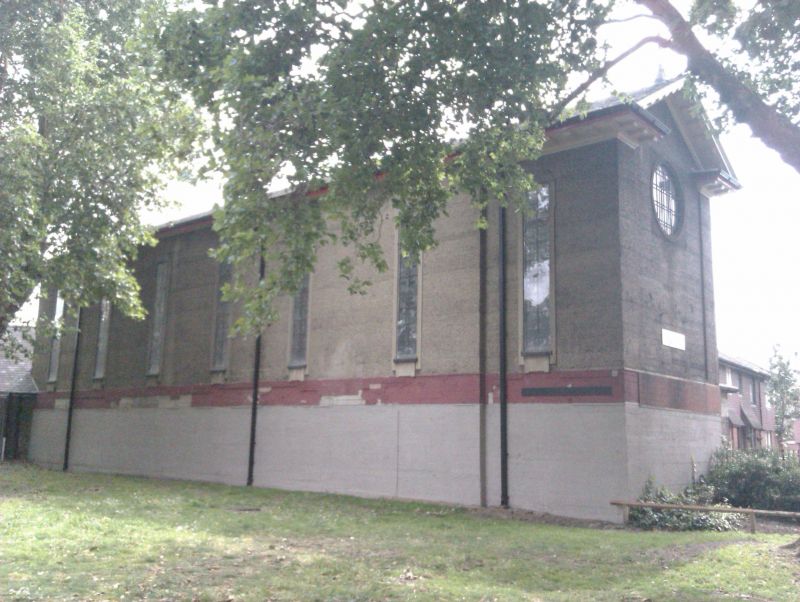 Mission church, later converted to studios. c1900 and
1911-1912. By John W Simpson and Maxwell Ayrton. For Clare
College, Cambridge.
MATERIALS: ferro-concrete wall; shallow pitched roofs of tile,
with broad eaves and gable facing to short ends.
STYLE: Italianate.
PLAN: rectangular with a transept-like projection from the
south side near west end; the transept flanked by
single-storey entrance porches; single-storey polygonal apse
at east end. Incorporates remains of earlier single-storey
parish room which now projects from the north-east corner of
the east end, obliquely towards the park.
EXTERIOR: windows to nave are segmental-arched with shouldered
and eared flush architraves; apron sills; band of tile below
sills demarcates a plinth approx 2m high. Upper section of
west wall pierced by roundel. Original lead caming of
decorative design now damaged.
Transept, south elevation: pair of double, flat-arched lights
intersecting tile band; under the eaves a wall-mounted
bellcote, above which a chimney breast running through the
eaves to terminate in a rebated stack; the breast flanked by a
pair of flat-arched windows. Round windows to porch tucked
into corner at south-west end, and in upper reaches of east
elevation.
INTERIOR: not inspected.
HISTORICAL NOTE: the mission was staffed by undergraduates
from Clare College, Cambridge, and run by the Church of the
Epiphany Mission in Bermondsey. One of the earliest reinforced
concrete churches in London, the structure was converted into
artists' studios in the late 1960s.
(English Heritage London Division Historians: Clare College
Mission Church).