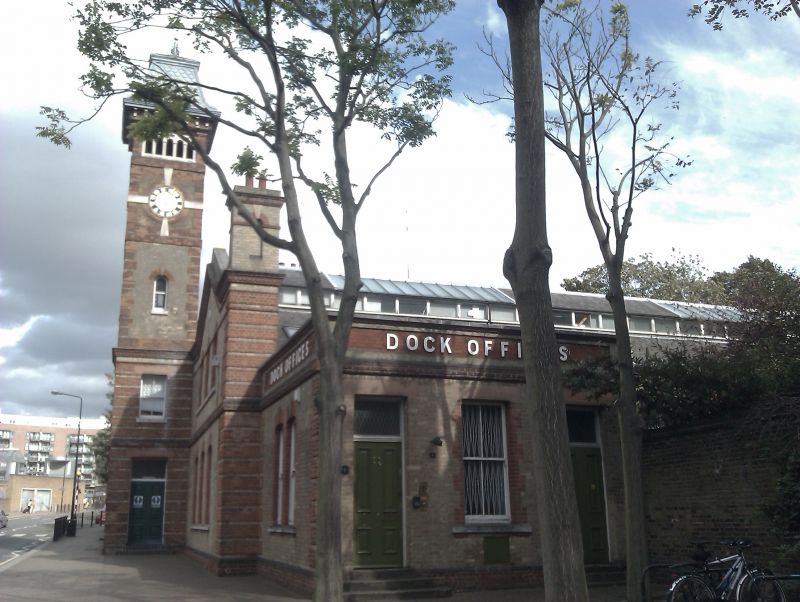 EXTERIOR: The two-storey building is constructed of yellow stock brick with red brick detailing, and arranged in a rough J-shape. The windows are two-by-two pane timber sashes with segmental arches, yellow brick keystones and red brick surrounds. The corners of the building have red brick rusticated quoins. There are two main blocks fronting Surrey Quays Road, arranged either side of a prominent central clock tower. The tower has a pavilion roof with fishscale slate and a weathervane above and bracket cornice below. The ground and first floors of the tower have banded red brick rustication with red brick quoins above and stone arcading in the belfry. There is a side entrance with a stone wedge lintel above.

The block to the left of the tower is the former Superintendent's Office and has a pitched roof. The principal elevation consists of a central porch and large bay window to its left. Both have hipped slate roofs and red brick banded rustication. There are a number of plaques to the right of the porch. The eastern return has a pedimented gable with a small keyed oculus flanked by two projecting end stacks. Projecting to the rear is a two-storey, pitch-roofed wing, slightly set back and with plainer fenestration detailing. This was originally the Janitor's House and was separate to the former Superintendent's Office with its own entrance on the north east elevation. It has since been opened up to form part of the main block but with the original entrance still present. At ground floor level on the north east elevation there are horizontal strips of red brick banded rustication between each window. To the rear of the former Superintendent's Office, the fenestration detailing is also plainer and there is an ornate cast iron glazed porch over the doorway to the right.

The block to the right of the tower is the former General Office, a two-storey workshop building with a monitor roof (roof with a raised ridge with clerestory windows). It comprises 14 bays, separated by yellow brick pilasters and with parapetted gable ends. Each bay consists of a pair of small windows with red brick segmental arches on the first floor, interspersed (roughly every fourth bay) with plain red brick rectangular panels. A single-storey yellow brick continuous bay with entrances runs around three sides of the building; this is of a later date but with similar detailing. The gable end facing Surrey Quays Road has a small carved stone with the date 1892. Directly to the right here is a single-storey square block, slightly set back. This has a flat roof with a brick parapet and white painted timber lettering is affixed to the parapet panels reading, 'Dock Offices'. Similar lettering is attached to the south-eastern gable end of the main workshop building, which also features a central projecting end stack.

INTERIOR: Considerably altered and the special interest of the building is primarily external. A few original features survive, including some door frames, altered panelled doors and a staircase with a cast-iron balustrade and timber handrail in the former Superintendent's Office.

HISTORY: The Dock Offices were built in 1892 for the Surrey Commercial Docks. A dock on the Rotherhithe peninsula was originally constructed at the end of the C17 to alleviate pressure on the Royal Dockyard at Deptford, where ships were repaired. Known as Howland Great Dock, it was designed by John Wells, built in 1696 and opened in 1700. Howland Great Dock was the largest of its kind, accommodating 120 ships. In the mid-C18 it became known as Greenland Dock, due to its connection with the Greenland Whale Fishery. By the beginning of the C19, however, trade had turned to Scandinavian and Baltic timber and to Canadian grain. New docks were constructed from the early to mid-C19, under the management of three separate companies. These amalgamated in 1864 to form the Surrey Commercial Dock Company, which further extended the docks system with the construction of Canada Dock in 1874. In their heyday the docks covered an area of 460 acres and included nine docks, six timber ponds (`mast ponds', used to season the timbers used to make masts) and a canal, dealing principally with the trade and storage of timber.

The Dock Offices remained in continuous operation with little alteration in the C20, until the gradual decline in the need for timber in building construction led to the closure of the commercial docks in 1969. Subsequently the building was left unused until 1985, despite development proposals being brought forward for its adaption for Goldsmiths College School of Art in 1972. The commercial docks, with the exception of Greenland Dock and South Dock, were filled in at this time.

From 1981 the London Docklands Development Corporation (LDDC) redeveloped the infilled Surrey Docks site with housing and a new road system. The former entrance road to the dock site became Surrey Quays Road, allowing greater access to the former Dock Offices, which were restored by the LDDC in 1985 for their own use. The roof structure and coverings of the Superintendent's Office, clock tower and Janitors House were replaced. Work also included the underpinning of the Janitor's House and the northern gable end of the General Office. A collection of single-storey, rear, ancillary buildings, including a two-storey fuel store on the southern elevation of the Janitor's House, were demolished and the garden re-landscaped. The LDDC occupied the former Superintendent's Office block until the 1990s, while the former General Office was partitioned into small units and separately leased.

REASONS FOR DESIGNATION:
The former Dock Offices, built in 1892 by the Surrey Commercial Dock Company, are listed for the following principal reasons:
* Architectural Interest: A grand, well-detailed, purpose-built Victorian dock office, with a particularly striking central clock tower;
* Historic Interest: one of the last surviving features of the former Surrey Commercial Docks, one of the largest and most important of London's docks in the C19 and C20;
* Intactness: a well-preserved exterior which, through its architectural form and surviving signage, remains clearly legible as a dock office building.