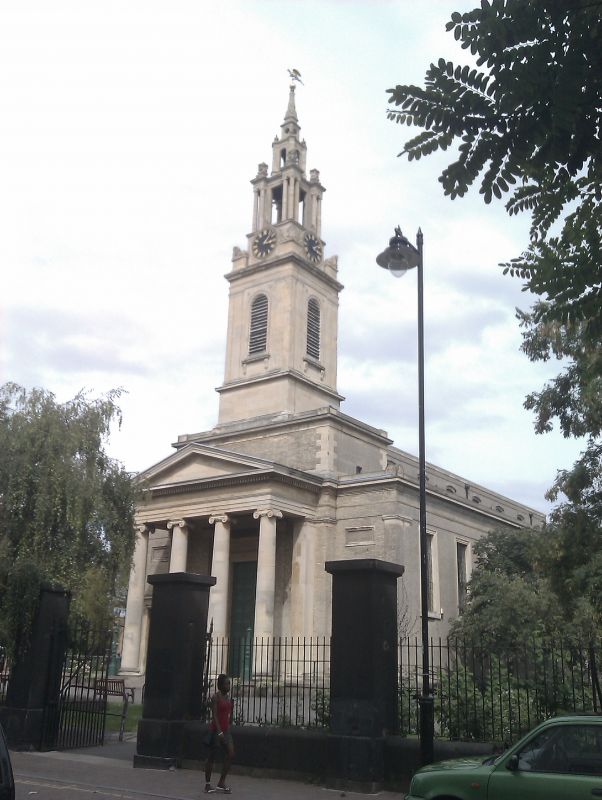 Church. 1827-1829. By James Savage.
MATERIALS: stock brick with yellow stone dressings, pitched
slate roof.
PLAN: rectangular plan 2-storey church with tetrastyle Ionic
portico to 5-bay west end, nave with clerestory and aisles,
8-bay elevations to north and south. Tower of 2 stages resting
on abutment with stone quoins breaking out from clerestory at
west end.
EXTERIOR: stone portico to centre of west end has unfluted
Ionic columns supporting architrave, frieze and dentil cornice
with pediment. Corner pilasters rest on stone plinth; stone
cornices with blocking course to aisle and higher clerestory
sections. West end has giant panelled door to centre with
stone architrave, frieze and cornice; similar lower doors in
outer bays with stone panels above. Tall square-headed windows
with battered stone architraves and leaded lights to aisles; 6
similar clerestory windows above to north and south in
recesses with segmental brick arches.
Tower has Doric pilasters to square-plan lower stage with a
round-arched, louvred bell opening to each face; upper stage
rather Baroque with groups of 3 columns at angles supporting
urns. Spire above surmounted by gilt ball and spike with large
flying gilt dragon weather vane.
INTERIOR: altered 1965 with west end and aisles (with roofs
sloping inward for stepped gallery above) divided off to
create separate rooms. Gallery on square piers round 3 sides,
with Ionic columns above supporting clerestory wall, the lower
part of which is an entablature. From this paired columns rise
to support cornice and are continued in paired beams across
the roof; deeply coffered ceiling. Large paterae in roof bays
to gallery.
FITTINGS: organ by Bishop and Son, 1829, in round-arched
western extension of west gallery. Corresponding, round-arched
eastern extension for reordered sanctuary contains large
painting of the Ascension.
The most expensive of the London Commissioners' churches (they
gave 17,666) with the parishioners also making large
contributions to the total cost of 21,412.