Tower Bridge (That Part That Lies Within the Borough of Southwark)

A Grade I Listed Building in Southwark, Southwark 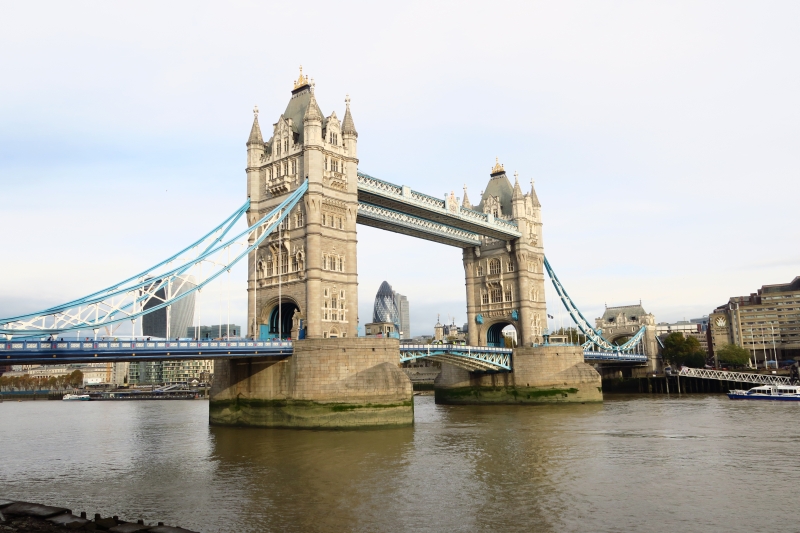 Entry Name: Tower Bridge (That Part That Lies Within the Borough of Southwark)

Bridge. 1886-94. By Sir John Wolfe Barry, engineer and Sir
Horace Jones, architect. For the City Corporation.
Low level bascule bridge with wider side spans hung from
curved lattice girders; central narrower opening section.
Steel structure with twin Gothic towers rising from 21.3m
(70ft) broad piers which support the bascules and house their
counter balances.
Towers clad in rock-faced stone with ashlar dressings; high
pitched slate roofs behind stone battlemented parapet. High
level footbridges between the towers, incorporating ties
between the 2 suspended spans and linking whole bridge
together as continuous structure. Tower of 4 stages with
corner turrets surmounted by pinnacles. Some architectural
detailing added after Jones's death.
Above archway, elaborate Gothic-style windows on each level
surmounted by dormer feature in roof; moulded string courses
between floors. Lower approach tower (with twin on north
side), in similar Gothic style and with a large elliptical
archway spanning the road.
Although the bascules were electrified in 1976, some of the
hydraulic machinery by Armstrong Mitchell & Co., and the steam
pumping engines, are preserved under the south approach
viaduct.
Built onto east side of southern approach are accumulator
tower and chimney stack (qv).
See also London Borough of Tower Hamlets.