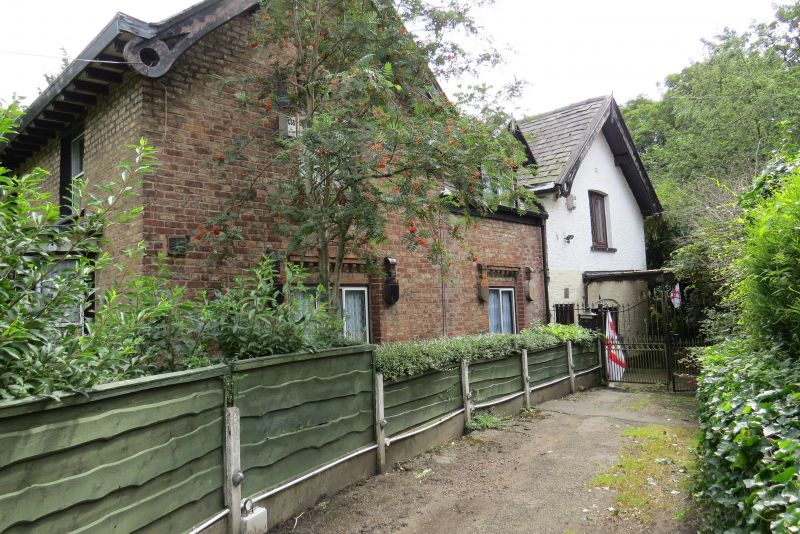 Pair of cottages. Mid C19 but with substantial remains of
earlier core - probably C17. Brick with remains of
timber-framing, and Welsh slate roof.
EXTERIOR: 2-storeyed, the 2 cottages form a picturesque
composition with parallel ranges originally symmetrical and
joined by a lower wing.
No.390 apparently entirely mid C19. Doorway is centre of main
elevation, in recessed porch with timber lintel and decoration
in the spandrels, and projecting squared bay windows each
side, possibly added in later C19. Sash windows above. Gable
wall has inserted windows but the ornamental hoodmoulds of
earlier openings survive. Steeply overhanging eaves with
decorative bargeboards in gable. Lower wing to right, with
similar window to ground floor, and gabled dormer in roof,
with overhanging eaves with finial. End wall and axial stacks.
This lower wing links to the gable end of No.388, the main
range of which is parallel to that of No.390. Painted brick
with remnants of timber-framing in square panels to right, and
heavy slate roof. Left-hand section probably rebuilt in brick,
and with inserted windows in projecting brick panel. Advanced
gable to right a separate build, also painted brick, but
roofed separately in Welsh slate. Doorway in angle of this
gable in added porch. Advanced right-hand gable has inserted
windows in original openings with dentilled hoodmoulds over.
Decorative bargeboards to overhanging eaves. Stacks to rear.
INTERIOR not inspected.