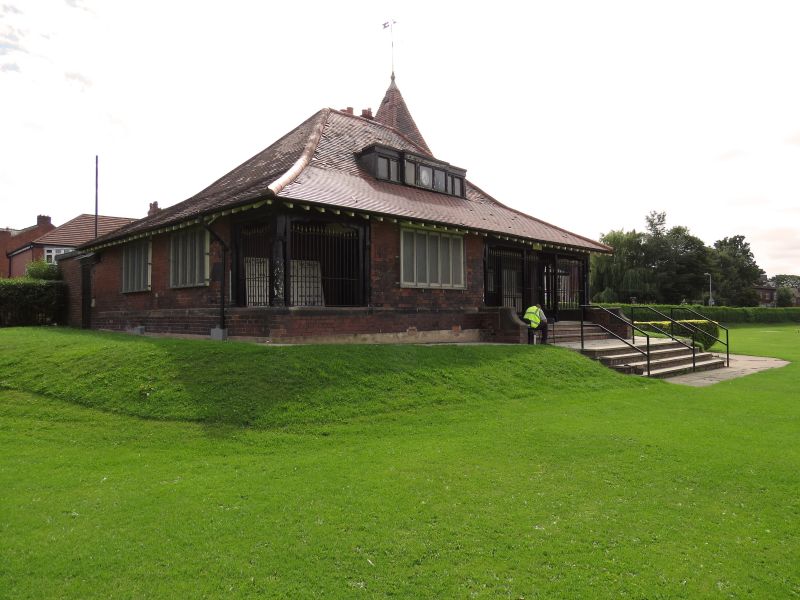 Sports pavilion. 1899 by James Murgatroyd of Mills and Murgatroyd, for Manchester Grammar School. The separate C20 toilet block to the rear is not of special interest. Built in vernacular style with red brick in English Garden Wall bond (3:1), some stone dressings, tower with half-timbering to first floor, and red tiled roof with deep overhanging eaves.
PLAN: Rectangular plan with half verandah to front and square tower in south-east corner.
EXTERIOR: Two storeys; the upper storey in the tower and attic. The main façade of the pavilion, which faces west across the playing field, has a deep hipped roof with sprocketed eaves supported on timber columns with ionic capitals. The eaves overhang a ground-floor changing room, the verandah, and a boot-cleaning area in the north-west corner. The main entrance, to the rear of the verandah, has double doors with flanking windows over vertical timber-framing. The changing room projects forward on the north side of the verandah with a five-light window and a side doorway into the boot-cleaning area, which is contained by a plinth-level brick wall with chamfered stone capping. The attic rooms are lit by a wide dormer window with three lights to either side of a central clock, with a second dormer window to the rear façade. To the rear of the roof ridge is a four-flue stack. The south side is dominated by the tower, which has a pavilion roof with sprocketed eaves, an original weather vane at its apex, and tall two-flue chimney stack on its east side.
INTERIOR: On the ground floor is a large pavilion room, a changing room for the home team and one for the visitors, a wash room, and in the tower there is a caretaker's room with a staircase up to the first floor. An adjacent scullery has a serving hatch through to the pavilion room. The two baths in the washroom have been replaced by showers, but otherwise the layout is as built. On the first floor there were originally two bedrooms, now used as additional changing rooms, and a lumber room. The pavilion room has a vertical timber panelled dado, picture rail and moulded cornice. Throughout the building the majority of doorways retain the original five-panelled doors, and all the fireplaces on ground and first floors retain their chimneypieces, two with original fireguards. Also surviving are original benches and lockers, some with clothes hangers over, and cupboards.
HISTORY: The building was opened by the Lord Mayor of Manchester on 1 August 1899. It cost £1,125 with £782 to drain and prepare the pitches, which required an extensive drainage system as they are on the floodplain of the nearby River Irwell. The grounds and pavilion were sold to Salford City Council in 1934 when Manchester Grammar School moved to Rusholme and are still used by local schools.

The Sports Pavilion of 1899 is of special architectural interest as a specialist building type, built in a vernacular Arts and Crafts style, and retaining its original layout and most of the original fittings related to its sports function.