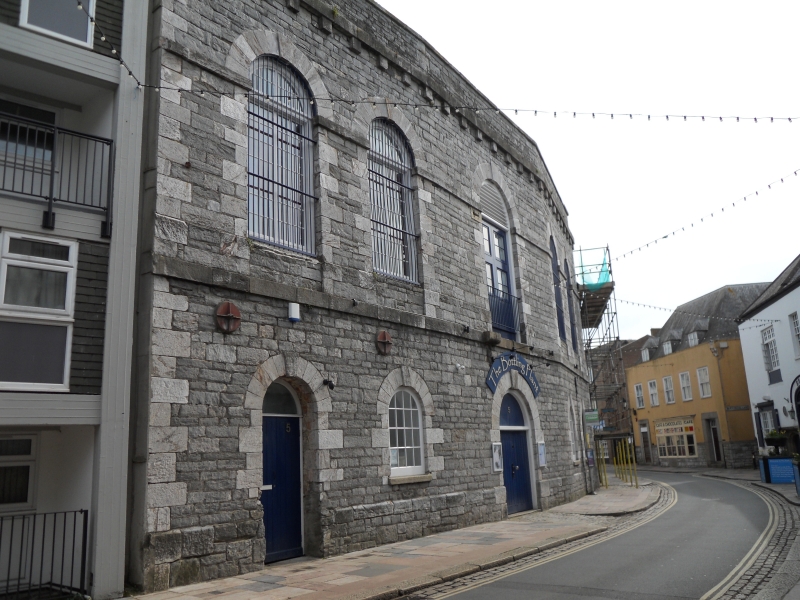 MATERIAL: coursed Plymouth limestone and dressings in a lighter colour, all under slate roofs.

EXTERIOR: it is a two-storey building. The five-bay south-west elevation facing Southside Street is symmetrical and slightly canted. At the centre is the main entrance with a double-leaf door and blocked fanlight. Above is a double-leaf taking-in door with a louvered fanlight. To the left side of the door jamb is a corbel and drill holes that would have secured a former swivelling loading hoist. The central bay is flanked on both floors by pairs of windows. All the openings have keyed rounded arches and large dressed quoins. Two ground-floor windows have been blocked, and another has been lowered to create a secondary entrance at the western end. The other windows have timber casements and are secured by iron bars. This elevation also has ashlar quoins, a plinth, mid- and first-floor string courses and a substantial parapet with large dentil blocks to the cornice. Behind the parapet are two hipped roofs running east to west, the right-hand one being substantially larger than the left, and with a gable end on the east side. The north-east elevation facing The Parade is rendered and topped by a copped gable. Part of this elevation has been decorated by Lenkiewicz’s mural. Known as the Barbican or Elizabethan Mural, it depicts Elizabethan figures including William Shakespeare and Queen Elizabeth I, and deals with Jewish-influenced metaphysical ideas current in England during the period of 1580-1620. The composition is loosely based on the Hebrew letter ‘aleph’. Vertical timber battens have been fixed to the mural. A fanlight to a former ground-floor opening is visible to the centre. To the right is a further bay, undecorated and containing a modern, metal door. A large stone buttress projects from the north-eastern corner of the building.

INTERIOR: the ground floor has a regular arrangement of cast-iron columns supporting large timber ceiling joists. The ends of the joists rest on stone corbels. The floor is covered in large stone slabs. The position of a former weighing machine is visible in a scar on the floor near to the main door, and hanging from the ceiling above is an associated iron rod and hook. There is a metal circular staircase, with some decorative details, in the north-west corner. The timber staircase on the eastern side of the room, and plasterboard partitions in the south-west corner are late-C20 additions. In the south-east wall stone relieving arches are visible on both floors and some represent blocked openings. The first floor has large timber floorboards and the space has been subdivided by early-C20 timber partitions. A cross-axial ceiling beam at the northern end is supported by stone corbels and two cast-iron columns. Near the centre of the room is a large trap door and in the ceiling above is a timber support for a hoist. In south-west end wall is large central plank door on metal rollers and two further openings of various phases on either side, all of which have been blocked. The building is topped by a large queen-post (south), and smaller queen-truss roof (north).

The warehouse was built at the north end of Southside Street in the mid-C19 on the site of earlier buildings. It was a large extension to the adjoining warehouse (6 Southside Street; Grade II) and linked by an internal first-floor door. The 1891 Charles Goad Fire Insurance Map for Plymouth records Number 5 as a bonded spirit store for Coates and Co (Plymouth Gin), whose distillery was located on the opposite side of Southside Street. By 1901 the bottling of gin was also taking place on the first floor of the warehouse. In about 1970 a structure attached to one end of the building's south-east elevation was demolished as part of a clearance programme of buildings at the north end of Sutton Harbour and The Parade. From the late C20 the ground floor of the warehouse was occupied by a pannier market (closed in 2014). In 1972 a mural was painted on the north-east elevation by local artist Robert Lenkiewicz. The first floor became his art studio and store from 1981 until his death in 2002. He also occupied the former public house attached to the south-east side of Number 5 and these two buildings were connected via an opening at first–floor level.

Robert Oscar Lenkiewicz (1941-2002) was a painter born in north London to Jewish-immigrant parents. He left his home in Hampstead in 1964 at the urging of his neighbours who were unhappy with his artistic endeavours which included inviting homeless people into his home to paint. He eventually settled in Plymouth in the late 1960s. In 1972 he completed the full-height mural on the north-east elevation of 5 Southside Street. The mural was briefly covered over on 1 April 1981 when Lenkiewicz white washed the wall and painted a trio of flying ducks as a practical joke following a dispute with the local council. The mural has faded over time. In the late 1990s battens were attached to the wall, ostensibly to facilitate a restoration of the mural, though this has did not take place. As well as his large catalogue of portraits, Lenkiewiz was also responsible for several other murals in and around Plymouth. Many have been lost; however, existing works include interior murals within Plymouth Guildhall (1977) and The Round Room, Port Eliot, Cornwall (1970s-1990s). Lenkiewicz was a controversial painter whose various art projects included the Vagrancy Project in 1973.

5 Southside Street, Plymouth, a mid-C19 warehouse, is listed at Grade II for the following principal reasons:

* it has an imposing external design enhanced by contrasting colours of local-Plymouth stone;
* internally, the building retains many historic features, including floors, ceiling beams and cast-iron columns.

* it is a good example of a mid-C19 warehouse which was adapted to a bonded warehouse for Coates and Co.;
* it was used as a studio during the late C20 by Robert Lenkiewicz, a prominent artist who worked extensively in Plymouth and the South West, and his Elizabethan Mural covers a large part of the building’s north elevation.