A Grade II* Listed Building in Plymouth, City of Plymouth 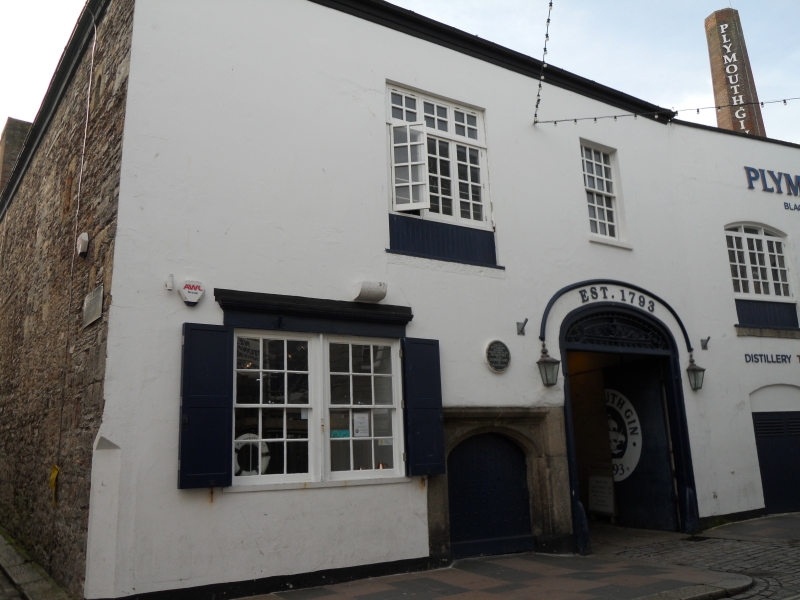 Large merchant's house, later converted to a gin distillery,
now part used as a public house and restaurant. c1500, was
used as a gaol in 1605, as the Congregational meeting house
from 1689-1705 and remodelled and extended as a gin distillery
from 1793. There is no evidence that it was ever used as a
friary (local tradition). Rendered rubble front with some
granite dressings, rubble to left-hand return with many
original granite features; dry slate hipped roofs end on to
the street.
PLAN: Large and complex plan includes a deep original
1st-floor hall range on the left plus the left-hand wall
surviving from a further C16 range at an angle beyond, a
former open courtyard to right of this roofed over in the C18
or C19, right of this another deep range with very thick
walls, presumably original but with no other visible dating
features, and a further deep range at far right probably added
in the C18 or C19. In fact the whole former probable garden
area of the original medieval house is now roofed over.
EXTERIOR: 2 storeys; irregular street front with 6 1st-floor
openings with windows with glazing bars. 3 of the 1st-floor
openings were loading doorways ie. far left and 2 central
openings with segmental heads; towards the left is an C18
hornless 18-pane sash with thick glazing bars above an
elliptical-arched carriage doorway with hoodmould,
wrought-iron fanlight and C18 panelled doors; left of this is
a squat C16 moulded 4-centred arched granite doorway with
carved spandrels and with a heavy studded door. At far left a
late C18 paired sash with thin glazing bars. There is a
doorway under each of the central windows, the one on the
right with a segmental head, right of this is a C20 tall
1st-floor sash with elliptical head, and at far right is a
fixed light with an elliptical head and inverted elliptical
sill above a keyed elliptical-arched wide carriage doorway.
Left-hand return has many original or later C16 openings, now
mostly blocked. There are 4 small round-arched openings on the
right in staggered positions as if for lighting a staircase;
left of this a 4-light window with king mullion, approximately
corresponding to a similar window in the opposite wall and a
4-centred arched doorway which seems to be opposite the arched
doorway of the parallel wall. Left of this the wall changes
its direction and there are more C16 openings including a
4-centred arched doorway.
INTERIOR: front of original hall is now visible within the
former courtyard on its left. This wall contains a number of
original and possibly later C16 moulded granite features, most
with later leaded glazing, some in pointed-arched wooden
frames. There is an original 2-centred arched doorway with
carved spandrels at far right at low 1st-floor level, a small
opening left of this, possibly cut much later, a 2-centred
opening above and to the left, possibly a former doorway, a
square-headed possible door opening with hoodmould at higher
level than the right-hand doorway, perhaps formerly linked to
a curtain wall or an attached wing, an original 4-light hall
window with 2-centred arched lights and central king mullion,
and 2 windows higher up perhaps fitted later. Low down right
of the present undercroft doorway is a chamfered opening
fitted with an C18 hatch and there is another similar opening
right of this behind the steps but only visible on the inside.
The 2 openings which are possible doorways are puzzling
features. The pointed-arched doorway seems to be opposite a
blocked 4-centred arched doorway in the back wall. Perhaps
there was a gallery at this end of the hall and these openings
led to attached buildings or features since removed. If they
were designed as windows then they have no mullions or
provision for mullions, unless the present wooden windows
represent a continuation of the original glazing method.
Rear (left-hand return from street front) of this range
contains many blocked original and C17 features.
The 1st-floor hall contains what is probably the most
important roof in Plymouth, carefully repaired following
damage during the Blitz. The roof is of 8 bays with moulded
arch-braced trusses and butt purlins, the 4 bays to rear also
with moulded purlins and wind braces. Visible high up in the
room below is the relief shape of a blocked 4-centred arched
fireplace. The other roofs inspected are C18 or early C19: the
roof over the former courtyard has pegged tie-beam trusses,
the spaces at rear of the courtyard have king-post trusses.
There are many other features of interest surviving from the
former use as a distillery including a flagged floor of
Plymouth limestone, part of which has a granite runnel.
Although some recording has been carried out by the Exeter
Archaeological Unit, this building deserves an even more
thorough recording exercise combined with further documentary
research in order to fully establish its importance both
locally and nationally.
(The Buildings of England: Pevsner N: Devon: London: 1989-:
661-2; Gill C: Plymouth, A New History: Tiverton: 1993-:
35-37).