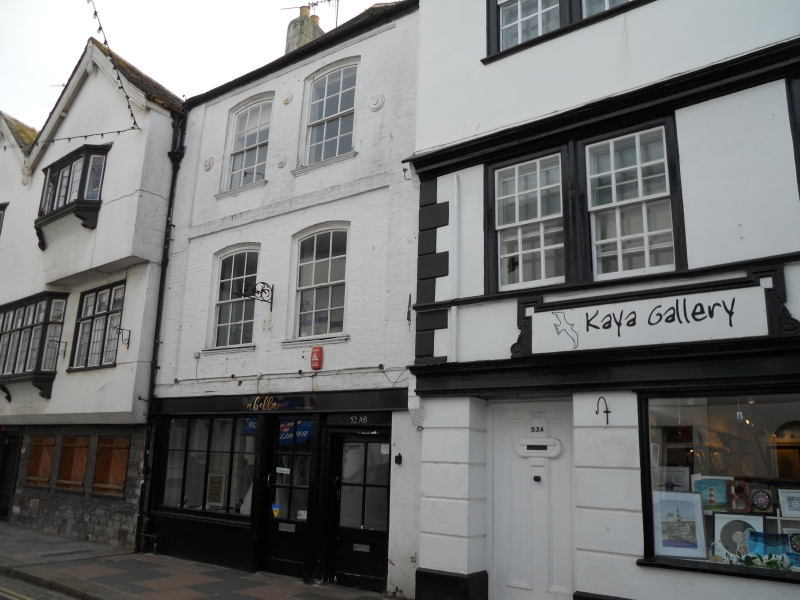 PLAN: Gallery-and-back-block plan consisting of a main block to the street frontage, courtyard behind and rear building, all linked by a gallery (passage). The building consists of three storeys.

EXTERIOR: The street elevation is re-fronted in brick with brick pilasters and plat bands creating two recessed panels to the first and second floors. It has a two-window range with segmental arches over and early-C18 exposed sash boxes with twelve-pane, hornless sashes with thick ovolo moulded glazing bars. The ground floor has an early-C19 shop front with a four-light window with some glazing bars removed; shop doorway towards right and former entrance to passage to far right. The passage doorway retains its architrave surround with ovolo moulding.

INTERIOR: To the ground floor of the front range the rear wall has been rebuilt in concrete block work and the passage subsumed into the former shop. To the first floor is a cupboard with early C18 butterfly hinges, a concealed C17 granite fireplace with hollow chamfered mouldings to the lintel, another of which survives to the second floor. The west wall of the second floor is timber framed with brick noggin. To the centre of the site is a staircase which partially blocks the passage. The stairs to the attic are enclosed by a plank and muntin screen. The rear block is divided into two rooms at ground floor level with fireplaces and evidence of a blocked ten light mullion and transom window to the rear. To the south-east corner are the remains of a newel stairs. To the first and second floor the partition wall dividing the two rooms has been removed. To the second floor is a C17 mullioned window and an C18 fireplace to the front room and a C17 fireplace, wood panelling and a screen to the former newel stair to the rear room. The roofs have been heavily renewed in the late C19/early C20.

REASONS FOR DESIGNATION:
No. 52 Southside Street is designated at Grade II for the following principal reasons:
* As a C17 merchant's house with later alterations a gallery-and-back-block plan
* The retention of some C17 fabric including chamfered granite fireplaces and evidence of the remains of other features including mullion and transom windows, plank and muntin screens and newel staircases
* The re-modelling of the house in the C18 including its re-fronting in brick demonstrates changes in architectural fashion and illustrates the building's evolution.