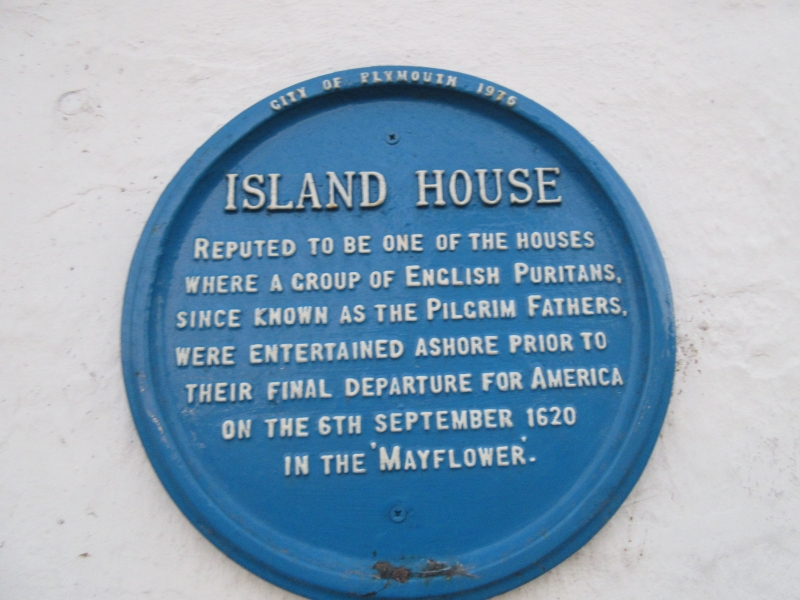 Merchant's house. Late C16 or possibly 1640, the painted date
on a roof truss, and also inscribed I G, possibly the initials
of the builder or of the person for whom the house was built,
however, the inscription may be later than the build date; the
house was extended slightly later in the C17.
MATERIALS: rendered rubble to right-hand side of front,
unrendered rubble to left-hand return, and rear walls;
original gable end front on the left and later gable end front
to right-hand return are plaster on timber frame and jettied
to 1st and 2nd floors; steep dry slate roofs laid to
diminishing courses and with swept valleys, the gables with
moulded barge boards; large rubble stacks: 2 lateral stacks on
the left, the one towards the rear with an projecting
corbelled breast and another to rear towards right.
PLAN: original 2-room-deep plan on the left with
semicircular-on-plan former stair turret towards rear within
the thickness of the wall; later in the C17 the original
rubble wall on the right was replaced with a timber frame
partition between the original house and a 1-room-plan
extension on the right. In the C18 the original staircase was
floored in and a dog-leg staircase was provided to rear
centre.
EXTERIOR: 4 storeys with upper floor partly in roof space;
1:1-bay original front gable end and side wall of later wing
on its right. The original front with central 16-pane fixed
light to gable, over paired C20 copy hornless sashes with
glazing bars to 1st and 2nd floors and ground floor with
slate-roofed canted bay shop window with similar C20 sashes on
the left, and doorway with slate hood with moulded cornice and
6-panel door on the right. Side wall of wing has paired
hornless sashes with glazing bars to 1st and 2nd floors and
bowed shop window with moulded hood to ground floor.
Front gable end of later wing has early C19 canted bay windows
with hornless sashes with glazing bars to upper floors, except
for top floor which has a later horned sash within a moulded

architrave. Ground floor has early C19 shopfront with glazing
bars and wide incised pilasters.
To left-hand return to upper floor is a C17 oak ovolo-moulded
mullioned window, lighting the former stair recess with the
roof sprocketed above.
Rear left has similar 3-light window also to upper floor; the
other rear windows have C18 moulded sills and 12-pane sashes
with glazing bars, those to the central stair position with
C18 sashes with thick glazing bars except for half of one of
them with a later replacement, and the sashes right of this
are early C19 sashes with thin glazing bars.
INTERIOR: retains many original features including oak roof
structures with lap-dovetail-jointed cranked collars and
threaded purlins, the later roof with 2 tiers of collars;
chamfered oak floor beams and joists but with some alterations
for changes to stair position which also involved the resiting
of the partition in the original house but the partition
between the 2 phases of the house is the date of the addition
of the wing. There are two C17 doors with fluted mouldings,
one of which was unhung at the time of the survey during
repairs to the property. The fireplace structures are presumed
to be original but with some alteration to the ground-floor
left and there is now a doorway cut through the ground-floor
fireplace at the rear. The other fireplaces are fitted with
good C18 iron grates or are blocked, and there is an C18
chimneypiece to one of the blocked fireplaces. The C18 dog-leg
staircase has a closed string, ramped handrail and turned
balusters.
HISTORY: it is reputed that it was at this house that the
Pilgrim Fathers slept before sailing to America.
Island House is a good example of a jettied merchant's house.
(The Buildings of England: Pevsner N: Devon: London: 1989-:
663).