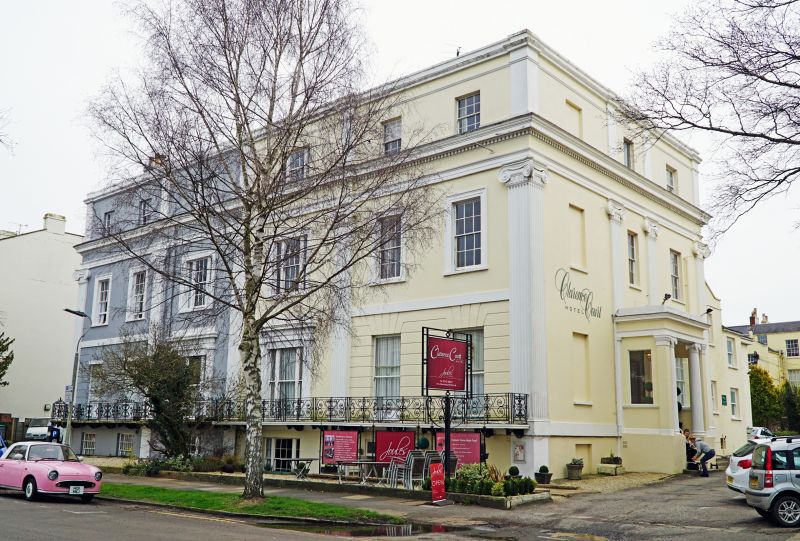 2 houses, now flats and hotel. 1837-8. Stucco over brick with
concealed roof and stucco end and ridge stacks (at left).
EXTERIOR: 3 storeys with basement, 4 bays (6 first-floor
windows arranged 2:1:1:2), with service range to rear. Centre
2 bays break forward slightly. Stucco detailing includes
horizontal rustication drawn into voussoirs over windows to
ground-floor outer bays; first-floor band surmounted by fluted
Ionic pilasters through ground and first floors, architrave,
frieze and dentil cornice; above these are pilasters with
frieze and cornice, blocking course. Ground floor: outer bays
have 1/1 sashes; centre bays have 1/1 sashes with side-sashes
each in pilastered architrave with frieze and cornice. First
and second floors: outer bays have 6/6 sashes; otherwise 6/6
between 2/2 sashes, those to first floor are taller and in
tooled architraves, all with sills. Basement has tripartite
6/6 between 2/2 sashes to centre and 8/8 sashes. Entrances
(alike) set back to returns, 4-panel, part-glazed door with
overlight in distyle porch with Ionic columns in antis.
Returns have 3 first-floor windows and 3 fluted, full-height
Ionic columns.
INTERIOR: retains original joinery including shutters to some
windows, otherwise not inspected.
SUBSIDIARY FEATURES: 2 continuous 2-bay balconies have
scrolled-heart motif.
HISTORICAL NOTE: built as part of the development of this area
undertaken for Joseph Pitt in 1825-42, the general layout
being designed by John Forbes. Wellesley Court Hotel was
originally known as Ross House. Clarence Square was laid out
in the late 1820s, building began in 1832. The Square was
named after the Duke of Clarence, who became William IV in
1830.
(Blake S: Pittville: 1824-1860: Cheltenham: 1988-: 62).