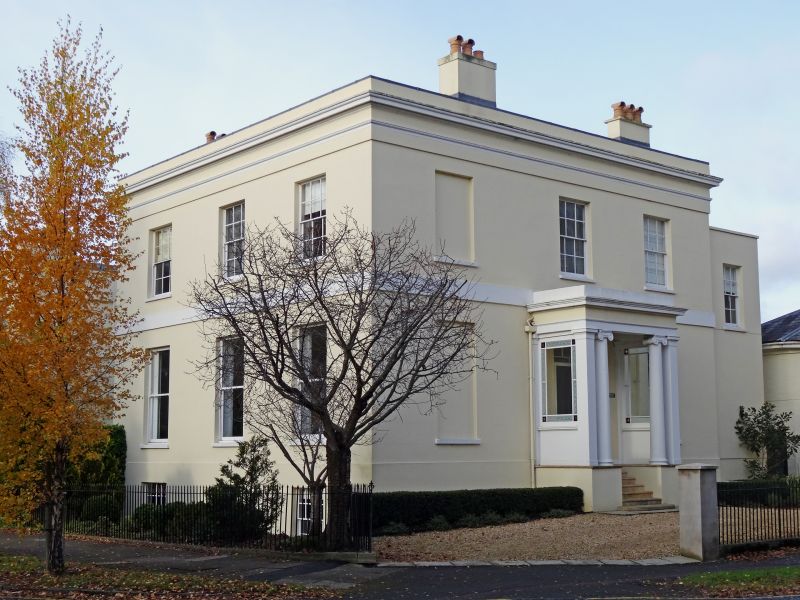 Villa. 1834-5, probably by Robert Stokes, architect. Lot
purchased by John Brend Winterbotham, solicitor, for »330 in
1834 and house occupied by him until his death in 1881. Stucco
over brick with concealed roof and tall stucco lateral stacks
with cornices.
EXTERIOR: 2 storeys with basement, 3 first-floor window range,
with recessed, 2-lower-storey, single-window service range at
right. Garden (south) facade of 3 first-floor windows. 6/6
sashes throughout ground and first floors, except to east
facade a blind opening to left. Basement has 8/8 sashes. East
facade has central porch with Ionic columns in antis, frieze,
cornice and blocking course, and glazing with margin-lights to
sides. Flight of steps to 4-panel door with side-lights and
overlight with glazing bars.
INTERIOR: inner hall has a part-glazed 4-panel door with
side-lights and overlight with glazing bars; embellished
cornice has egg-and-dart frieze and cornice with acanthus
modillions. Otherwise not inspected.
HISTORICAL NOTE: built as part of the development of this area
undertaken by Joseph Pitt in 1825-42 (the Pittville Estate),
the general layout being designed by the architect John
Forbes. Clarence Square was laid out in the late 1820s,
building began in 1832. The Square was named after the Duke of
Clarence who became William IV in 1830.
(Sampson A and Blake S: A Cheltenham Companion: Cheltenham:
1993-: 30; Blake S: Pittville: 1824-1860: Cheltenham: 1988-:
37,62).