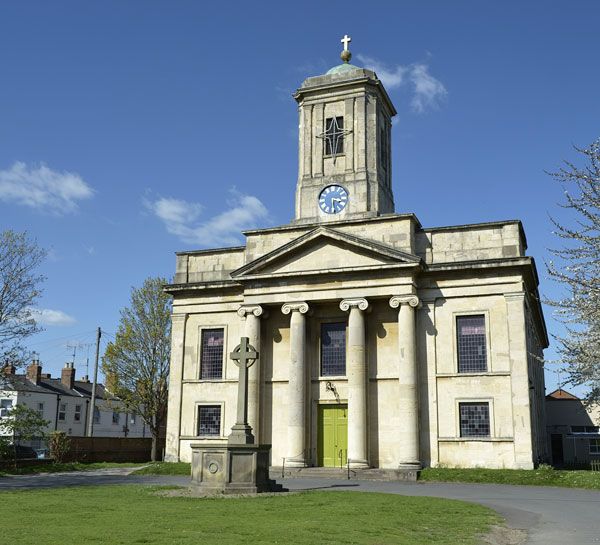 MATERIALS: constructed of pinkish-brown brick in English Garden Wall Bond, with ashlar facing to the west (actually south) front, and ashlar dressings. The concealed pitched roof is covered with lead sheeting. The windows are multi-paned with leaded lights.

PLAN: the church is rectangular on plan with a galleried nave, chancel, tower and a vestry which was extended in 1917 when the north chapel was added. Late-C20 additions to the north side and north-west corner.

EXTERIOR: the church is built in a Greek Revival style, with details based on the Temple at Ilissus. The south front is of three bays and has a continuous entablature and a tall parapet with copings. There are sill bands and tooled architraves to the openings. The outer bays have end pilasters and square-headed windows to each storey. The central bay has a pedimented tetrastyle Ionic portico which breaks forwards, and steps lead to a pair of panelled entrance doors within tooled architrave. There is a window with similar architrave above the entrance. The tall pilastered clock tower has an entablature and is surmounted by a cupola with a finial. The returns (west and east) have seven bays articulated by pilasters which interrupt the sill bands. There are square and rectangular windows with tooled architraves in two storeys, and a crowning entablature. The entrances to the first bays have double four-panel doors. The liturgical east (actually north) end, which is divided into bays by pilasters, breaks forward at the centre, with a continuous entablature. There are single-storey brick additions to the north-west corner and north elevation.

INTERIOR: there is a scrolled lamp bracket over the main entrance. The interior is dominated by the large galleries with Georgian mouldings and panelled balustrades supported by slender cast-iron columns. The ceiling is flat in a single span with elegant five-light, wrought- iron chandeliers at balcony level, and single lights to the galleries. The shallow sanctuary is separated by a segmental panelled arch. Much of the east end is decorated with panelling by W E Ellery Anderson, completed in 1932-6 in memory of the Revd. T H Cave-Moyle (Rector 1904-27), and incorporates screen of 1917 by L W Barnard. The east window of 1906 which depicts the Ascension and the flanking painted panels are probably by J Eadie Reid. The north chapel has timber panelling, rails and a panelled ceiling installed in 1932 in memory of the Revd. T H Cave-Moyle (Rector, 1904-27).

FITTINGS: moveable wrought-iron pulpit of 1904-5 which can be pulled out on runners to the centre of the sanctuary arch, a circular stone and marble font of 1863, and an organ, of 1831, by John Gray of London. Stained glass depicting the Ascension to the east window, 1906, probably by J Eadie Reid; north window to north chapel by Edward Payne, 1962.

Plans to build the ‘free’ Church of St Paul were initiated in 1825 by Revd. Charles Jervis as a church for the 'artisan classes in the poorer quarter' of Cheltenham (see Verey & Brooks). A site was donated by Joseph Pitt and a fifty per cent grant for the building was obtained from the Church Building Commissioners. The financial crisis of December 1825 disrupted plans for a Free Church and it was not until 1827, when Revd. Jervis’ successor, Revd. Francis Close, took over the plans for the new building, that the town's economy had recovered sufficiently to revive the scheme

John Forbes, who designed the Pittville Pump Room (Grade I) in Cheltenham of 1829-31, was appointed as architect of St Paul’s. It is understood that there were some objections to his design within the Church Building Committee. The neo-Classical design, broadly based on the Athenian Temple of Ilissus, Athens, was intended to aggrandise the area; while the original plan was for a church of brick with ashlar facing, this was later limited to the west facade alone in order to keep costs down. Local builder, Edward Cope, laid the foundations in 1829, but the whole project was halted by the Parish Vestry's attempt to relocate the church. This was later rejected and building had recommenced by spring 1830. The church was completed in 1831 with 1,230 of its sittings set aside as free, with all the sittings in pews.

The church was refurbished in 1863 with new pews and a circular stone font, while a wrought-iron pulpit was inserted in 1904-5. Later additions and alterations, including the east window and panels, were completed in 1906. In 1917 the vestry was extended and the north chapel was built to the designs of the Cheltenham-based architect L W Barnard. The north chapel was refurbished in 1932 by R L Boulton & Sons of Cheltenham. During the 1990s a faculty was obtained to remove the pews from the west end, to create a kitchenette in the north-west corner, and to relocate the font to the south-east corner. The font was not in the end moved. A subsequent faculty was granted in 2009 for the removal of the pews and north chapel, relocation of choir stalls, font rail and lecterns, creation of a stage and the installation of underfloor heating. The work was completed in 2009 by Mark Benson Ltd of Cheltenham.

The Church of St Paul which dates from 1829-31 and underwent some additions and alterations during the C20 is listed at Grade II* for the following principal reasons:
* Architectural interest: for its well-executed and striking Greek Revival design, with an imposing portico, broadly based on the Athenian Temple of Ilissus, and a tall, domed tower;
* Interior quality: although it has been re-ordered, the interior is spacious and well-lit and demonstrates a skilful use of materials and detailing;
* Fittings: notable fittings include the font of 1863 and an unusual, early-C20 moveable pulpit set on runners; the original galleries are also a significant survival.