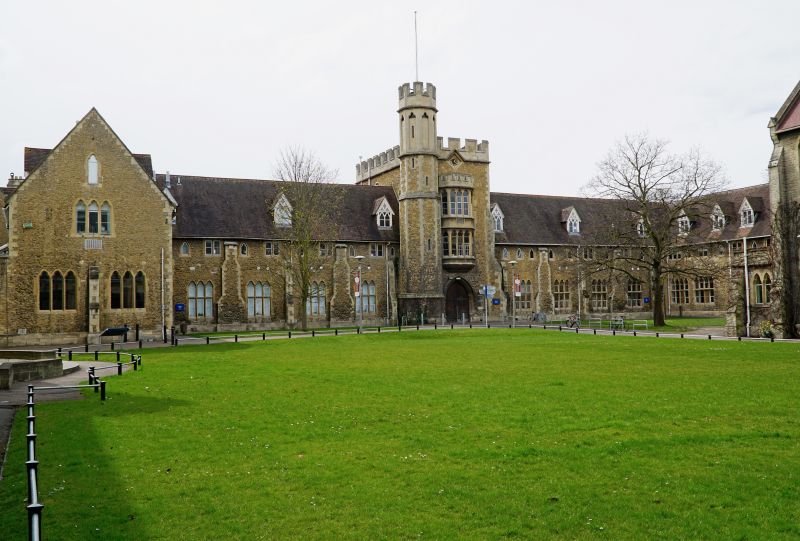 Training college, now part of Cheltenham and Gloucester
College of Higher Education. 1849 with later additions and
alterations. Architect, SW Daukes. Stone with ashlar dressings
and plain tile roof. Quadrangular plan with rear projecting
blocks.
EXTERIOR: 2-storey central porch with octagonal tower between
single-storey, 4-bay ranges and with outer 2-storey-and-attic
gabled blocks with 2 first-floor windows and further outer
porches to recessed ends. 3-storey porch to rear range. Quoins
to angles. Buttresses between bays. 3- and 4-light mullion and
transom windows, those to ground floor with cusped heads, in
double-chamfered surrounds and with hoodmoulds, some with
foliate or head stops. Central pointed entrance has studded
plank doors with hoodmould. Similar fenestration to return
elevations with chamfered, straight-headed mullioned windows.
Rear porch with tower, similar pointed-arched opening with
castellated 2-storey oriel with 4-light mullion windows. The
quadrangle has castellated breakforward to ground floor; first
floor has alternate 2-light and single-light cusped windows.
INTERIOR: simply detailed with stone staircases. Porch has
quadripartite vault with chamfered pointed archway and plank
studded doors.
HISTORICAL NOTE: Founded as 'an Institution for the training
of masters and mistresses upon scriptural and evangelical
principles in connection with the Church of England'. The
grounds, together with »500, were donated by Miss Jane Cook.
This site houses 82 male students. St Paul's Training College
is often regarded as the greatest achievement of Revd Francis
Close, incumbent of the parish Church of St Mary (qv).
A very fine Gothic Revival composition, this being the style
chosen for other Church Training Colleges built in the period,
such as at Bristol.
Forms a group with Entrance Lodge, Gates and Boundary Wall
(qv).
Verey states, 'the best C19-20 Gothic work (in Cheltenham) is