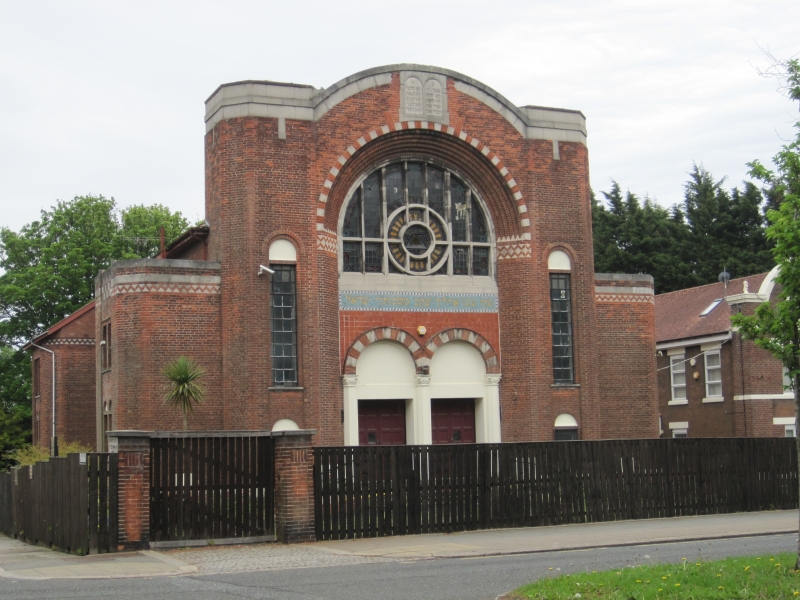 Synagogue of The Sunderland Hebrew Congregation. 1928 by Marcus K Glass, altered by insertion of Bimah in 1968.

EXTERIOR: All windows are metal framed with stained glass. Main front (west) elevation facing Ryhope Road has a tall central round arch with brick chamfered sides and a stepped brick arch and lozenge patterning level. Within this there are two central round headed doorways with 3 octagonal painted stone half-columns with capitals and alternating brick and stone voussoirs to each arch. The pairs of double doors are panelled with large fanlights above with stained glass including Magen David symbols. Above this there is a mosaic band inscribed with the Hebrew liturgy Ma Tovu. Above this there is a large 7-light round headed window with tracery and stained glass containing a large central Magen David. Above the main arch there is a stone plaque with the Luhot, and above this a broad segmental arch with stone parapet. To either side there are octagonal towers with single small round headed windows with blank fanlights, and above these similar tall round headed windows with original metal casements. The towers are topped with bold stone parapets. To either side are lower wings with chamfered ends decorated with a band of zig-zag brick work and plain stone bands to the parapet. The end façades to these wings each have a pair of basement windows with linking cill, above a pair of round headed windows with blank fanlights and above again another pair of windows all with metal frames. Side elevations have a deep basement with a stone band above and three tall plain pilasters between 3 windows. The basement has pairs of windows with a central doorway and porch to the south and above this 3 pairs of windows, each with a blank round headed fanlight, and 3 pairs of plain windows above. Rear (East) elevation is largely blank with a large round headed 7-light window.

INTERIOR: largely intact with original wooden doors and flooring surviving throughout; bimah added centrally in 1968. The entrance lobby has original doors and staircases with iron balustrades and wooden hand rails giving access to the upper galleries where women were accommodated. The Prayer Hall is spanned by a deep barrel vault over the central aisle; the gallery runs around three sides carried on slender iron columns with palmate capitals. The panelled gallery fronts bear Magen David symbols and several metal chandaliers hang from the ceiling which also incorporate Magen David symbols in their design. The east end of the Prayer hall is raised up by six steps and contains the Holy Ark with a decorative painted and gilded plasterwork canopy with chevron patterned columns and cushioned capitals. Central octagonal wooden desk with carved and painted decoration and blind round arched arcade to the rear. All windows have very fine and bright stained glass with abstract patterns and Magen David symbols. There is a full compliment of original dark oak pews with individual arm rests to the Prayer hall and galleries. The basement room retains original stage, original doors and iron columns supporting cross beams.

SUBSIDIARY FEATURES: two original entrances to the site retain their paired brick gate piers to which are fixed double iron gates, each in the design of a Menhora.

HISTORY: Sunderland once possessed an extensive and thriving Jewish Community which was the oldest in the North East of England. During the C18 after migrations from Holland and Germany, the Jewish Community centred on a small house in Vine Street, off the High Street (now demolished) which was converted into a simple place of worship. Sunderland Hewbrew Congregation was founded in 1791 and formalised in 1821. In 1855, Moor Street in the east end of the town, which supported almost the whole of the Jewish Community, was chosen as the site for a new Synagogue by J Tillman in 1861-2 (now demolished). The once busy shipping port was on the routes from the Baltic ports and from the 1880s it received migrations from the Russian Empire escaping pogroms and poverty, and Sunderland became a bastion of religious orthodoxy. In recent years the Jewish community has dwindled away from Sunderland to other cities and the large community of Gateshead.

With the movement of the Jewish population towards the wealthier western side of the city after the First World War, it was agreed that a new Synagogue was required in the western districts and powers were given to buy the site at Ashburn Estate Ryhope Road. The Synagogue was designed by Marcus Kenneth Glass, a Newcastle based architect who designed a string of Synagogues in a similar and distinctive cinematic style including Jesmond Synagogue, Newcastle (1915) and Clapton Federation Synagogue, London (1931-2). His style is characterised by colourful facades with corner towers, polychrome brickwork and Byzantine features and mosaics. Sunderland Synagogue which had cost £11000 to construct was opened on 8th December 1928 by the Lord Mayor of Hull. An adjacent small detached school building was constructed and opened in December 1936. Originally, the Ark, Bimah and Pulpit sat on a platform at the east end but in 1968 the Bimah was inserted into the centre of the Prayer hall and the rest of the furnishings were also reordered at this time.

REASONS FOR DESIGNATION: Sunderland Synagogue is designated at Grade II for the following principal reasons:

* While the modern Art Deco styling of the exterior is not continued to the more traditional interior, the individual elements of the building are well designed and executed lending it considerable architectural interest

* Despite the insertion of a central Bimah and the reordering of other furnishings in 1968, it retains a good quality and largely complete interior

* Overall, it contains some elements of fine quality including the Plasterwork canopy of the Holy Ark and the collection of fine, brightly coloured stained glass present in its windows

* Magen David symbolism is present throughout the Synogogue in its fixtures and fittings and the stained glass. This is enhanced by the design of the main gates in the form of the Menhora