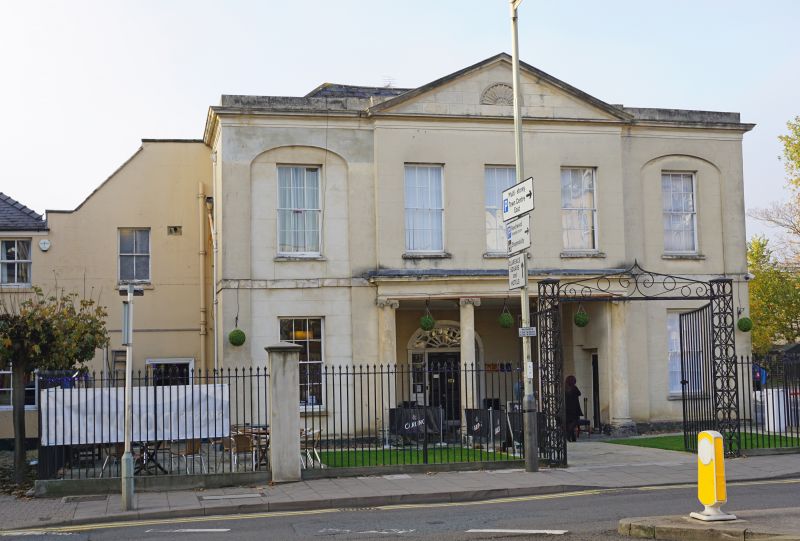 House, now club. c1805, for Theodore Gwinnett, a prosperous
local attorney and Clerk to the Commissioners, probably with
earlier, mid-C18 origins, and with later additions and
alterations including late-C19 snooker room to rear; further
late-C20 range to rear of no special architectural interest.
Ashlar over brick with hipped slate roof.
EXTERIOR: 2 storeys, 5 first-floor windows arranged 1:3:1, the
centre breaks forward and is pedimented with ground-floor
tetrastyle Ionic loggia with frieze and cornice. First-floor
band. Crowning frieze, cornice and central pediment with fan
motif. Outer windows in full-height elliptically-arched
recesses. 6/6 sashes throughout, in plain reveals and with
sills. Cental entrance within loggia a 6-panel door (upper
panels raised and fielded, lower panels have fluted surrounds)
with fanlight and radial glazing bars. Right return has
full-height canted bay, the ground floor retains 6/6 sashes,
that to centre is round-arched and has Gothic glazing to head.
First floor has 2/2 sashes with central 'fanlight', otherwise
blind openings.
INTERIOR: retains many original features including central
large hall with open-well staircase with barleytwist-on-vase
balusters and carved tread ends and with ramped and wreathed
handrail, end newel post. Panelled shutters to windows. First
floor has plasterwork including at centre, egg-and-dart
cornice and ceiling frieze. Roof retains purlins and rafters.
HISTORICAL NOTE: Gwinnett subsequently built No.38 Evesham
Road (qv).
Little states that this is `one of the best designs, with its
Ionic loggia-cum-porch and its subtly recessed windows, among
Cheltenham's rich treasure of single Regency villas of the
1820s or before'.
(The Buildings of England: Verey D: Gloucestershire: The Vale
and The Forest of Dean: London: 1970-: 149; Little B:
Cheltenham: London: 1952-: 63-64).