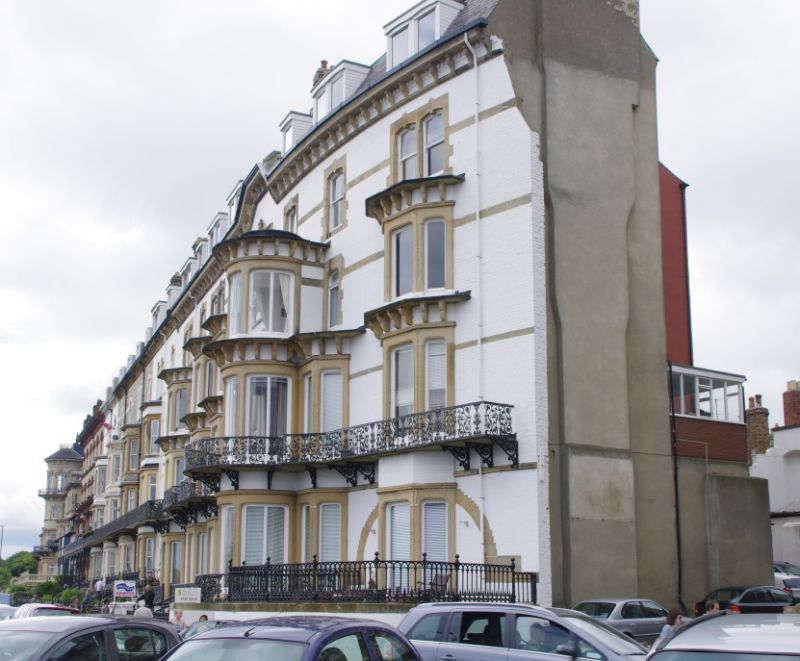 Hotel, now flats, with railings. 1863-7, altered C20, probably
by John Ross of Darlington, for John Anderson (Resident
Engineer for Saltburn Improvement Company).
MATERIALS: painted white firebrick from Pease's West
brickworks at Crook, Co Durham, with sandstone ashlar
dressings; coated Welsh slate roof with bands of fishscale and
brick chimneys.
PLAN: terraced, with 3 right bays; slightly convex in plan.
EXTERIOR: 4 storeys, attics and basement; 7-window range in
irregular bays. Steps up to C20 panelled door in fifth bay
quasi-Venetian stone surround, with side and overlights to
door, plain glazing to side windows and blocked segmental
light under stopped dripmould. Renewed glazing in
basket-headed stone surrounds of all windows except those on
top floor.
Canted bay windows through basement and 3 floors in bays 1, 3,
4 & 7. Single lights in second bay; round turret projects from
sixth, to right of entrance, with canted side windows on
ground and first floor and single flanking lights on second.
Top floor has keyed segmental heads to sash windows in plain
stone surrounds.
Entrance bay has individual treatment with tripartite stone
mullion and transom window rising through first and second
floors, the transoms with carved quatrefoil bands, and
Venetian top window with shafts and keyed stopped dripmould.
Ground and first floor have elaborate cast-iron balconies,
with flowing forms, on iron brackets except in seventh bay
where ground-floor window projects from stone relieving arch
and the first-floor balcony is in line with the first-floor
window sill instead of projecting to follow the line of the
window as in other bays. Long brackets to cornices over first
and second floor canted bays.
All floors have impost bands. Eaves gutter cornice on long
brackets resting on string, raised to form half gable over
entrance bay.
Mansard roof has inserted or renewed flat headed dormers and

large corniced brick stacks.
Entrance has square, corniced piers at foot of steps, with
elaborate balustrade supporting iron handrail.
INTERIOR: not inspected.
SUBSIDIARY FEATURES: area railings of arcaded iron with spike
dogbars in front of first 6 bays; similar railings on high
area wall in front of seventh bay curve to join gable wall.
HISTORY: built on site laid out to 1861 plan by George
Dickinson for the SIC and purchased by Anderson. When opened
in 1867 the hotel had 100 rooms.
(Industrial Archaeology Review: Spring 1980: Harrison JK and
Harrison A: 139; Wilson CS: The History of Saltburn: Saltburn
by Sea: 1983-: 65).