A Grade II* Listed Building in Saltburn-by-the-Sea, Redcar and Cleveland 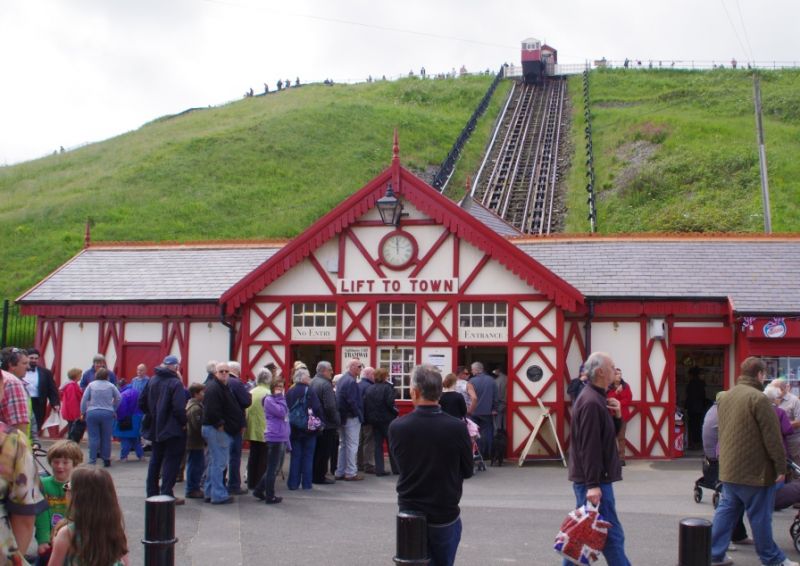 Inclined tramway pay office and engine room, with waiting room
now a shop. Opened 28 June 1884 for the Owners of the
Middlesbrough Estate, correctly the Owners of the Saltburn
Estates. Timber-framed front with painted render infill;
rendered rear and sides; roof of light grey slates with
pierced terracotta ridge cresting.
PLAN: cruciform.
EXTERIOR: single storey, 3 wide bays. Central gabled bay has
Dutch doors to central pay desk and boarded doors to flanking
turnstiles. Diagonal timber bracing to panels of framing, with
overdoor panels blank; framing clock in gable peak.
Bargeboards of pendant shaped sections with high turned spike
finial. Engine room at left has boarded door; shop at right
has shallow square projecting central bay, flanked by door at
left and decorative framing at right, under catslide roof.
Roof of central bay runs back to form gable over rear of
cabin. All ridges have cresting and finials.
Returns have pendant bargeboards in same style as central
front gable.
INTERIOR: not inspected.
HISTORY: the third such system built in Britain, and the
earliest surviving example. The first two, now demolished,
were in Scarborough. Engine pumps water into cistern at top of
cliff, from which it is transferred into upper carriage when
weight is needed to allow descent. The lower carriage is
pulled up by the descent of the upper. The water supply comes
from a spring in the cliff.
(Wilson CS: The History of Saltburn: Saltburn by Sea: 1983-:
85; Industrial Archaeology Review: Spring 1980: Harrison JK
and Harrison A: 150; Lambaurgh District Council: Saltburn's
Inclined Tramway (leaflet) quotes Cleveland News; Tighe MF:
Cliff Lift, Saltburn by the Sea, Cleveland (typescript notes):
Mere, Wilts: 1992-).