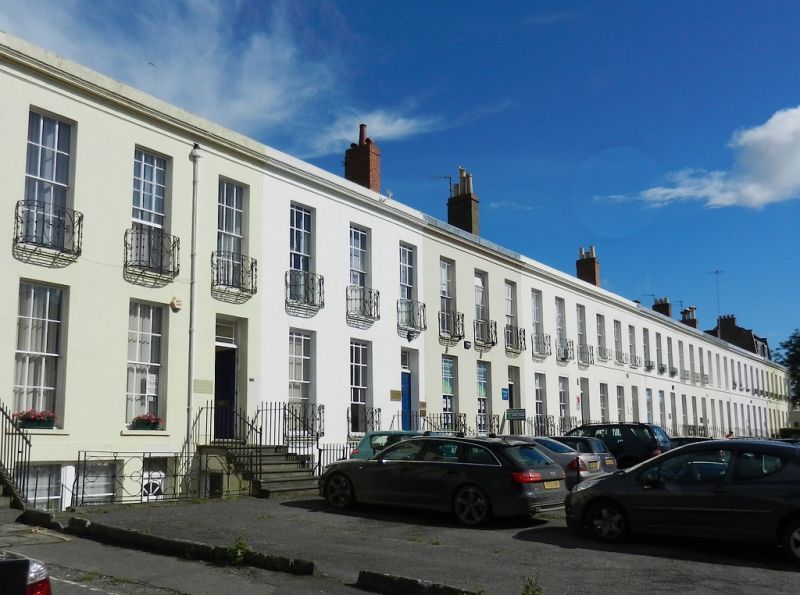 Terrace of 21 houses, now houses and offices, and attached
area railings. Numbered right to left, described left to
right. c1809-1820, shown on the Post Office Map of 1820 and
clearly defined as Rodney Terrace on Merrett's Map of 1834.
Stucco over brick with slate roof (mansard to No.17) and brick
party-wall stacks (where remaining); cast- and wrought-iron
railings and balconies. Double depth plan with side hallways.
EXTERIOR: 2 storeys on basements and with attic to No.17; 63
first-floor windows (3 per house). Stucco detailing includes
first-floor band where original, continuous crowning frieze,
cornice and blocking course. Mainly 6/6 sashes where original,
some 2/2 horizontal-pane sashes and 4/4 sashes with
margin-lights; windows to ground floor are taller; blind boxes
remain to several windows. Entrances to right (entrance to
No.55 now blocked): flights of roll-edged steps where original
to 6-fielded-panel doors with overlights, mainly with
margin-lights. Basements have mainly 6/6 sashes and doors with
divided overlights. Attic has roof dormers with 3/3 sashes.
INTERIOR: original joinery remains including panelled shutters
to some windows; embellished architraves with incised Greek
key moulding and cornice; dogleg staircase with stick
balusters and wreathed handrail to No.51; otherwise not
inspected.
SUBSIDIARY FEATURES: area railings remain throughout, Nos 15
and 17 have Web design to balcony, probably supplied by Carron
Company; otherwise X-motif, stick balusters and lancets with
anthemion and urn finials to stanchions. To sides of steps are
lancet railings. Individual balconies and window boxes to many
first-floor windows have scrolled lozenge motif, embellished
rods with central oval with scrolled lozenge, and embellished
road with scrolled lozenge motifs. Nos 31, 33 and 35 also have
window boxes to ground floor.
HISTORICAL NOTE: Verey notes that Rodney Terrace existed by
1832.