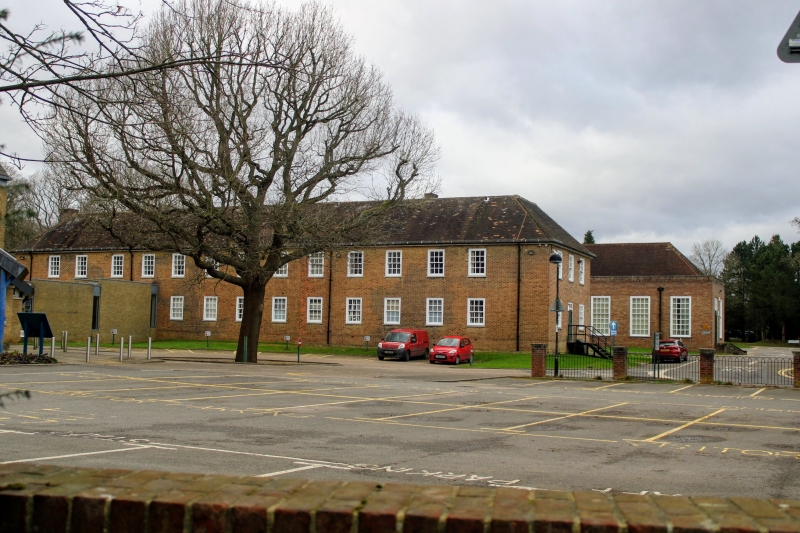 Officers' mess, now council offices. 1939, based on a type design by A Bulloch, architectural advisor to the Air Ministry's Directorate of Works and Buildings. Stretcher-bond brick to cavity walling with hipped plain tile roofs and brick stacks. PLAN: central entrance/recreation block with services and dining room to rear, flanking accommodation wings attached at right angles and extending to rear. EXTERIOR: Neo-Georgian style. The front elevation has 3-window fronts of 2-storey accommodation blocks flanking the single-storey central block of 5:3:5 bays, the 5-bay central porch broken forward and with semi-circular arched entries with similar arches over half-glazed inner doors with fanlights; tall 12/16-pane sashes to flanking recreation rooms, their juncture with the hall marked by tall stacks. The 3-window fronts to the accommodation wings, which have 6/6-pane sashes and 13-window outer elevations, each have a central stack with swept flanks set above a similar arched door with tile imposts. INTERIOR: central block retains original plasterwork, including moulded cornicing, and joinery, including half-glazed doors, to hall and flanking recreation rooms; latter have bolection-moulded surrounds to chimneypieces. Dining room to rear has cornicing to ceiling, which is subdivided into panels. HISTORY: West Malling constitutes one of the stations built for Fighter Command and planned during the latter stages of the inter-war expansion of the RAF. In contrast to the post-1933 Luftwaffe, whose stations at home were solely designed for training purposes and whose principal role abroad was close army support, the inter-war RAF had eschewed temporary fabric and envisaged future wars as being fought from fixed and secure bases rebuilt in permanent materials. The first phase of this scheme, the principles of which were debated and established in the Salisbury Committee of March 1923, took place under the guiding hand of General Sir Hugh Trenchard, who formed the RAF as the world's first independent strategic air force in April 1918 and who ranks, along with America's Billy Mitchell and Italy's General Douhet, as the most important advocate of the doctrine of offensive deterrence in the inter-war period, and one which was to determine the controversial policy of Bomber Command during the Second World War.
His scheme involved the construction of offensive bomber bases in East Anglia and Oxfordshire, sited behind an `aircraft fighting zone' some fifteen miles deep and stretching round London from Duxford near Cambridge to Salisbury Plain. It was the latter which accounted for the rebuilding of several bases around London which owed their origins to the First World War. Although political and financial factors had prevented the completion of Trenchard's scheme, it was the collapse of the Geneva disarmament talks, in 1933, which prompted the government to embark, from 1934, on its largest inter-war expansion of the air force, phased in order to ensure parity with the Luftwaffe and deployed with training and storage bases sited behind an eastern front facing Germany. A satellite of Biggin Hill within Fighter Command's strategically critical 11 Group, West Malling was opened in June 1940, although a series of raids in August 1940 rendered the airfield unservicable for much of the Battle of Britain. It reopened in October of that year, becoming a nightfighter station with Bristol Beaufighters in 1941, and later used by Mosquitos and Typhoons in offensive operations in northern Europe; it became a key station during Operation Diver' in 1944, the name given to the defence of the east and south-eastern coasts against the V1 bomb. The mess forms part of an exceptionally well-preserved group of buildings on the domestic site which are strongly representative of the neo-Georgian and Art Deco type designs characteristic of the 1930s expansion period. Whilst the design of Trenchard's stations displayed a stark utilitarian architecture which, apart from the Garden City inspiration for station married quarters, owed much to the army background of the designers who worked from the office of the Air Ministry's Directorate of Works and Buildings, it was the need to integrate the fundamental principle of dispersal against air attack which made airfield planning markedly different from the formal and more condensed layouts of naval or army barracks. This is exemplified, for example, in Trenchard's requirement for the crescent as opposed to previously linear planning of hangars, and the officers' mess designs which separated out the functions of mess and recreation rooms and accommodation in order to obviate the risk of a single run of bombs destroying a building and its occupants. It was in this context that Ramsey McDonald, as Prime Minister, had instructed that the Royal Fine Arts Commission be involved in airfield design, and that a process of consultation with the Air Ministry resulted in the creation of the new post of architectural advisor to the Director of Works and Buildings, first occupied by A Bulloch in October 1934, with many of the early (1934-5) building designs being specifically approved by the commissioners; afterwards, liason over layout and other matters was personally handled by Lutyens. The buildings erected for much of the 1930s Expansion Period were, as a consequence, more carefully proportioned than their predecessors, a clear distinction being made between neo-Georgian for domestic buildings and more stridently modern styles for technical buildings. From 1938, and coinciding with Bulloch's replacement by P M Stratton, new buildings and stations, including Middle Wallop and West Malling, made increasing use of concrete and flat roofs in order to respectively speed up the building process and counter the effects of incendiary bombs.