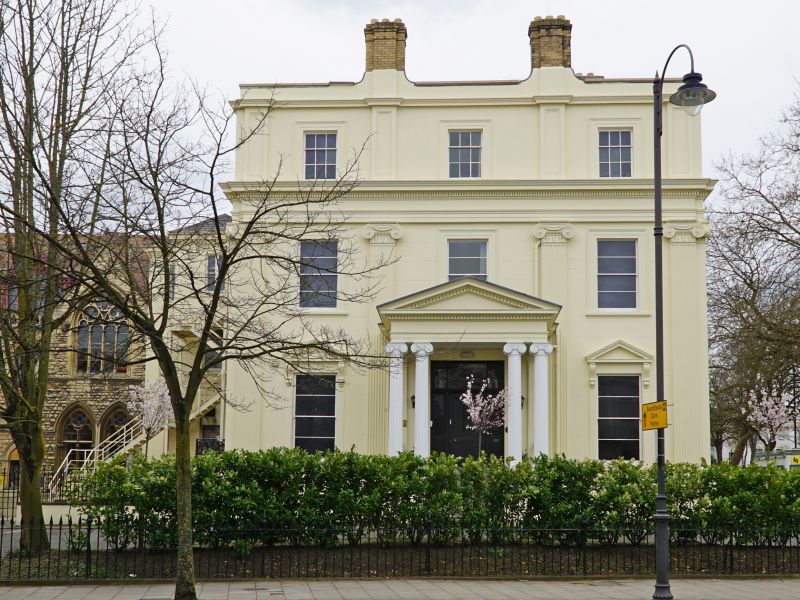 Villa with attached railings. 1847 By Samuel Onley for Dr
Charles Fowler. Stucco over brick with concealed roof, gault
brick front and rear stacks; iron railings and balconies.
EXTERIOR: 3 storeys with basement and attic, 3 first-floor
windows. Fluted Ionic pilasters through ground and first
floors surmounted by dentil entablature over first floor. 2nd
floor has panelled pilasters. Ground floor windows have
pediments on console brackets. Mainly 2/2 horizontal-pane
sashes with 3/6 sashes to second floor. Basement has 6/6
sashes. Central Ionic portico with coupled fluted columns and
dentil pediment; flight of steps to 6-panel door with
overlight and side-lights. Right return has 3 first-floor
windows; stucco details include end Ionic pilasters and
similar treatment to windows. Similar 2/2 horizontal-pane and
3/6 sashes.
INTERIOR: noted as retaining original joinery and plasterwork
including panelled shutters to windows.
SUBSIDIARY FEATURES: left return has balcony to ground floor
with ornate scroll motif. Attached railings to right and left
with alternate rods and fleurs-de-lys finials.
HISTORICAL NOTE: the Bayshill Estate was developed by a joint
stock company which purchased land from the Skillicorne family
in 1837 which was bankrupt by c1845. Onley bought much
Bayshill property including the Royal Old Wells, and so
Pevsner suggests that other houses in Bayshill Road were built
to his designs.
C20 range to rear not included.
(The Buildings of England: Verey D: Gloucestershire: The Vale
and The Forest of Dean: London: 1992-: 147; Sampson A and
Blake S: A Cheltenham Companion: Cheltenham: 1993-: 28).