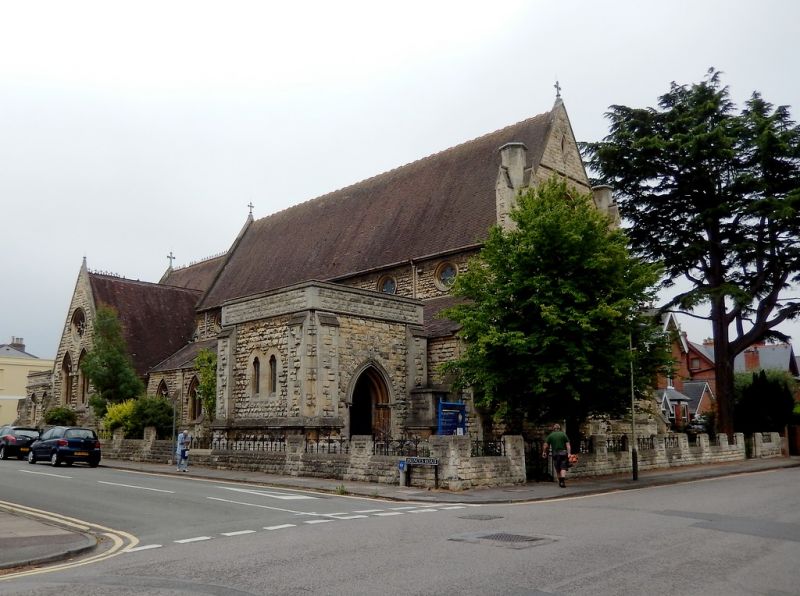 An Anglican church built in 1873-83 to a design by John Middleton, in the Decorated style, with later-C19 and early-C20 additions.

An Anglican church built in 1873-83 to a design by John Middleton, in the Decorated style, with later-C19 and early-C20 additions.

MATERIALS: rough-faced local stone with ashlar quoins and dressings in Bath stone. Architectural embellishments are in contrasting blue Forest stone and red Mansfield stone, as well as red granite and marble; the pitched roof is covered in plain tiles and has decorative ridge tiles and coped gables.

PLAN: a cruciform plan that consists of a six-bay aisled nave with a north and south porch at the west end, a two-bay north and south transept and a single-bay chancel with an attached vestry (north) and Lady Chapel (south).

EXTERIOR: the church is built on a chamfered plinth. The majority of the windows are set within pointed-arched openings with trefoil, quatrefoil and cinquefoil detailing. The west end has a central gable with buttresses either side that are topped by octagonal platforms, and a central half-height buttress supporting a statue of St Stephen with a canopy above. Above the statue is an oculus decorated with trefoil and quatrefoil detailing. On either side is a two-light window with a pointed arch on redstone columns and a hoodmould. The gable end is surmounted by a stone cross. The central bay is flanked by the west end of the aisles, each of which includes a two-light window. The south pitched-roof porch has a doorway with three orders of arches on slender redstone shafts topped with roll moulding, and a pair of plank doors with ornate hinges. Above the arches are two foliate-carved roundels that flank a statue of St Stephen. Within the porch is another archway and plank door, similar to the main entrance. The flat-roofed north porch has a doorway and door in a similar style to the south porch. The left return has three lancet windows and, to the rear, a stair turret and a further plank door. The aisles have six bays divided by buttresses and each bay includes a two-light window under a hood mould. The clerestory above both aisles contains a row of oculi. The south and north transepts each have a pair of two-light windows and a rose window to the apex, as well as an entrance on the returns facing the nave. The east elevation has a central gable framed by buttresses and a large, central, east chancel window. The window includes four lights, two trefoil oculi and a central rose light, all within a pointed-arched opening and topped by a hoodmould with square stops. Flanking the gable end are two single-storey wings. The vestry (to the right) contains a plank door, two lancet windows and, on the right return, a pair of two-light windows. The Lady Chapel (to the left) has three lancet windows with trefoil heads and one on each of the returns, and a commemorative stone at the base inscribed ‘TO THE FALLEN/ 1914-1919’.

INTERIOR: the interior is decorated with polychromatic stonework. The west end wall incorporates an arcaded screen (moved from the east end in 1897), decorated with statues of the "eleven faithful apostles" and Christ in an ornate canopied niche above. On either side of the nave are stone arcades with a row of six pointed arches constructed of two orders of arches in alternating blue Forest and white Bath stone voussoirs, supported by clusters of blue stone columns. Slender corbelled shafts support the trusses of the wooden barrel-vaulted ceiling, which is decorated with raised panels. The double-chamfered chancel arch has similar alternating coloured voussoirs; the inner arch is supported by marble columns with foliate corbels. The chancel is richly decorated; pairs of polished corbelled stone shafts support the carved arch-braced trusses. On either side of the chancel are arcades supported by marble columns with foliate capitals. The north arcade contains the organ, beyond which is the vestry. The south arcade is glazed and beyond is the chapel, reordered in the mid-C20 as a First World War Memorial Lady Chapel. The east wall of the chapel is inscribed with the names of the Fallen, and beyond the arch is the eastern apse which contains the chapel altar. A wooden screen by Barnard (1925-6) separates the transept from the aisle.

PRINCIPAL FITTINGS: there are a number of notable fixtures and fittings. These include the stone and marble font located in the south west corner. The north porch contains a painted statue of St Stephen. Middleton designed some of the key internal fittings including the altar and the panelled tracery pulpit. The wrought-iron chancel screen was designed by H A Prothero and added in 1897. The stained glass windows include work by Burlison & Gryllis, Heaton, Butler and Bayne, T F Curtis, Ward & Hughes. Windows by J Eadie Reid, originally placed in the early-C20 Lady Chapel apse, were reset in 1963 into the south transept. The canopied figures of King Alfred and Queen Victoria flanking the east chancel window were added by H H Martyn & Co. in 1914. The hanging rood by E A Roiser was added 1947. The panelling within the Lady Chapel, added 1929-30, is by W E Ellery Anderson. Other fittings include an organ, brass lectern and silver foundation trowel.

The foundation stone for the Church of St Stephen was laid in 1873 by Charles John Ellicott, Bishop of Gloucester and Bristol. It was first built as a chapel-of-ease in response to the growing population in the district of Tivoli. It was designed by John Middleton, the builder was George Parsonage and the contractor was W Jones of Gloucester. The church was built in phases, starting with the construction of the chancel between 1873-4. The north transept was added a little later in 1876. It soon became clear a larger space was needed for the congregation, and between 1881-3 the nave and aisles were added. The north porch was added in 1885, and the south porch a year later. The south transept was finished in 1888 and the north transept enlarged in 1891-2 to include a vestry. A planned tower above the north porch was never built. At first the church was furnished with chairs but pews were gradually acquired through donations and by August 1888 all of the chairs had been replaced with pews. In 1919-20 the south transept was fitted out as a war memorial and The Lady Chapel, designed by L W Barnard was added to its east end. The chapel was dedicated on 9 May 1920 by Edgar Charles Summer Gibson, Bishop of Gloucester. The hanging rood, by E A Roiser, was added in 1947 in memory of the fallen of the Second World War; this is commemorated by a memorial plaque within the nave bearing the names of the Fallen.

John Middleton (1820-1885), started out as a pupil of James Pritchett in York and set up his own practice in Darlington in the 1840s. In later life he moved to Cheltenham where he designed several churches within the town. He also worked throughout Gloucestershire, in neighbouring counties and parts of Wales, working on a variety of architectural projects. Middleton’s ecclesiastical work includes St Mary’s, Cheltenham (Grade II*), St Peter’s, Cheltenham (Grade II*), and his most notable church design, All Saints, Cheltenham (Grade I). St Stephen’s Church was the last church he designed and was his smallest. After his death his practice continued under various names including Prothero & Phillot (1885-1908); Phillot & Barnard (1908-1912) and L W Barnard & Partners (1919-1950s).

The Church of St Stephen, Cheltenham is listed at Grade II* for the following principal reasons:
* Architectural interest: it is a particularly well-detailed and well-executed example of a late-C19 church in the Decorated-style with good detailing and use of materials;
* Architect: its principal designer, John Middleton, is a nationally important late-C19 architect, well-known for his impressive ecclesiastical work;
* Interior: it has a particularly high quality interior which utilises polychromatic stonework and contains a number of notable fixtures and fittings by designers including Prothero (Middleton’s partner), H H Martyn & Co. and E A Roiser;
* Group value: it has strong group value with the boundary walls and gates (Grade II).