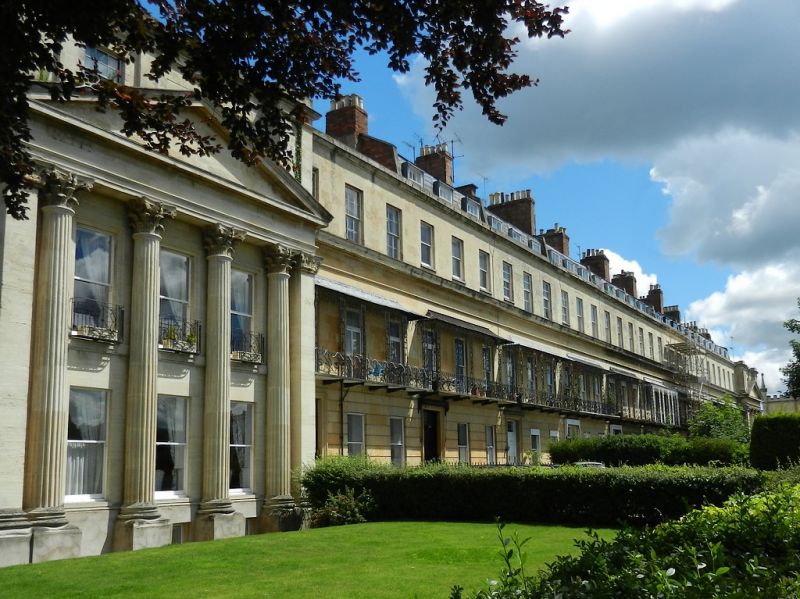 Terrace of 12 houses and attached railings, now hotel (to
left) and flats. 1832-48 with later additions and alterations.
Probably more by Edward Jenkins than by JB Papworth to whom it
is normally attributed. Ashlar over brick with slate mansard
roof, tall brick party-wall stacks and iron balconies,
verandahs and railings.
PLAN: symmetrical terrace terminated each end by a large house
with Classical details; full- and almost full-height service
ranges to rear.
EXTERIOR: 3 storeys on basements and with attics, 3
first-floor windows each. Ashlar detailing: end houses
articulated by 2 outer Corinthian pillars and 4 fluted
Corinthian columns in antis to ends and between windows) and
anta caps carved to match through ground and first floors,
with pediment; continuous entablature over first floor; to
second floor are pilasters to end ranges with continuous
crowning entablature and blocking course; inner range has
horizontal rustication to ground floor. 6/6 sashes where
original (taller to first floor) in plain reveals and with
sills; attics have dormers with 3/3 sashes. Basement has 6/6
sashes. Entrances: end houses have entrance to returns,
otherwise to left and right: 2 roll-edged steps to
8-fielded-panel double doors with overlights with
margin-lights (where original). Returns: 5-window ranges with
further additions. That to left (Willoughby) has end
breakforwards articulated through 2 floors with Corinthian
pilasters and continuous entablature; mainly 6/6 sashes, that
to centre of first floor an 8/8 sash with entablature and
cornice on consoles, second floor has 2/2 horizontal-pane
sashes, all in plain reveals and with sills; blind boxes
remain to ground- and first-floor windows at right end.
Central entrance in porch with 2 pairs of Ionic columns and
entablature, 8-panel door between sidelights and with
overlight. Right return plainer, 6/6 sashes, one 8/8 sash;
central solid porch with paired Ionic pilasters and
entablature, round-arched opening with 8-panel door with
sidelights within. Rear retains 6/6 and 8/8 sashes, some 6/6
between 2/2 sashes.

INTERIOR: Willoughby (No.1) at left has inner door with
decorative glazing and overlight with circle and inverted
teardrop glazing bars. Open-well staircase has brass
balustrade and over-rail, mahogany handrail; domed skylight to
hallway; to ground floor at front cornice with grape frieze;
marble fireplaces; original joinery including panelled
shutters to most windows. Otherwise not inspected.
SUBSIDIARY FEATURES: end houses have first-floor individual
balconies with web design. Otherwise first-floor verandahs to
each house with Carron Company double-heart-and-anthemion
motif balustrade and lyre and scroll to uprights, tent roofs.
Area lancet railings.
HISTORICAL NOTE: the terrace was designed to have attached
Corinthian columns at centre as well as at ends, but when
built the end bays were given pediments and the central
columns omitted.
Suffolk Square occupies land bought by the Earl of Suffolk
from the de la Bere's and on which he had built Suffolk House
for his own residence, his daughter later sold much of the
land. In 1823 developer James Fisher acquired land for his
Suffolk Estate. Shown as partly built on Merrett's Map of
1834.
All the listed buildings in Suffolk Square form a very
distinguished group.
(Chatwin A: Cheltenham's Ornamental Ironwork: Cheltenham:
1975-1984: 35).