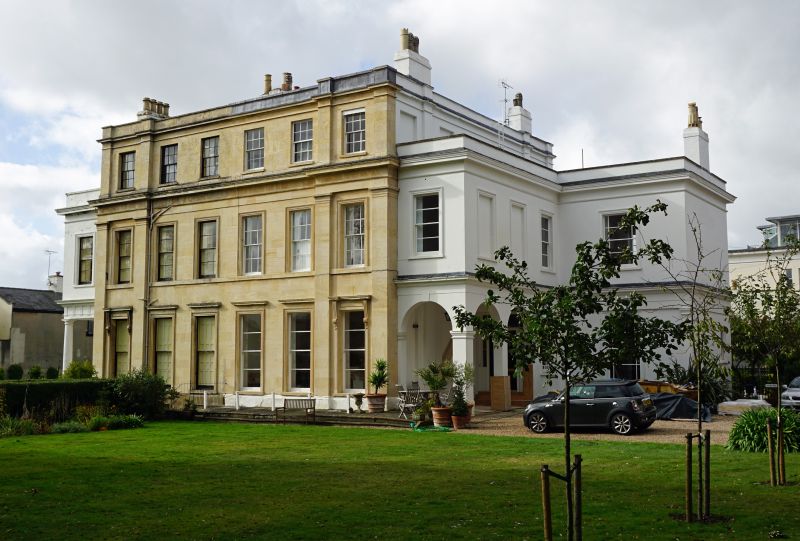 Pair of semi-detached villas, now house to left and flats to
right. c1823-34 with later additions and alterations including
later C19 range to left. Ashlar and stucco over brick with
concealed roof and stucco end and ridge stacks.
PLAN: double depth with stairwell between front and rear
rooms.
EXTERIOR: main range of 3 storeys on basement, 5 first-floor
windows, between 2-storey entrance bays and with 2-storey bay
set back to left. End bays of main range break forwards and
have pilasters to angles through ground and first floors
surmounted by continuous entablature, with further pilasters
to second floor and crowning entablature with blocking course.
Ashlar detailing includes tooled architraves to windows, those
to ground floor with frieze and cornices. 6/6 sashes where
original, to left set-back bay at ground floor a tripartite
window with 2/2 sashes, all in plain reveals and with sills.
Basement has 8/8 sashes. Entrances: that to left in open Doric
porch with triglyphs and metopes (surmounted by first floor);
8-panel door with overlight. To right and 8-panel door with
sidelights and overlight in round-arched arcade.
INTERIOR: retain many original features, that to left (No.22)
has open-well staircase with rod and bobbin balusters.
Plasterwork includes deep friezes and ceiling friezes; ceiling
roses. Joinery includes panelled shutters to windows with
tooled surrounds; architraves to doors with Greek key motif
and cornices. Room to left addition has cornice with grapes
and shields, white marble fireplace. Otherwise not inspected.
HISTORICAL NOTE: Suffolk Square occupies land bought by the
Earl of Suffolk from the de la Bere's, on which he had built
Suffolk House for his own residence, his daughter later sold
much of the land, on which Suffolk Square now stands,
developed by James Fisher from 1823. Many villas shown as
built on Merrett's 1834 Map.
All the listed buildings in Suffolk Square form a very