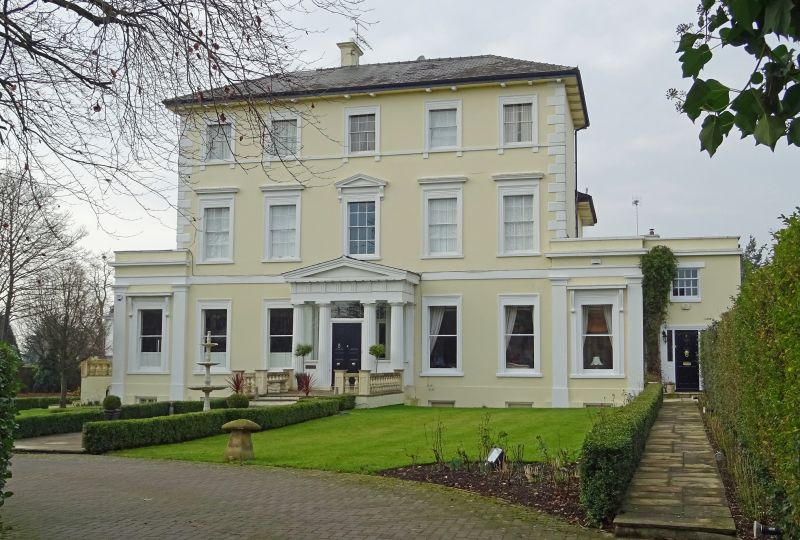 Villa, now part of Cheltenham and Gloucester College of Higher
Education. c1823-34 with later additions and alterations
including probably late C19 range to rear. Probably by Edward
Jenkins for developer James Fisher. Stucco over brick with
hipped slate roof and off-centre rear stucco stack with
cornice. Double depth plan with central hallway and extension
to rear.
EXTERIOR: 3 storeys on basement, 5 first-floor windows with
single-storey ranges to sides. Stucco detailing includes
first-floor band, second-floor sill band; tooled architraves
to windows, those to first floor have frieze and cornice, that
to centre has pediment. 6/6 sashes where original, in plain
reveals and with sills, those to second floor on feet; blind
boxes remain. Central entrance in pedimented tetrastyle Doric
porch with fluted columns and triglyphs and metopes, now
glazed with double part-glazed doors with sidelights and
overlight with glazing bars; within are 6-panel double doors
with sidelights and overlight. End ranges break forwards and
have pilasters to angles and crowning entablature, replacement
1/1 sashes, in tooled surrounds with cornice on console
brackets; further range to right has C20 glazed doors. Left
return has three 6/6 between 2/2 sashes. Extension to rear has
2-storey canted bay with 1/1 sashes.
INTERIOR: retains many original features including central
hallway with Minton tile floor and open-well staircase with
iron balustrade with circle-and-lozenge motif balusters,
wreathed mahogany handrail, egg-and-dart with acanthus
cornice, skylight. Original joinery includes panelled shutters
to window and panelled doors. Otherwise not inspected.
HISTORICAL NOTE: Suffolk Square occupies land bought by the
Earl of Suffolk from the de la Bere's, on which he built
Suffolk House for his own residence; his daughter later sold
much of the land, on which Suffolk Square now stands. James
Fisher acquired land for the development in 1823. The Square
is shown as built on Merrett's Map of 1834.
All listed items in Suffolk Square form a very distinguished