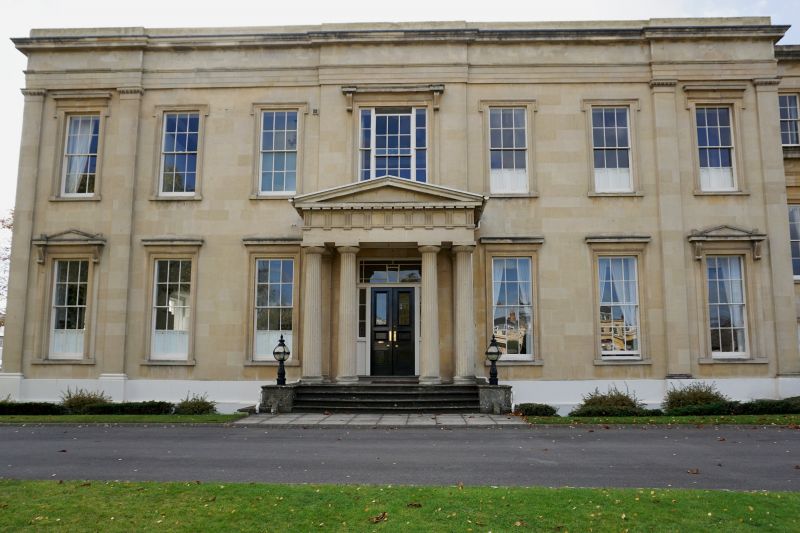 Also known as: Suffolk Mews SUFFOLK SQUARE.
House, now flats. 1832, with later additions and alterations.
Architect, Edward Jenkins. Ashlar over brick with concealed
roof. Double depth plan with central hallway and range at
right.
EXTERIOR: 2 storeys, 7 first-floor windows arranged 1:2:1:2:1;
with 2-storey-on-basement, 7-first-floor window range to
right. Main range: end and centre breakforwards. Ashlar
detailing includes pilasters with egg-and-dart caps to end
breakforwards; tooled architraves to widows, those to ends at
ground floor have pediments on console brackets, otherwise
ground floor windows have frieze and cornice; first floor
widows have eared architraves, those to centre and outer bays
have frieze and cornice, that to centre on console brackets.
6/6 sashes, that to centre, first floor a 6/6 between 2/2
sash, in plain reveals and with sills. Basement has 6/6
sashes. Central entrance has flight of roll-edged steps to
pedimented Doric portico with 2 pairs of fluted columns and
entablature with triglyphs and metopes. Within a 6-panel
double, part-glazed doors between sidelights and overlight
with margin-lights. Range to right has end Doric pilasters
through 2 floors and to next two windows, crowning
entablature; pilaster strips to second floor, crowning frieze
and cornice with blocking course. All windows in tooled
surrounds, that to first floor at centre has cornice on
consoles, otherwise eared architraves to first floor. Central
window is tripartite, with 6/6 between 2/2 sashes to first
floor and 3/3 between 1/1 sashes to ground floor; otherwise
6/6 sashes. Rear has 4 tripartite windows with 6/6 between 2/2
sashes. Left return has 3 first-floor windows: either blind
openings or replacement 6/6 sashes.
INTERIOR: retains original joinery including panelled shutters
to windows; open-well staircase with lozenge and oval iron
balustrade and wreathed handrail; otherwise not inspected.
HISTORICAL NOTE: Suffolk Square occupies land bought by the
Earl of Suffolk from the de la Bere's, on which he built
Suffolk House for his own residence, his daughter later sold

much of the land, on which Suffolk Square now stands to
developer James Fisher. The Square is shown as planned but not
complete on the Post Office Map of 1820.
Abuts Montpellier House (west part) to right.
Part of a very distinguished group of buildings in Suffolk
Square.
(Blake S: Notes).